I didn't mean to disappear. I thought I'd be online in Oxford but it didn't work out. And I would really have written because there was a lot to write about concerned with the subject of this diary. Israel doesn't seem to be the total pariah any more. It was clear where ever we went. Take for instance a tiny incident in the Oxford art museum yesterday. I was chattering away in Hebrew with Ezi, have little good to say about the installation, and the clerk suddenly says, "so how are things over there in my favorite country?" Now I would normally take a phrase like this ironically, assume that i was in for a difficult conversation at best and a dangerous situation at worst. But no. It was not at all ironic.

How can this be? Luck of the draw? Don't think so, although i really wasn't in a situation to run into the usual malevolent suspects. It was just people on the streets of Oxford, students, etc. In the toilet of "Freud's" (a very strange cafe-restaurant that one time had amazing food and the other time claimed not to have the coffee we drank the day before) the graffitti was in Hebrew. This in itself means nothing, but it was indicative of the mood I didn't see the last time I was there.

Freud's, by the way, was a church until 12 years ago and still has the stained glass windows. Here's a picture of the nave from the altar: 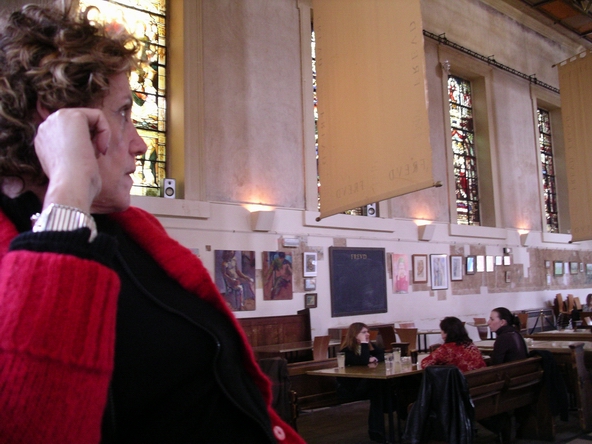 Now my problem is with the name. It might have been connected somehow to psychoanalysis and the concept that religion is the opiate of the masses, and this would rationalize and validate the amusing use of a church. But I had an uncomfortable feeling about the association of lack of respect for a religion with a jewish name.

The flight from Tel Aviv to London, by the way, was very comfortable. 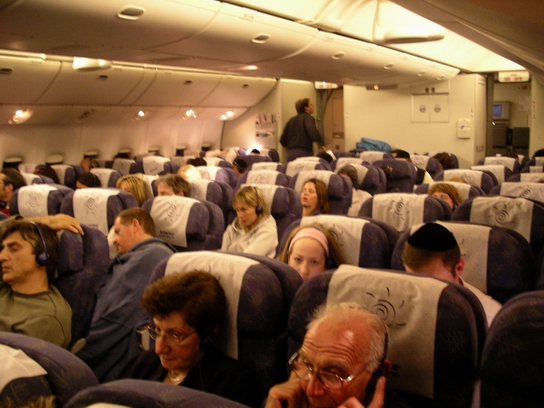 The return flight was more crowded, and without the individual screens, and it made me too nervous to sleep. The worst part of it was that I was so tired I left the new shoes I bought at duty free on the plane and they disappeared. "Gee, I'm sorry," the girl at El Al lost-and-found said, "I wish they'd have turned up."

At least the food was good both ways. We all agreed about that.

Ides of March. Although I managed to function yesterday I spend part of the morning in bed and watch TV. It helps me to catch up, although there isn't anything that happened that wasn't predictable - settlers heating up, others losing patience with them - no dialogue.

to go back a bit. roy wrote that he was happy to see the coffee machine from Taibe, but he had never seen any of the other pictures. Here's one of Roy and Amal: 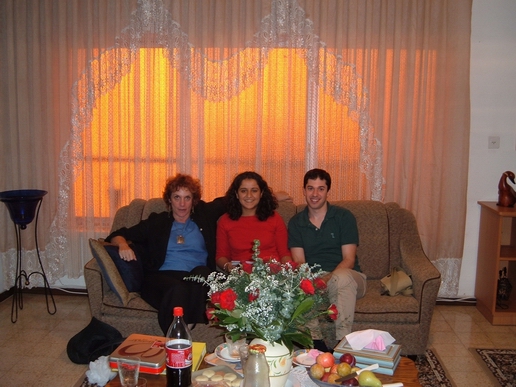 I also owe you some pictures of the Dead Sea, but can't seem to find anything anymore.

The new Ya'd Vashem: I didn't want to see the opening ceremony, not even on TV. But the TV was on. Then I heard Alex Ansky's voice, a voice I had heard over a very happy dinner last week, reading a section of an anguished letter from a holocaust victim. The voice was so personal, so pained, a man who wanted only that others might remember that he existed once. The voices of individuals: "each person has a name" said the poet Zelda in a poem that echoes constantly in this country, and now these voices emerging in the new museum shows us how much we lost in not having a chance to know these people when they lived.

Here's another voice: I'm reading the Hebrew translation of Carl Sandburg, that amazing American poet who seems almost unknown today. Moshe Dor has done a very poetic and accurate Hebrew collection of Sandburg, and I highly recommend it.

p.s. my lost new shoes turned up in the laundry.

Tel Aviv University students are finally moving on something - The passivity of the faculty I sometimes understand because our salaries are dependent on the whims of the administration, but the students? What do they have to lose? Here's the latest piece on it. For the first few years we (the faculty) voted to support the administration, but the cuts keep getting deeper and deeper and higher education could just go out the window if we don't do something drastic. And to the question about arranging the priorities in economic crisis I say you can't build any kind of good economy without trained people, people educated to think and be creative.

The student protest will I hope focus on two levels - the educational ministry, which has systematically diminshed the universities for the past decade, and seems to have held Tel Aviv University in the greatest of contempts, and the university administration, which has not placed responsibility and blame in the right places.

But now the president of the university is calling a meeting of all students and faculty on Sunday morning. This is a good step - if we join together to save the university, it just might work.

That's it, i'm having my birthday party at mishmish. i can't think of anywhere i'd rather go, any food i'd rather eat. if you need details, let me know.

Yesterday while I was at Nona, I couldn't stop eating - lasagna, apple pie, washed down with my favorite soda: passionflower. I wanted to have a quiet conversation with my friend but people kept coming by to whom I owed phone calls. Usually people leave you alone if you're deep in conversation, but yesterday nothing stopped them. Maybe it was the easy weather, so pleasant for March. "You can't bother to call your mother's friend to see whether she's alive?" an elderly jewish poet brought out the first stage of guilt in me. "So when is your next performance?" Some well meaning lady asked me (a common question now that we're on a haitus, but sad to me because i don't think we'll be able to get together for a show until late June.) "You really should keep performing or people will forget your group!" Another person,also elderly, advised. "And you're too thin." All these questions, this interference reminded me of the question, "Why don't people have sex on the streets of Tel Aviv?" and the answer is....

Because everyone would be stopping to give advice. 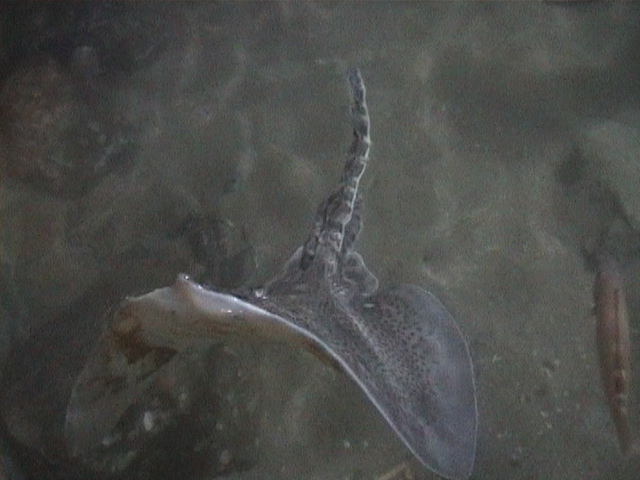 (There is also a video) I figure if fish can communicate with me, then anything is possible.

But it is no surprise that the faculty are going along with the students. we have had it too. i even have the text of the sign i want to make:
בואי בואי בואי לימור
בואי תסיימי אצלנו את התואר


or Come Limor and finish your degree with us. (You have to admit that a Minister of Education without a BA is problematicg)