Once again we are in court today over the silly plastic-burlap car roof we set up for 4 cars in the back yard. So three seventy-year-old retirees sit before the judge it court. Sometimes all five of us come - the spouses of the accused (one is a widow and one couple has two cars), all sun-freckled and worn-out, and explain again politely that the parking spots are registered as our property in the land offices, and that the roof between the cars is connected for aesthetic purposes, and there are thousands of car ports like this in the city. And then the judgement is postponed for another six months and we all go home, exhausted.

My goodness, is it the Ides already? It was such a terribly hot day that people collapsed all over in the marathon. One even died, and many more just had heat stroke. And I slept through most of it, it seems. Through the final discussions of forming a government, through the potentially breezy afternoon in the park, through a few conversations I might have had on the phone. Heat can do it to you, I'm told. So can overwork.

The Land of Israel Museum has an incredible exhibition on Ethiopia. The colors are astounding. This quilt, for example, made by Ethiopian men, is something like 4 yards wide. 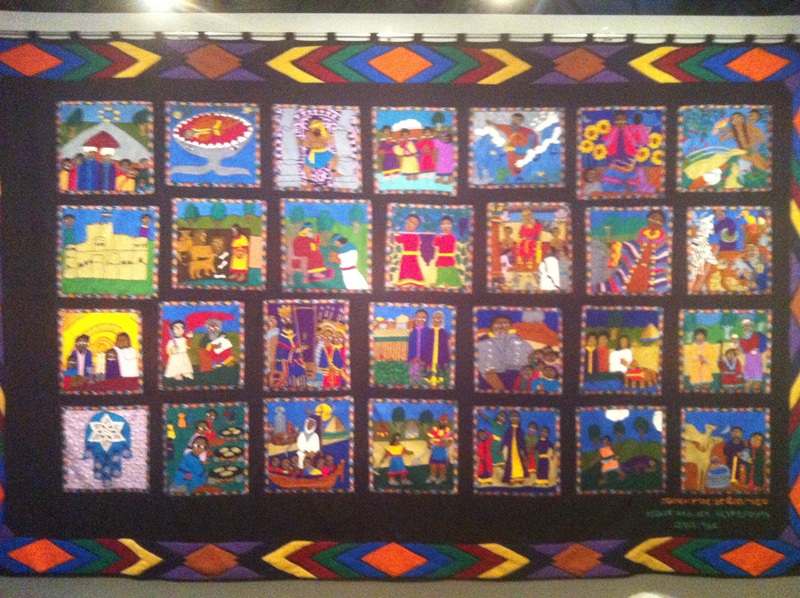 There was too much for me to absorb in one visit. So much history, so many religions. So many different artifacts. Even the simple powerpoints of places in Addis Abbaba were beautiful.

But we were so worn out we had lunch on the spot.

We braved the jungle that our little shopping center has become with the holidays. It was tough. The worst part is that I am registered with many of the shops and because this month is my birthday I get all kinds of discounts. And even though I need nothing, I get into the incredible shopping fever around me.

(The weather that has been so hot for the past week turned cool on us today and on Tuesday will go up again. This makes for touchy sinuses and vulnerable lungs and even those who braved the winter are coughing again. This makes shopping and the close crowds even more dangerous.)

With all this shopping and talk about holiday meals you'd think we're an affluent culture, but we got calls this week from five charities devoted to feeding the hungry. We used to give to each one of them, but in the past year we've been waking up to suspicions that all the charities seem to be based in Petach Tikva... and maybe have the same address...