Last week I was on the radio at 1 in the morning on ōziporei Leila.ö if you lovely ladies have nothing better to do, you might want to listen to it. The program started at 12, but I only joined them from 1-2. The program is on temptation and is in Hebrew: podcast

How remarkable to talk about temptation - only a week ago - and now it seems so irrelevant to me - all i can think about is when will they bring out the zilzals and I'll have to cower in the shelter together with the southern half of this country. True, we have the iron dome, and it works most of the time - because we've got these kids in the army that grew up on "angry birds" and so have quick electronic responses - but not all the time. And my responses are not all that quick anymore.

(cough cough) barely able to move - but it's clear i'll be better by tomorrow. the problem is will i have infected my delicate partner?

250 rockets were sent to us in the past couple days. Do you think they just wanted to tell us something? Is it possible that someone wants to kill the residents of the south? We killed 25 - 22 were terrorists - and three were fashlot. I wish the accidents hadn't happened, but the real consideration is that we are very carefully targeting people who want to do us ill, and the rockets that fall on our heads are meant to fall on any one - women, men, children, Jew and maybe even Arab etc. It is pretty shocking to read about it in the Times - where they call it a crossfire and report losses in Gaza. The ceasefire tonight was put in place an hour ago - since then 12 rockets have fallen here. The Islamic Jihad isn't listening to Hamas. No one was hurt but that's because we have the iron dome and when that fails the population seems to be prepared. In Ashkelon yesterday for instance, the woman whose car went up in smoke obeyed the recommendations here stopped the car and sought shelter.

In the meantime another hundred people were killed today in Syria - why the newspapers don't highlight those statistics is beyond me. I was particularly impressed by Robert Mackey's blog in the Times since it shows the confusion in getting the truth.

Another person who impressed me today is Noam Shalit. He's running for representation on the labor party ticket and has no concrete agenda, only an approach that is humanist and thoughtful. I watch him blunder through an interview and liked him more from minute to minute. Precisely because he blundered through specific issues, and made his answers dependent on the conditions of the moment. He won't make a good prime minister yet, but he's a thinking person.

Ezi spent another morning seeking for details about his treatment tomorrow. Details like where, what time, and with whom. When he finally went down to the hospital to make sure he had all the papers necessary, it turned out he was missing a few forms that no one told him he needed and no one know for sure what they were. But he finally got everything in place for the first part of the treatment and by tomorrow morning, I'll be able to get the forms for the second part while he's having the first part...

The Ides of March worked for our benefit today. Ezi sailed through rituxin and zevalin and we were home by 1. Oren brought us food and I was wiped out and took a nap for a few hours. Ezi was full of energy,

Even though I'm pretty elated about Ezi's treatment the rockets are still falling around here and Islamic Jihad in enjoying the Russian Grad missiles they're terrifying us with. And the possibility of nuclear war doesn't make me feel great either.

Except for one missile it was pretty quiet today - but it's all temporary. As Ezi reminded me when i came home with two pairs of orthopedic shoes, "It's not the shoes that are the problem, it's the feet."

Want to see a great poem by Ronny Sommek? Here it is in English:

In the days when there was respect for train tickets
And they were printed on no less than green cardboard,
Uncle Salim would produce from his jacket pocket
A little stack heÆd gathered at the Haifa Station
And helped us to imagine a steering wheel as wide
as the width between our hands.
We closed one eye, held the hole in the ticket close
for a second, and saw through it
a red tie sharp as a sword, that he wore
to diminish the shame of the rail workersÆ khaki.
Then he would breathe in the memory
of the locomotive of another country,
And the cars full of stories from the Tigris and Euphrates ,
They would breathe air cleaner than the moth ball atmosphere,
That clung to the suitcases of memory of the new immigrants

ōThe train to Eden,ö he heard
before he died,
ōLeaves in three minutes,ö
Just in time to load the cars
With the 99 years of his life,
The top hat he loved to move from side to side
And the leftover applause
he always saved for the voice of Abdel Al-Wahab.


Translated and copyrighted by Karen Alkalay-Gut

What an extraordinary day. It was supposed to be exceedingly cold, and Ezi is still recovering from the zevalin, but we decided to take a ride to nearby Apollonia, to see what they've dug up lately.

It was warm and sunny and Apollonia was a wonderful lesson in the history of this land. 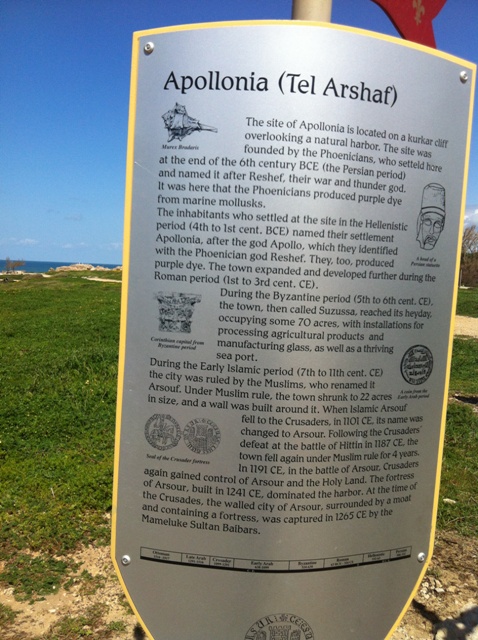 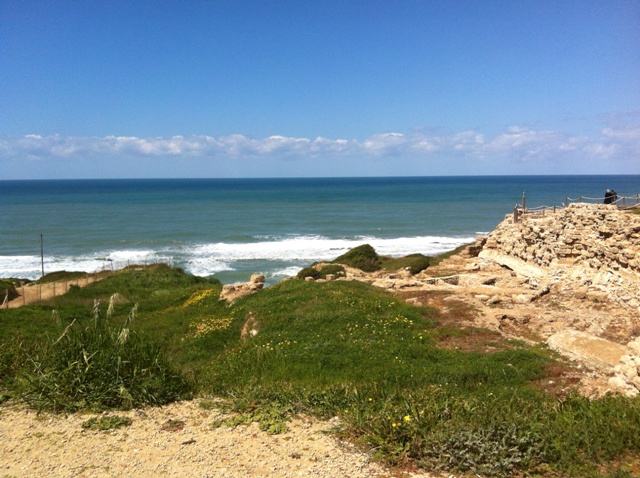 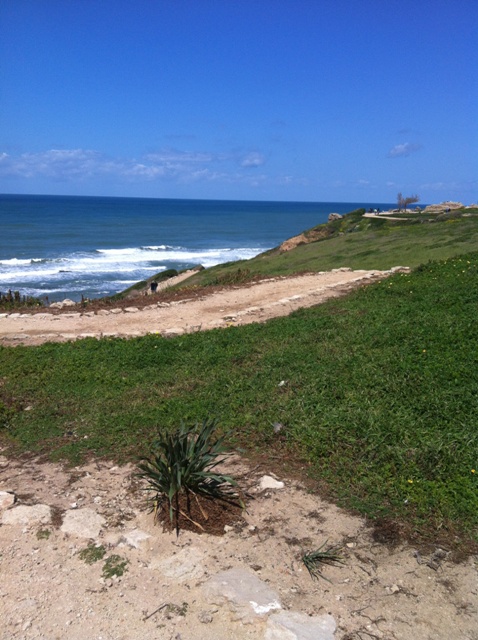 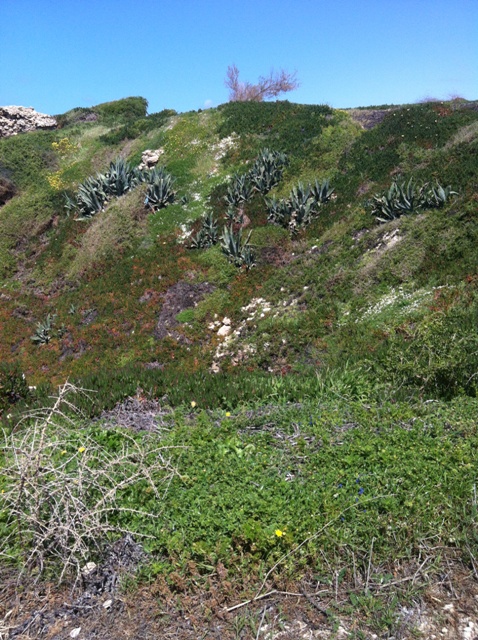 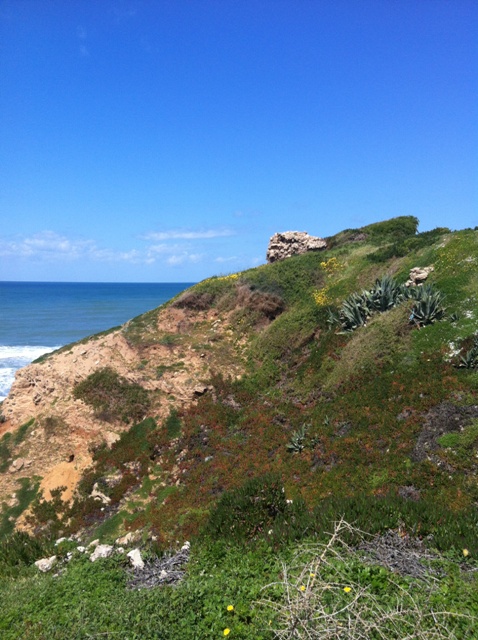 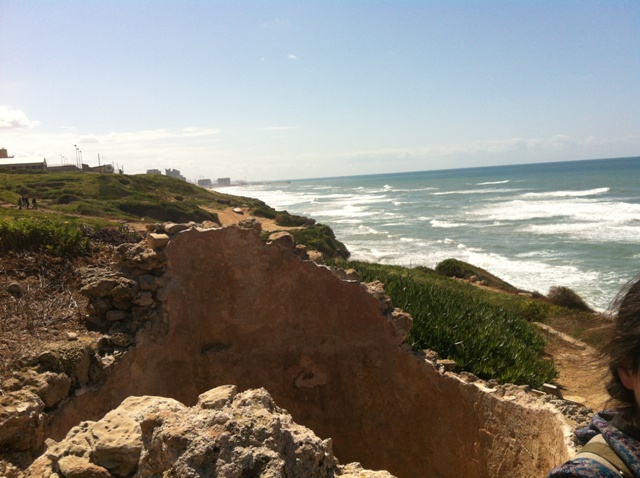 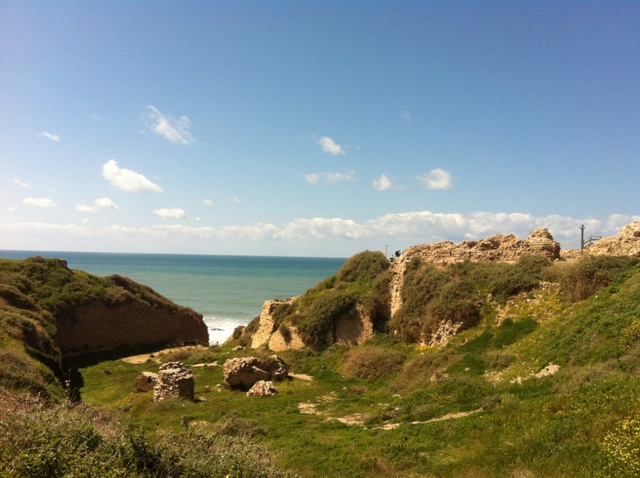 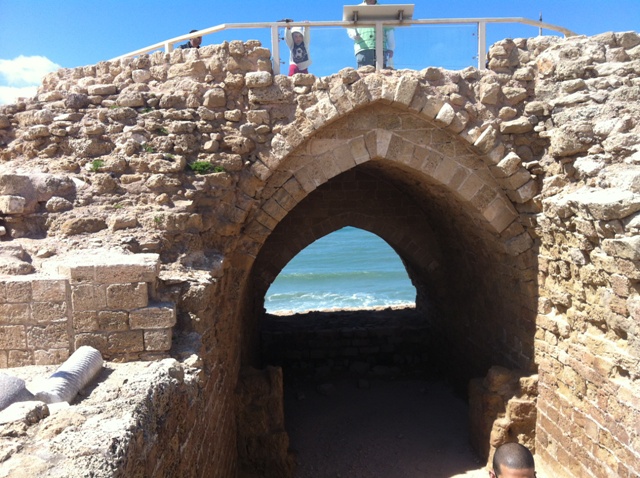 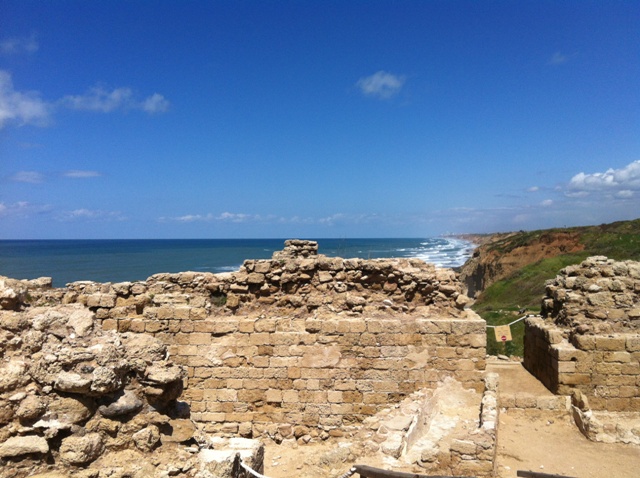 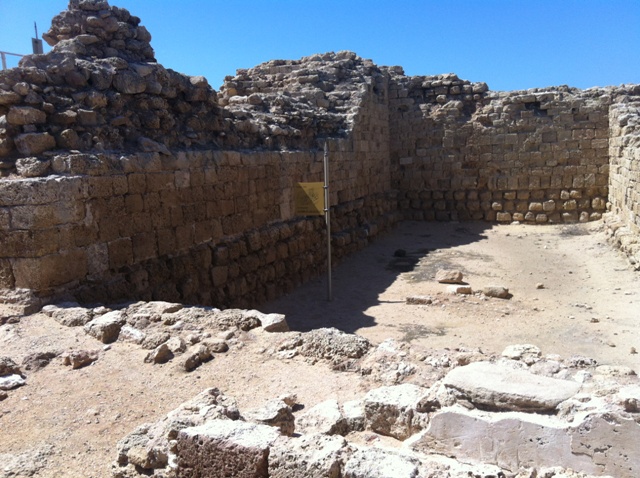 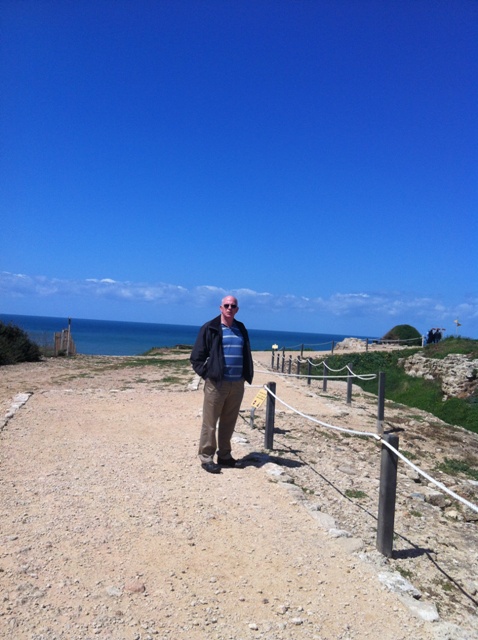 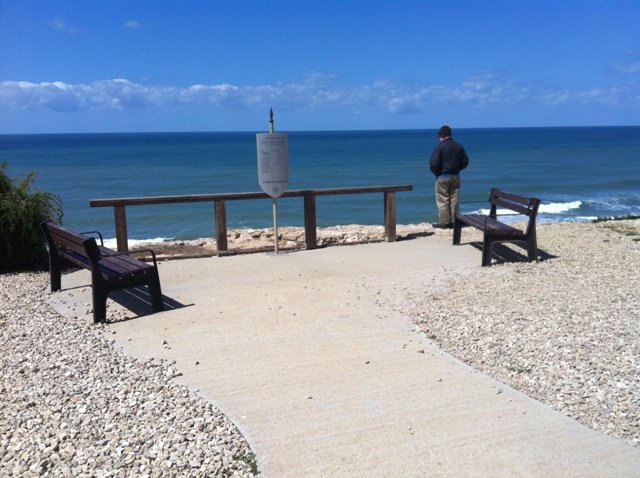 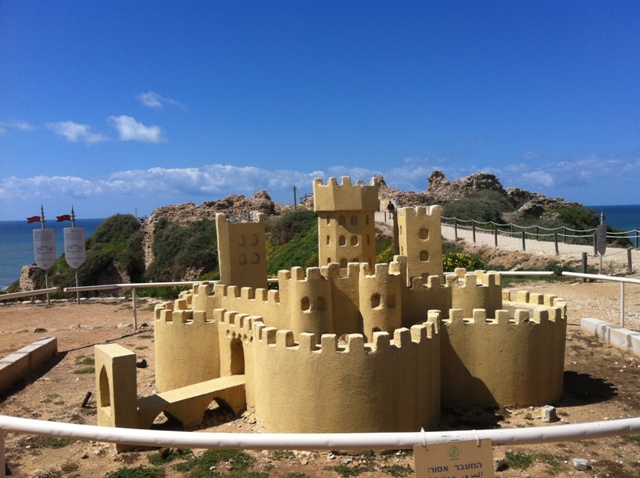