Too good not to repeat. here's a shot of the performance: 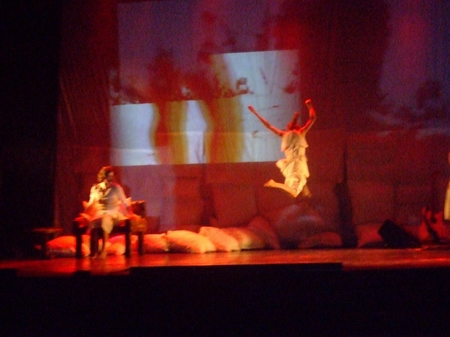 Iris leaping into the video of her at the end of "The Closer you Get,"

and the dress rehearsal. 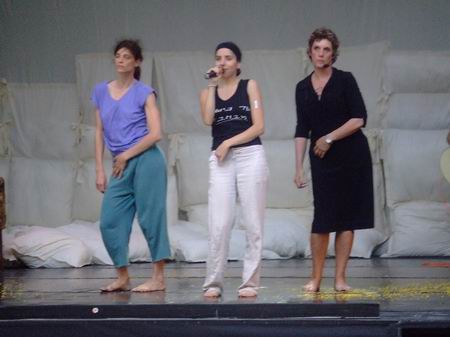 Iris, Yael and Karen become one.

The death of poet Stanley Kunitz, 2 weeks ago, has taken a few weeks to trickle down into my consciousness. My respect for this 100 year old poet first went up when he wrote about Theodore Roethke, but it was his attitude toward his position as poet laureate and poet of NY that totally won me over: "The poet is not in the service of the state," he said of his official post. "On the contrary, he defends the solitary conscience as opposed to the great power structure of the superstate." It's what made him a jewish conscientious objector in WWII, and the stuff that brought up my own dilemmas in the post-war academic-poetic community. How can art be above politics if politics is threatening to destroy art?

Samech Zuoabi's award-winning film, "Be Silent," is being shown tonight at the cinemateque and i am too sick and tired to go. Please try to catch it for me. I will be very sorry to miss it! And he, as a filmaker, deserves all the attention he gets.

The strange boycott of CUPE I reported last week, is only now eliciting a response. To response, press here.

Sayyed Kashua always manages to bury some truth I hadn't paid attention to before in his little columns. This week, for example, he mentions the fact that he is asked for his identity card upon entering a mall because his daughter answers the guard in Arabic. "Hamdilllah, Praise God," she says, and turns herself into a suspicious character. This week I read the Hebrew before the English and discovered that there was another truth apparent in the story. Kashua writes about "Ascension Day," a Christian holiday that he does not quite understand, because after all he's Moslem. And his ignorance of the holiday allows him to make up significances to suit his humorous conveniences. Anyway Ascension Day was translated into English as "aliyah day" or the day of immigration to israel, proving the translator knew much less about Christianity and Islam.

I could have sworn I wrote more yesterday. But it's all gone.

For Ezi's birthday we did dinner at Derby Bar - where the food remains surprisingly tasty. We were probably the youngest people there - It's as if only old people know about this place, but what old people. I recognized a whole bunch of ancient celebrities, but they have good taste - because the fish is amazing.

It was a good conclusion to a tough day - which was made much more difficult by the heat wave. The electric company has been doing little outages too, just to control the heavy load, so lots of people got stuck in elevators and uncomfortable places in the middle of the day. For me it wouldn't have mattered because I taught in a room where the airconditioner had no effect on the temperature, and the only way to go on with a class was not to move.

So everyone is still complaining about the electricity outs yesterday and the day before (except the people who work at the electric company - who for some reason didn't have any problems in their neighborhoods) and of course no one is talking about the fact that we have become totally electrically dependent. Take my office for example. It was built by a european architect - for maximum sun and minimum wind. One wall catches the afternoon sun - so for 4 hours in the summer we have a great view, but constant and direct heat - and almost no windows that can be opened. This means the building must always be airconditioned. Had it been built in the Israel version of the bauhaus style, airconditioning would only be needed as supplementary. Most of the classrooms i teach in also have few or no windows and no natural source of air. So artificial lighting and air is necessary - and that costs.

At last, proof of my immortality in the Hindustani Times.

Did I forget to mention I was in a poetry reading tonight? It was part of the poetry festival of hertzlia - it was great and the beginning of an annual tradition. But what I really want to talk about is Shmuel Shatal, a 93 year old poet working on his latest book. He didn't participate but we drove him there and back and were regaled with some really great stories. When I started to tell him about the festival in Maghrar, he compared it with the one ten years ago which was held in the caves for which Maghrar was named (Meorot). In fact he knew much more about Maghrar than I ever did from being there the last two years - like the fact that they are major exporters of olive oil - and then apologized for the forgetfulness of old age...

One of the official stars of the evening was Rivka Basman. Although her Hebrew is perfect she writes in Yiddish. I'll post some pictures later, but here's a poem in the mean time:

Did you see
How the tree has grown old?
Its crown has let down grey grey locks.
The young pine
Has ceased its laughing

And we too -
Are also involved
In all this.

I was also pleased by Farouk Mouassi. More of him tomorrow.