another day another spike. We're back in terrified mode again. And what's worse everything we knew about Democracy is crumbling before our very eyes. Protesters against corruption in government arrested and protests against their arrests corraled. Dystopia is beginning to look good to us. And we are homebound again.

but we did take a drive and saw some grandchildren from their apartment balcony through the roof of our car. This was a particularly dangerous activity for us because noone was wearing masks on the street. 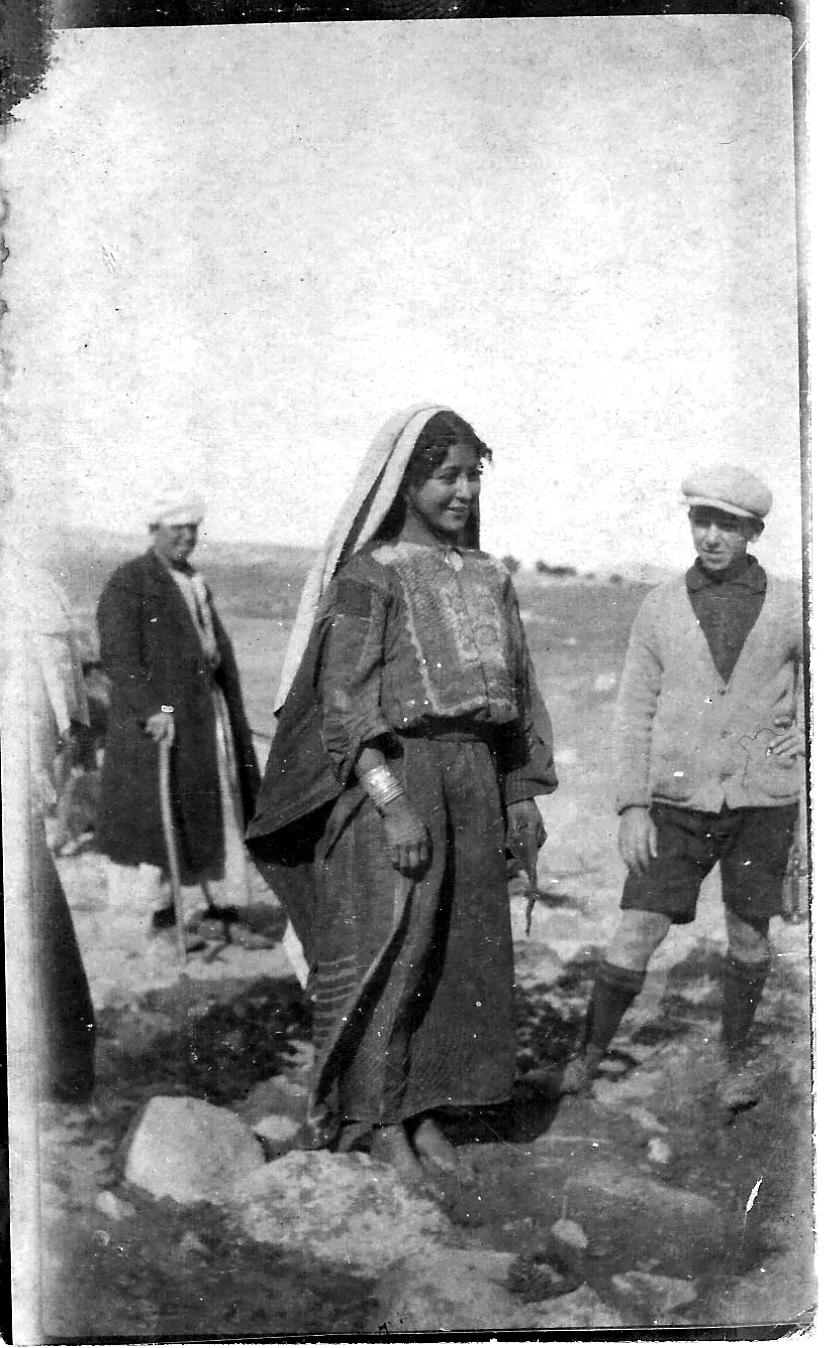 The negative of this photograph fell out of an old album of Ezi's mother. It was taken in 1925 by Ezi's father, I assume, and given to his mother. I find the relationship of the three people quite remarkable. The contrast between the smiling Arab - the Fellach, the awkward new immigrant, and the beautiful girl is amazing. Who are these wonderful people?

I'd write more but i am in the throes of "Teheran" - i understand it is on Apple tv or it will be soon - but right now it is in Persian, and I am reading the Hebrew Subtitles.

If I had gone into politics i would have probably been crushed by Bibi. I would never be able to get out of the mindset that human beings are not capable of inhuman behavior. i'm sure that Ganz got himself into this mess because he believed that honesty and fairness would win, and now if we get rid of Bibi we're going to get one of the stupid lackeys of his - like Miri Regev. Well, maybe something good will happen.

Like with me - i waited 4 months to go to my hairdresser, and when he saw me today he said he was going to change the mess i made. i'd really been looking forward to it - because all the antibiotics had done some serious damage to my hair.

Well, now i am a redhead.

And the texture is straw. so i look a little like a scarecrow.

We have been getting a lot of vegetables off of trucks lately. We get a whatsapp that a truck with cherries will be in the parking lot on this and this street, and when we get there it is almost impossible to recognize until we go around the back and then we see bins of fruit and vegetable inside some rickety wagon. This time we filled the trunk of our car with our black market goodies and then we suddenly decided to go down to the beach. and what do you know, the outdoor restaurant we love to visit was open and not crowded. we found ourselves seated at a table with two beers in front of us, and realized we need something to eat along with the beer.... and then a friend stopped by... and then we realized it was time to go home and go to bed. And throughout that entire evening I forgot about Gantz and my red hair.

Gantz reminds me of my father. - a man with ideals and a belief in the good-heartedness of every creature. he was proven more right about animals than humans.

We're getting worse and worse - the most number of people diagnosed with Corona since the beginning. Yes, we're testing more, but we're also running around without masks, or masks on their chins so they won't get fined. Even we old people are venturing out onto the lawless streets - after all, some things can't be put off indefinitely. Today, for instance, we went to the bank to do some things that cannot be done online. it was a real adventure: we had an appointment to one of the few branches allowing customers, took a digital number and were asked to wait until the previous customer had left, and then were called in. it turned out that the woman taking care of us was a junior teller in the bank i used to go to 40 years ago (before that branch closed) and we remembered each other through the plexiglass. she had to call our branch to approve the transaction and got the teller i've known for 30 years - who sent regards. and we all reminisced. the contrast was amazing - between the totally impersonal system right now and our memories of the past banking - when the bank manager would come out of his office to greet me and we would all trade jokes.

If you want to see Teheran with Hebrew subtitles, you can find it: on this site

I've been obsessed by this photo i showed you yesterday. i'll tell you more about it later. this is just a little thought i had about what she was thinking.

All I know
Is that this blond man
Is paying me
Special attention
All I know
Is that he knows
I am lovely
the And wants to keep
My memory
Forever.
My father
Is proud of me.
And the Foreigner
Doesn't get
Any of it.

So we're going back into hiding - well partially. And it's okay by me. if it helps. we're going down the economic drain in the meantime, and if people start following the rules, and the pandemic subsides, we'll be able to start again. i'm sure of it. in the meantime i don't get why we're not employing some of the people who were let got to enforce the rules of social distance. and why we aren't employing some of the entertainers who have no audience right now to do TV shows less boring than the endless cooking programs. My neighbor and friend who is a registered travel guide has been digging around for work for four months, and he would be wonderful organizing those mask-police. it kills me. (By the way if you need a driver to take you to treatments, errands, etc. he can give receipts.)