Sorry guys when I sat down to write last night, I realized I had caught the flu. i was in denial all day, but accepted my fate at 10:00 p.m. and went to sleep instead of writing out my opinions of Boaz Yonah, the businessman who cheated so many people out of their homes, and the concept of social responsibility. I wanted to plead for education from grammar school on civics, or the reinstitution of the scout tradition. To return ethics to the center of society.

But that's another story. I also wanted to write about the ayurveda massage i got from Hank in the Villa Galilee. Some people say that before you do a massage like that the masseur asks you all kinds of health questions to determine that kind of oils and stuff. But I had the feeling that Hank was just asking my body about its history and my body kvetched to his hands. "Oy, you wouldn't believe what I've been put through lately!" my body said, and Hank's hands said, "Shanti shanti shanti" and they seemed to understand each other."Oy.""Shanti."Oy.""Shanti."Oy.""Shanti."

Just a few hours before this dialogue, we were driving up north, having begun mid-morning. The Ostrikers came to us directly from the airport and we began our trip at once. So about half way there we became very hungry. I remembered from previous trips that we often get desperate for food around Afula, desperate even for McDonalds. Once I heard there was a great restaurant in that neighborhood, but could never remember the name or where it was. Even the person who told me about it couldn't remember how to get there. And so, as I drove past Afula, I was beginning to believe we would be repeating the old nightmare, when I suddenly saw the sign, "Sahara," and spun the wheels to the right. It's just past a gas station so the sign is hard to see, but once you get there, it is a palace. 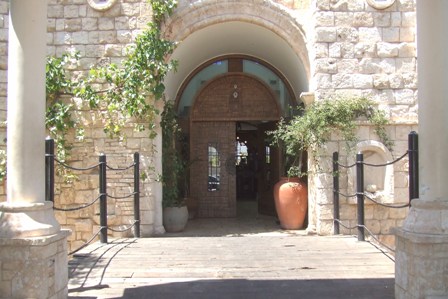 You can call Chaled at 0547909505 for directions. Alicia took our picture so you can see the food even if you can't see the top of our heads.. 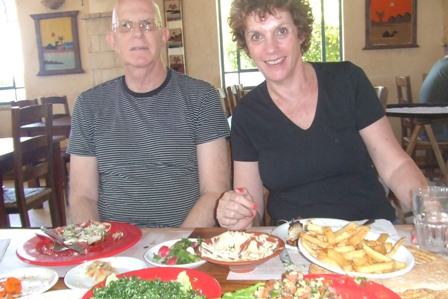 Takes Ezi a while but he's now made some of his pictures of Rosh Pina and Zephat accessible. Rosh Pina: 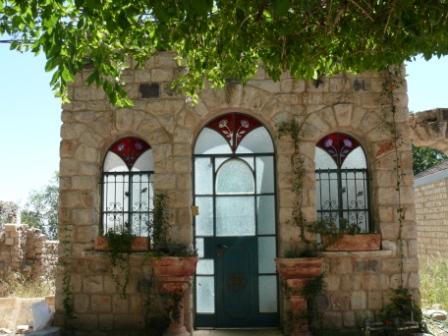 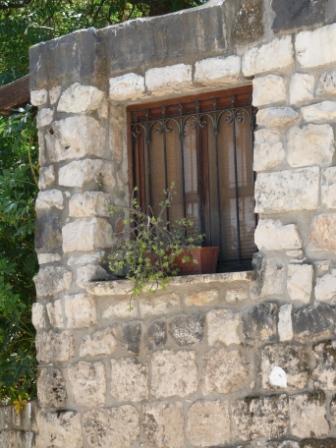 The religious girls of Safed impressed us with their dresses. There were three who were typical - clearly modest, but fun-filled as well. 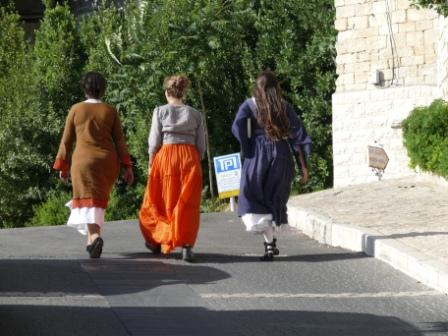 We also had the chance to visit Naim Araidi in Maghrar. On the way over Ezi asked me to call and remind us exactly where he lived so we could put the address on our GPS. Naim just laughed on the phone. "This is Maghrar! There are no names for streets! You can't find Naim's house on the GPS" 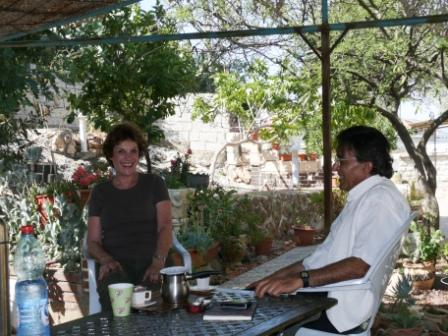 I can't seem to find the more scenic photographs I'm sure we took. You'll have to ge there yourselves.

It would have taken a lot to keep me from going to the wedding in Jerusalem. I knew it would be hard to go there without Ezi but I was determined. I hate the ride to Jerusalem but I love the citadel and the people getting married.

But I couldn't make it. I collapsed.

Incidentally, my mattress got replaced yesterday, while i was away teaching. I came home and fell on the bed, and it was worse than before. To wake up every morning feeling like a pinata! Oy! I began to krecsh. I'll never make it through the night. Ezi switched our matresses and I fell asleep like a baby. This morning both of us are happy. Now all they have to fix is the creaking sound it makes when it sits up, and i'll be contented watching the demeaning prisoner exchange we're making, the Gaza ceasefire, the whole thing. All you really need is a soft matress in this country for when you collapse.

"Part of the secret of success in life is to eat what you like and let the food fight it out inside." wrote Mark Twain. We are planning a marathon of eating in the next weeks that all the grandchildren are visiting. From restaurant to restaurant. Watch these pages for reviews.

Ezi has come up with an amazing idea for a musical on the issue of immigration and israeli guilt. It's called 'slach li she baati." or excuse me for coming. The title is also a pun on "Salach Shabbati," the classic comic Israeli film on the immigration of Jews from Yemen.

All I've got so far is the opening scene which involves a typical tel aviv resident - young, gay, etc, - picking up an Arab guy from Jaffa and getting into a discussion about politics in the night club bathroom, and the finale when everyone is on the beach singing and barbecuing steaks.

This is Ezi photographing the doors from the picture above. 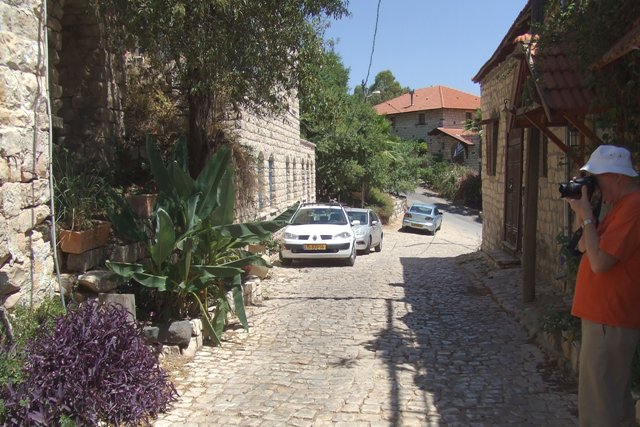 It took a year, but I finally saw Noodle. Don't wait that long. I hear it's playing in all kinds of film festivals this summer in the U.S.