"Little children have fallen asleep on their own - the big ones still need to be cradled." I got a little glimpse of the Yiddish Institute tonight at a dinner for the foreign participants. We'd spent the evening at a family event, so I missed the dinner part and most of the sing along. But I did get to the last half hour, and it was really an emotional experience. For me, the songs were nostalgic, reminding me of things I hadn't sung for 50 years. For the students, many of whom had just learned the songs, it was a new kind of nostaglia.

This is the first year of the Yiddish Institute at the university, and already it looks like a long term tradition. There doesn't seem to be a website for it yet - but this will give you a bit of information.

If we could only import the air of Haifa to Tel Aviv, our lives would be much improved. We walked through the Bahai Gardens (in installments so someone could stay in the car with Shusha), enthused over the view from the Panorama, and had lunch in Habank on the Carmel. It was like we were on vacation from the terrible events of the recent past. "Haifa is another country," Gabriel Moked once told me - more than twenty years ago, when we were picking poems to read at an event in Tel Aviv and then in Haifa. It's a different audience, a different mentality. I'll post some pictures later on tonight and leave a space here for them. 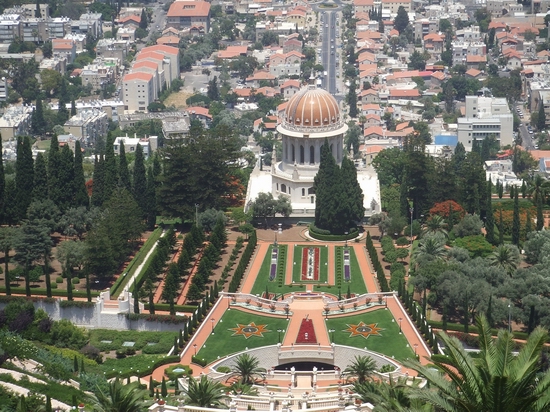 By contrast, I don't think i took a single photograph of nachalat binyamin yesterday, even though it was noisy and colorful and full of great 'characters,' and the same children and grandchildren i photographed ceaselessly in Haifa. Maybe we were too busy with what was going on to look at things photographically. And the whole world was there. The same doctor who had performed a vein operation on me the night before was wandering around with some of his children, staring absently at clowns. I caught a colleague of mine evaluating the wind chimes for sale, and pulled him over to the cafe where we were having lunch to say hello to everyone. And I even met Lynne from Australia who recognized me from these pages!

We went by the house that Ezi spent the first four years of his life on Nachalat Binyamin and a thousand other places of personal historical value.

In fact, we only remembered to take pictures when we hit the parking lot. High above the world, it shows the mess of the buildings and the order of the sea that's always right there: 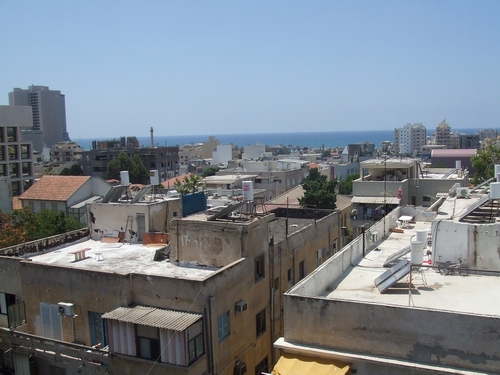 Don't forget the Monday afternoon poetry reading by the writers who participated in arc this time. Webb 01 at 4:30 at Tel Aviv University. I may even read.

My recent penchant for playing musical hairdressers has led me to many strange and new places - and many varied haircuts. The biggest surprise was today - in the past six months I've tried three stylists - prices varied from 200 to 1200 shekel for about the same thing and the cheapest - today - was the best.

The Barber looked over my shoulder as I read Barbara Mann's book about Tel Aviv and asked me questions. "Where was this 'casino?'" "On the beach at Bograshov," I tell him. "And what were the stakes?" "It was just a cafe," I said. And the naivete of all of us suddenly came back to me. The people involved in the building of the 'casino' like Ezi's grandfather, who was the engineer, knew very well about gambling and about the fleshpots of Europe, and had come to the sleepy town of tel aviv to help build it.

Well not exactly for that reason. After he'd walked back to Budapest from tashdekidtan where he'd been prisoner of war in WWI, he built the pool at te Hotel Gellert and some public institutions, and then didn't get invited to the openings (of the public institutions) because he was a jew. So he decided to build another city. There's a piece about him in Hebrew here.

. and here's a little picture along with a hebrew history.

Our President is getting into hot water. We've had a few public figures in recent years accused of sexual misconduct and harassment. And each time a broad smile comes involuntarily to my lips. If only I could remember the number of desks I ran around - in job interviews, in publishing offers, even in shops! Far too many to remember singly. And I have no idea whether it would have mattered if I had accepted the attention as the compliment it was offered. But I came from too conservative a background to play that game, and never received the positions that were hinted at. At the time I assumed it was my problem alone - that i sent off signals that were culturally dissonent - that my understanding of the proper behavior was faulty - that i would have to come with far better criteria to be taken seriously. Years later i realized i was a victim. But it is those very people - people who would now be 70 - who are now being accused of this kind of behavior. What was normative for them then is now perverted. At last.

Between physiotherapists and orthopedists i haven't had much time for anything, but this afternoon i made a date with a friend to come over. She's been stuck in traffic for over an hour and keeps calling me to ask: if everybody is abroad then why is highway so crowded. I can't figure it out, but i didn't go to a concert tonight so as not to miss her, so i'm feeling a bit frustrated. A strong need to go out has overtaken me.

No I'm not celebrating the potential demise of the President. I'm actually terrified that he will be replaced by some religious fanatic, and this will not improve our situation. Nevertheless there is some amazing relief in the fact that sexual harassment is now recognized for what it is. it has nothing to do with individual guilt.

2 more soldiers. a lot of people around here are longing for Sharon.