What is my obsessive attachment to the five-day page? Aren't blogs supposed to be immediate, immediately accessible, and blogably interchangable? And why am I keeping myself apart by not being an official searchable blog? Well, if i make five-day places i have a future - a future that i control and is controlled. And what i say isn't interchangeable, or automatic.

Al Keida and Hizballah and Israel: Remember the fish tank in the James Bond movie where 2 fish are fighting and the third one waits until both of them are too tired to go on and then moves in? Al Keida is the waiting fish.

and you and me, we're the fish food.

At least twice a day I try to reevaluate the situation - how much in danger are we, how much damage to others do we need to inflict in order to remove the relative danger. Each day the situation is more extreme - more danger, more damage, fewer alternatives.

Yesterday I was trying to find out whatever happened to Wafa Sultan, the woman I spoke of the day before. I realized that the clip i recommended was the same one as four months ago. And the discovered that she was hiding for her life and had disappeared since then. She had spoken out against Islam. I pray that the enthusiasm of all my colleagues and friends haven't contribute to her endangerment and her situation has eased.

A few friends of mine who are entertainers have been 'touring' up north, traveling from shelter to shelter where hundreds of thousands of people are now living, hiding from rockets, terrified of missiles. They've been performing - to try to raise the spirits of these people. The cellular phone company has a bus for them, which also has a lab in it to fix people's cellphones on the way. You can imagine how important a cellphone is right now. You can imagine how important lifting spirits is right now.

The interesting - aesthetic - challenge as I see it now - in these entertainers and their lyrics - is the fact that for years we have all been suspicious, cynical, questioning, of a simplistic patriotism. And now, it seems, we have these all time hits with out-of-date words. This isn't a time to question, to mock, to argue.

A good friend of mine who left Israel a few years ago in protest (she believes in a one-state solution), got me in a spin yesterday when she asked me what I am doing to stop the war. Am I protesting? No, I say. then i think about it. I only protest one fact - that we are not organizing as citizens of the world to promote dialogue. The internet is free. Why can't we get together on this? There is enough chat going on between lebanese and israelis. let's chat toward a goal - how do we get out of this situation.

No body to talk to.

I did something just now I haven't done before on these pages - i erased. I had written some critical things about Nasrallah, and indeed i have cause to be a bit angry, but if I become like him in any way he will have conquered me. So I continue to urge the few of my friends who have remained with me not to learn hatred and anger.

And pass the ammunition.

I know it was inevitable. I know that if you put rocket launchers and citizens together people are going to be killed. I know these people should have gotten out, and should have been helped to leave by the Hizballah. But it is nevertheless a terrible tragedy. Dozens of people - and no means of saving them. It is too much. It does no good to say that the people like the UN representatives knew that they were endangered by the Hizballah's shooting off rockets from their windows. They might have known and they probably couldn't have done anything about it.

"Oh, you can have the television news on," my cleaner said today, "I just don't listen. ...It scares me. The last time we hit Kfar Canna (was it 93?) my cleaner - who has long passed away - said the same thing. She also said that during the Gulf War.

We're experts in post-trauma, my therapist daughter says - only we never get to the post part.

Margot Singer, who teaches at Dennison in Ohio, sent me this letter:I saw your post about Wafa Sultan, and it just happens that my parents had just been to hear her talk in Boston (I've attached an excerpt from my mother's summary) this very week. They (my mom a liberal American; my father grew up in Haifa in the 40s) were very impressed. Anyway, I thought I'd let you know." The depths of relief I felt to know that she's okay was surprising to me, and I am very grateful to Margot for this!

There have been at least three major terror attacks in the past 2 weeks - attempts to blow up places within the country, and with the threat of attack from the sky and from the street, it isn't easy to avoid agarophobia. The tragedy in Seattle, the chance anti-semitic explosion of Mel Gibson, the anger in today's parliament, all the details in the papers seem to come together to close in on terrifying dichonomic world. I want to shout - don't line up!It's never the good guys against the bad! But who's going to hear me from under the covers?

Here's a cafe in Haifa taken just before the bombing began: 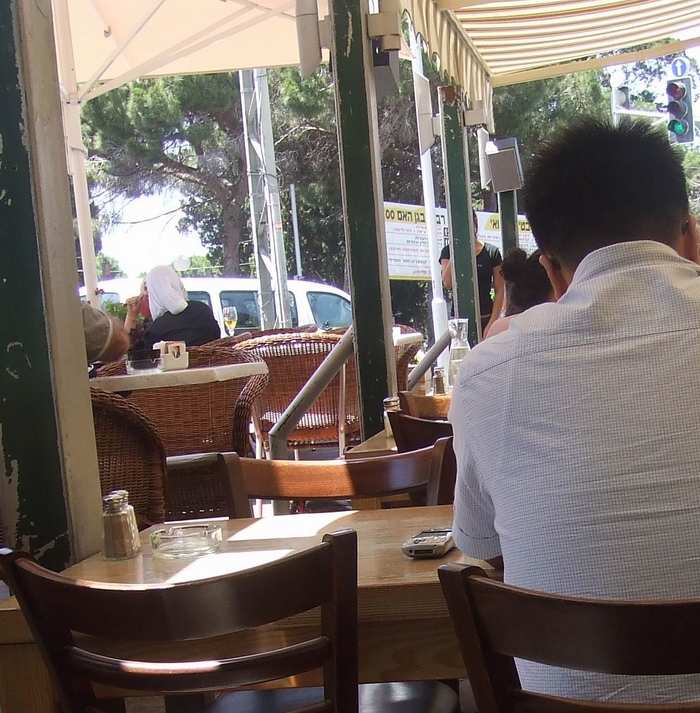 Notice Arab and Jew enjoying the quiet. Nothing is ever black and white.

Time to go out and take a terrorist chance. We are going to celebrate our anniversary belatedly with a drink. Anyway my book is progressing in reverse.

What does the intelligensia say? It is assumed everywhere that academia and intelligensia are left - radical and against war. This is usually the case here, but not this time. When I got a few strident emails urging me to pay for an ad in the paper condemnning the war, i deleted them mid-read, without thinking. But it was only when I saw Zohar Shavit on tv talking about those very emails did i recognize the violence of my own response. Despite the terrible tragedies along the way, on both sides, despite my constantly re-examined conscience, despite the economic disasters, i know that we citizens are constantly being targeted because it is our very existence that is meant to be destroyed.

Brigitte Gabrielle is a Lebanese woman who really should be heard .

And since the animals are still in trouble up north, you might want to go to this site and adopt a shell-shocked homeless dog. The Hebrew site has more pictures and more news.