There was an announcement of a humanitarian ceasefire at 2 so I thought it would be okay to go to visit Rivka Basman in the afternoon. But at 2 the rockets were still going off - apparently the Gazan peoples need the time but the military doesn't want to miss a minute. Still I left the kids with grandpa and went.

I wish I had taken more pictures. I remembered every corner of her house, every photograph of her prize ceremonies, every painting of her husband Mula Ben Haim. This one: 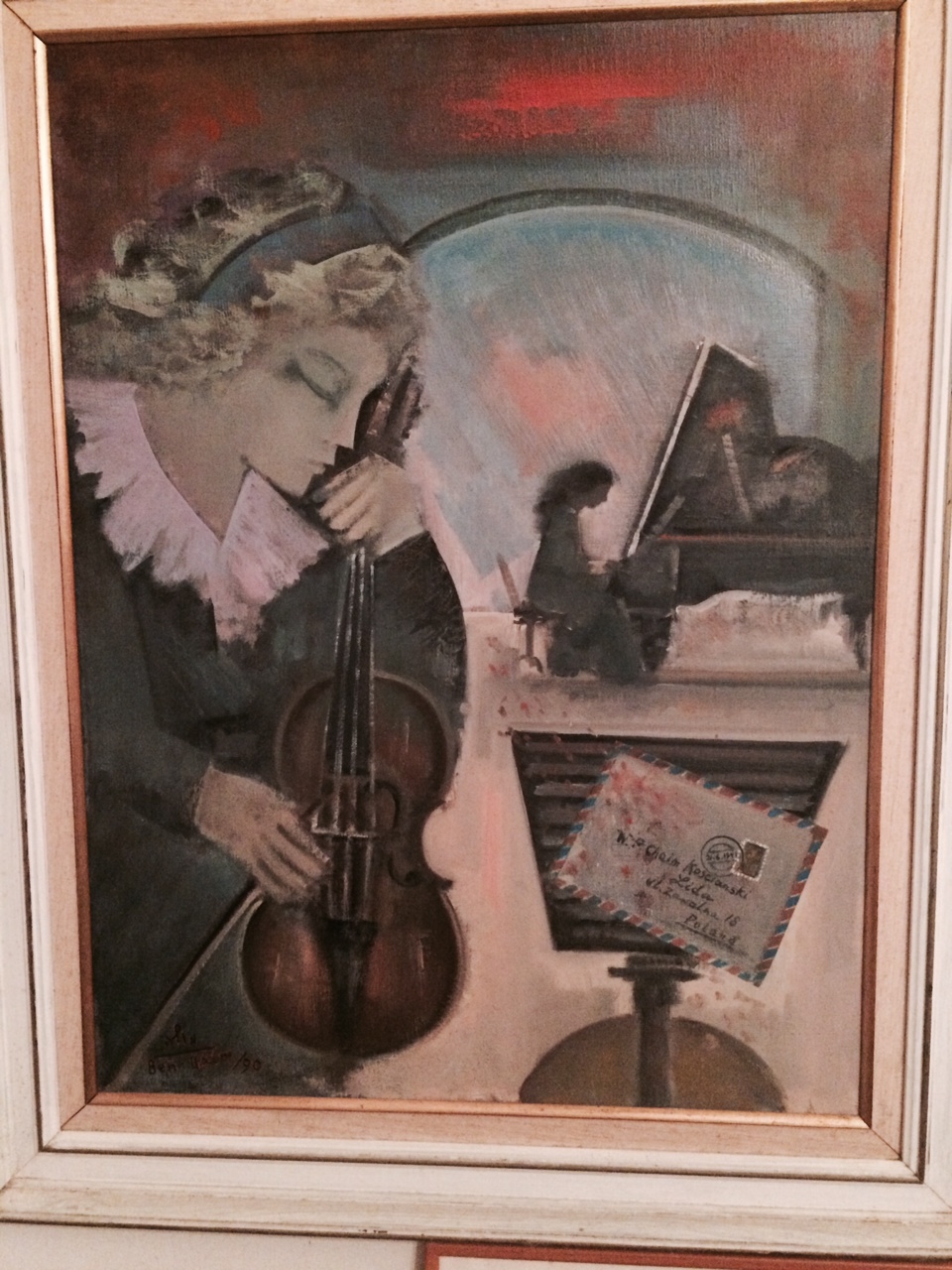 is burned into my memory because there is a letter from Lida, 1939. Not only were my parents from Lida, but my mother used to baby-sit for Mula, who lived across the street. When they were in Israel, they visited Mula, but I only met him when my Sima Kaganovich took me to his studio.

Rivka and I met years later, when we were in the Writers' Federation together. She's now almost ninety and still an amazing poet and she did me the honor of posing by the painting that meant so much to me. 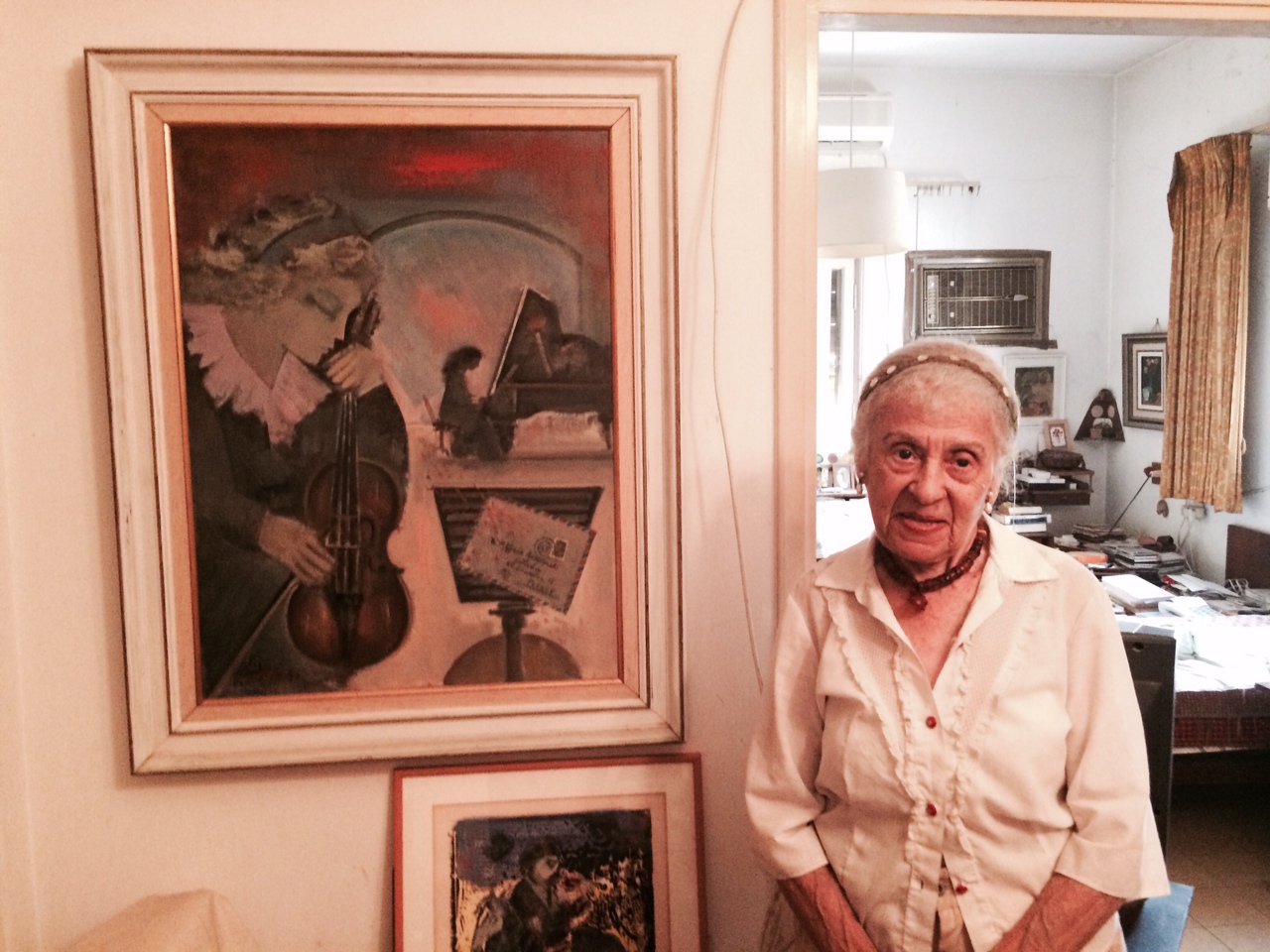 The second thing I asked her about was where she stood in a rocket attack. Her house seemed so fragile, almost as frail as her, but when she showed my the hall, with its concrete bar for a ceiling, I was relieved. Strong like her.

The painting, with its lovely spiritual musicians, reminds me of my aunts who perished there.

For Rivka Yiddish poetry is no less important than her own poems, and she has been active in Beit Leyvick, the organization for Yiddish Writers, for many many years. The number of writers diminish every year, but the need for preserving a culture remains imperative. I dream that one day a new generation of Yiddish writers will emerge, but in order for that to be possible, it is absolutely necessary to encourage and develop this organization. Most supporters of Yiddish are more interested in encouraging research and translation, but for me there is nothing like encouraging writers. Some are less talented then others but you never know when a writer can develop, can blossom, can spearhead a new movement. The chance of survival - even if it is mall - makes it absolutely necessary to support this impoverished home of Yiddish writers.

What about the war, you ask? It's here. What is the Israeli on the street's reaction to the continuance of conflict. Believe me, I weep for every citizen of Gaza who died. I weep more for each soldier, and I see their faces - all of them - in the night all night long. Still, still, when I think of the terrible fates the Hamas has planned for us, I weep even more.

I don't know what today will bring. Yesterday the kids here spoke to me of their reactions to the alarms. The first missile, said one, was so surprising their guests from the U.S. didn't understand the need to move to a safe place. they had to be pushed out of the apartment to the hallway which was safer. The boom was close, they told us, but since then they have learned to escape quickly wherever they are. They told me the stories they had picked up from the news, about opening to tunnels to Israel from Gaza hidden under carpets in children's rooms, with toyboxes filled with grenades. On the other hand I read the journal of Mohammed Suliman in which the children seem so naive and are totally innocent. And yet Tablet magazine implicates children in the building of the mines

We cannot ignore all the children.

One of the hardest things to do - for anyone - is to think like Wittgenstein - I mean to be able to see both sides of a situation at once. To think of the children of Israel and the children of Gaza at the same time. I met a soldier who said that on the first night he entered an apartment in Gaza he was very embarrassed to go into someone else's private space. And then he went into a child's room, with a crib and a bed, a cupboard and a toybox. It was all mined he soon discovered. This guy works in a bank and is suddenly called into reserve duty and he's going through a child's cupboard for wires. The same thing is happening to us all the time. We are disoriented in time and space. We behave similarly almost all the time, while constantly prepared for a missile or shrapnel from a destroyed missile to drop into our lives. We want everything to be quiet and everyone to be happy, but we know that if we stop fighting we will be destroyed. the necessity of holding opposites at once in our hearts is in itself exhausting.

Because I posted something on Facebook and realized it wasn't clear, I'm clarifying again:

Alternative thinking . i mean they are human beings and we are human beings. i mean our hospitals have been havens to many Palestinians (including very well known Palestinian leaders) and yet we are - albeit very reluctantly - having to hurt some of the same people. I mean that a hospital in itself may be a shelter for terrorist leaders in Gaza and a lifesaver at the same time. I mean that we are leading 'normal' lives in Israel, but must be ready at any moment to grab the baby and head for shelter. i mean there are terrorist tunnels just underneath kindergartens, so that even the most gentle and safe place may be explosive. I wasn't thinking of whether Israel has a choice or not, because it doesn't.

Means justifying ends - people have been arguing this to explain the situation on both sides. The parts I have trouble with is 1. what are the ends? what would we do to the Palestinians in Gaza if we won? What would they do to us if we lost? 2. What means can you dream of? building mined houses in a neighborhood that you knew would be bombed first if there was a war? Why were we using a means that endangered citizens? because we ourselves would be under attack? I'm just not finding any way to justify Hamas tactics. And the daily bombing here continues.

Since we've been sick, sleep is complicated for us. So when our daughter called at 11:30 last night from abroad, afraid to return to Israel, it was difficult to return to sleep. I told her that there hadn't been any rockets where she lived for a couple days and her life would return to some kind of normality. After our call I felt deeply the responsibility I had taken upon myself by telling her to return. Eventually I dropped off, but an hour later we were awakened by the sirens warning of an attack. We were slow but raced out into the hall to meet all our neighbors and wait the ten minutes in case of shrapnel after the rocket. After that I was overwhelmed by sciatica pain and spent the night in napping and waking. At 6, I began searching the web to see where else the alarms went off and what we had escaped, in between the searches for a doctor for Ezi. It was one of those nights.

And then an old poem popped into my head, one from "Ignorant Armies"

"One clear loser in the hostage crisis is Israel, which has gone down nine points in the ratings" NBC, June 30, 1985

"There are two ways to cross the river -
a bridge and a boat. The boatman, (B),
for a coin will carry anyone anywhere.
The bridge is free, but from eight at night
until eight A.M. is patrolled by a murderer (M)
who destroys those who try to pass.


"One morning (W) goes to see (L2).
They spend all day in bed.
She is so besotted
she forgets the time, and it is eight.


"When she runs to (B) she sees
she has left her wallet at home
and asks to owe the money.
(B), a businessman,
does not operate on credit.


"Returning to (L2) she asks
for a small loan, but he - reiterating
what he said in the morning - shakes his head.
He has no ties to her, except, as she knows,
an indifferent willingness to acquiesce. Can
she stay the night, she asks. He shakes his head.


"(L1) watches her run down his path, desperate,
hysterical. 'If you love me at all, please
lend me the money for the ride or give me a roof
for the night!' 'Not I - who have watched you two all day -
in love and pain - I will not be further used and wounded.'

"It is bitter cold, and if she sleeps outside
(W) will surely freeze. Perhaps, she thinks, the
murderer will not come out now. She tries
the only way left.
When she gets to this point," You draw an (X)
with your pencil half way across the bridge, "She is killed.


"Now," you say in triumph, "List
the letters in order of responsibility."

That was years ago and I, a young American, newly wed,
wrote down (W), (at least she should know
to take her purse) then (H), (who could not keep
his wife at home with love, understanding, reason,
who did not go to look for her).


The lovers were somewhere in the middle
but he who loved should have wanted
to save her, had an obligation to that love.


The one who didn't care should
have cared for self respect.


The boatman - can you blame a capitalist?


After all, I had been everyone, felt shame
for all of them, except the man on the bridge.


I wrote something about my mother-in-law before:here is the full article about her and my mother.

The playground in Dizengoff Center was crowded today. Mothers and babies who usually play outside stayed in a cooler and safer place. I've become accustomed to the Ramat Aviv mall where the only place for children to play costs money, and it is carefully hidden in a back corner. Dizengoff Center mall, however, seems much more democratic, with all ages and all types of shops and activities. Because I was with Orit, perhaps, the place seemed friendly - shopkeepers familiar and chatty. Even the clothes of the customers are different. Most looked like they were dressed for the back yard, recycled and comfortable.

But you know there is a war going on. You know it every moment.

It just isn't in our character. We complain, mourn, weep, but as soon as there's a moment to relax we fool around. Stopped for a red light tonight and a couple of jugglers came out: 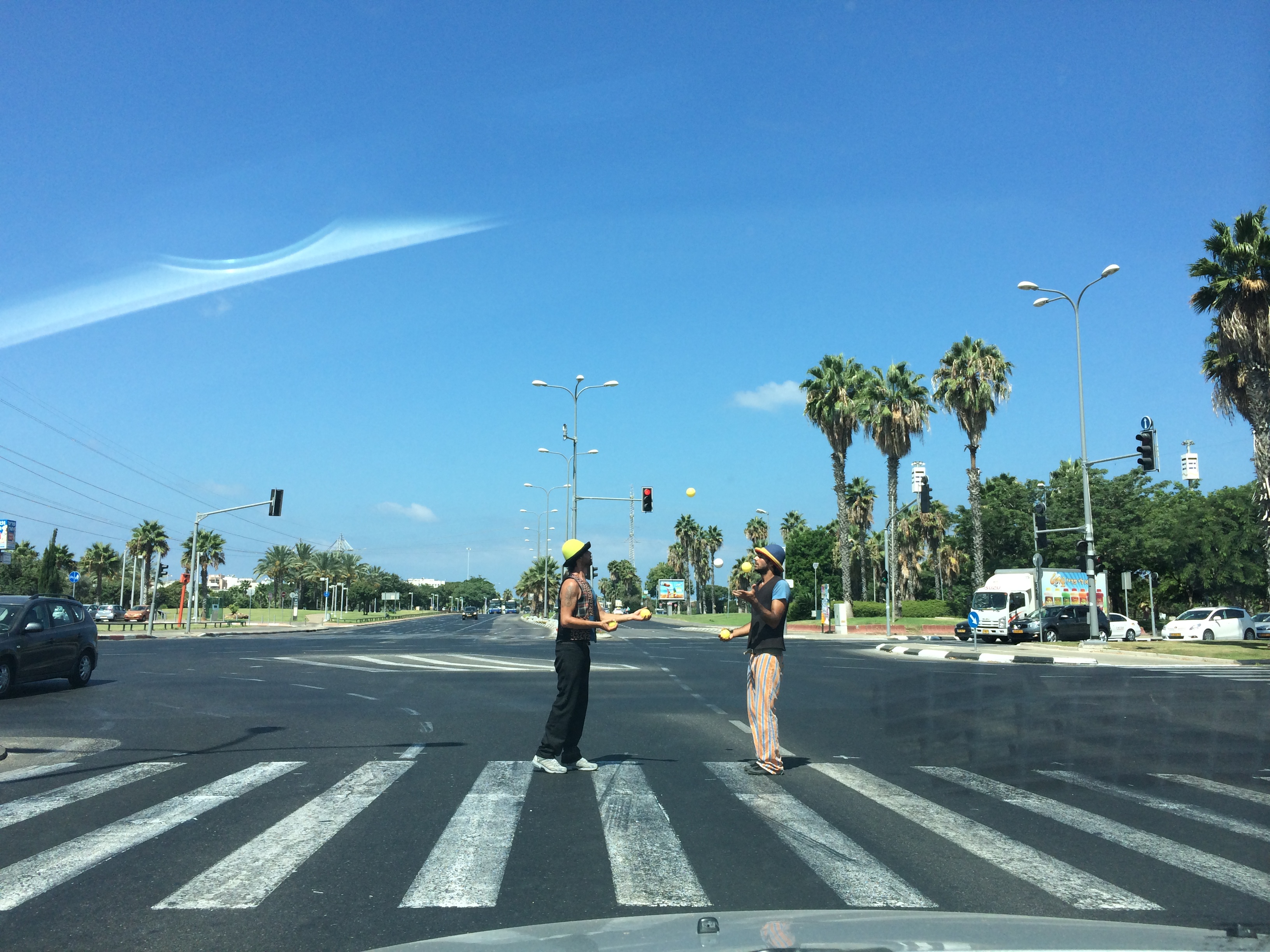 Apropos tunnels, for years we took pictures from Ricky's kitchen window in Metulla of the concrete factory in Lebanon. Here's one from May of 2009: . We always chuckled about what they were building, or digging there. Ezi didn't think the terrain appropriate to an underground tunnel. Probably right, but I'd check out the area anyway.

The orthopedist's office is in this tumbledown strip mall. I had an appointment after the siren and really needed to see him, so i sprayed on some perfume and went. At least that way the dogs would find me. "Where do you go in case of an attack?" I ask him. "Oh, I hide in this drawer here," he says and then tells me in Yiddish to kiss the mezuzah on my way out.

I assume we're in for another barrage late tonight, but I'm really tired, so I'm not going to wait up for it.