We are mourning differently this year. Most of the same people who ignore all public events are still ignoring, but there is a sense of the danger of a third mourning, a sense of the significance of the pull-out, the exile of the settlers, a sense of the self in history this year that seems to have been absent from the general narrative in the past.

Mourning aside, let's get the money owed to the holocaust survivors before they die. Why not sign the petition? Here?

I had a few errands to run today. Despite the union strike, I thought I could get things done. But when I got to the university warehouse they were not working today, and the bookstore kept me waiting for over half an hour while they brought the wrong antivirus program again and again. And I realized the whole thing was too long a walk in the sun when I found myself dripping sweat all over my desk while I tried to read my mail. Then I remembered what the yekes used to say. In loose translation it is: "in July and August - only if you must."

My retail experience was not too great either. Last month I bought a pair of pants from an Israeli chain named "Mausner." Generally I like their line even though it is a bit dumpy and the salesgirls have a tendency to pinch the material in the back and then say, "See, it fits you perfectly." They do alterations overnight and their clothes fit okay. So I was surprised when my new trousers started to grow on me the very first time I wore them. They just got bigger and bigger until by the end of the evening they were no longer svelt but baggy. So I took them back. "Yes, they're too big," the salesgirl said, "we'll take them in." I wasn't feeling very confrontational so I just let them stick their pins in. "We'll call you." That was last week. Today when I came in they were indignant - "you haven't been called." To keep the visit from being a total waste I tried on a jacket that made me look like a grandmother whose daughter shops for her because she can't get out of the Home. "Perfect!" They crooned. "And what a bargain." They will see me once more - to pick up the trousers. i really don't like having to stir up a fuss, but I don't like being screwed. So I only buy where I trust the people who serve me. Or at least respect their deviance.

The Jordan-Egyptian delegation who came out today to talk to us about peace - i hope they do better than i do in a dress shop.

Today is our 27th anniversary of our first wedding to our second partners. We are celebrating by going offline for two days - i think - and will be back with many adventures soon. It is a particularly great time because - not only is the strike over for the time being, but the weather where we're going is great. And, as Oren pointed out, it is quiet on the militry front - too quiet.

So we went up to the Golan to see what's going on. I'll have details and pictures soon.

Hate to write about what I'm seeing up here without showing the pictures we're taking. But you can get an idea about things. Take for example the Villa Galilee, which looks exactly like its website. Our room is here and the dinner we had last night in the restaurant was as superb as anything I've eaten from Escoffier. But of course the website is not the whole story. It emphasizes the Provencal look and feel. But I had a message called Ayorveda that made me recall every word of the Bhaggavad-Gita. And coming as I had from my favorite spiritual place in the world, Ka'alat Nimrod, I was ready for it. More on Ka'alat Nimrod later.

My point about the Villa Galilee is that it is not just Provencal - it kind of transcends both the Provencal locality and its geographical one by the openness of this neighborhood to all kinds of influences. The Jewish religious influence is the strongest, but if you go to nearby Rosh Pina, for example, there are signs for Jewish Feng Shui, a bar-restaurant named Renne's, some pretty knowledgable wine shops, etc. etc. A mix that really cannot occur any where but up there.

I can't go up north without visiting the northernmost town, Metulla, not only because I have a college friend up there, at the last house in town, but because I feel like I've got to visit all of Israel at least once a year, like I'm swimming and have to touch the north and south ends of the pool.

I've picked a few pictures of Nimrod's Castle, all taken by Ezi.

This is the approach

This is one of the first gates 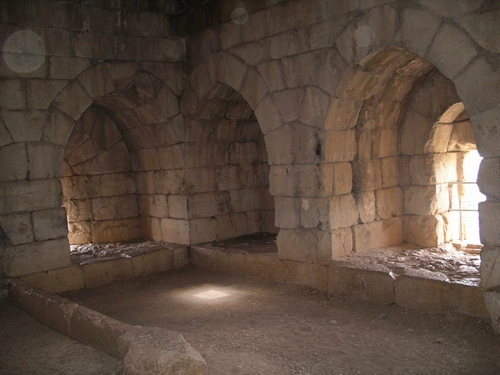 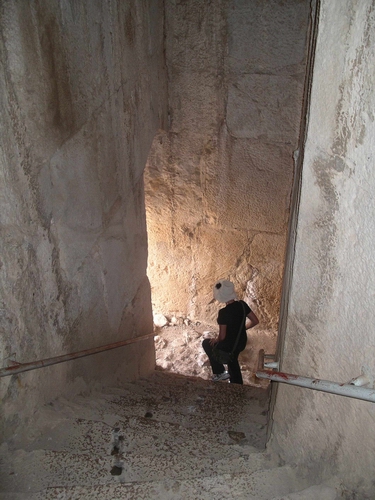