Last night there was an antiwar demonstration - 2500 people - in Rabin Square. I wasn't there.

But I'm getting there - surgical strikes are impossible where there is a civilian population. And although the thousands of rockets falling on us are aimed at a civilian population (me) I cannot justify our own. Didn't we say last week it's time to negotiate? Of course 'negotiate' means 2 sides.

Who do we negotiate with? Lebanon? Syria? Iran? Hizballah?

And while we are thinking about that, I've got friends with targets painted on their t-shirts- one woman in an advanced stage of cancer, for example, who can't really leave her house even if a rocket falls on it. What do we do with all the old people in our building who can barely make it down the stairs in the best of times? And why are these people targets anyway? Do we have fighters hiding in our laundry room? Are these smart bombs that are meant to kill only the bad guys? Then what about my musician friend who has fortunately made it through a terrorist attack in a bus station and still can't get his head together and is now falling apart with fear?

My life has been so self-involved I haven't even read up on the most blogged war in the history of humanity. But there was a Lebanese woman's blog on the tv tonight and I decided to find out more. I started with Lisa's blog round-up.

Greetings from Nona cafe where I am entertaining my ex-mother-in-law, a Haifa refugee, who has just admitted to being 90. She lives in the center -you might have seen her place next to the post office that blew up. She is pretty cool about the whole thing - actually we spend our three hours talking about all the other wars we have shared and some we haven't.

There were actually a number of Haifa people in the cafe - one guy told me he's only here for the day and will be back home tonight. A simple, straightfoward man, he wants to stay in the place he was born.

In the mean time, in case you can't read hebrew and don't understand the instructions, here are some of the rules for Tel Aviv residents for rocket attack:

If you hear the sirens, go for shelter immediately. Don't stop for a quick espresso or an almond croissant.

If you have daughters this is the time to hide them - we may get a consolation call from the president.

If a rocket falls on your neighbor's car, grab the parking spot.

Don't forget to stock up in the shelter on take-out menus.

None of this is a sign of light-heartedness. We are trying to avoid the fact that we are all sitting ducks. By the way, if someone tries to tell you that Nasrallah doesn't want to hurt civilians, take a look at some of the stuff they are throwing at us - pretty scarey damaging material. Anti-personnel bombs with tens of thousands of exploding shrapnel that explode for kilometers around the rocket. In to people's homes - and not people who have been housing rocket-launchers.

Hundreds of thousands of people here continue their refugee status. We try to make light of it, put them up with relatives, ignore that old, the indigent, the autistic, the crippled, and the simply confused who have been sitting in shelters under the constant fire for weeks.

But as the rockets get bigger, create more and more damage, damages miles and miles of forests, shut down businesses up north so that they'll take years to recover, it gets harder.

In partial recognition of this fact, the media is trying to play down the whole thing, interrupting regular programs as little as possible. We haven't even declared an emergency situation - so the people losing their wages and their businesses are not going to get reimbursed for those days and weeks in the shelter shivering and shaking.

I spent a morning today at a bank where some mistake had been made - it should have takenfive minutes but the teller was so incompetent it took hours. And as I waited, I began hearing all kinds of strange stories about mistakes on accounts - some self correcting, some complicated and unhappy. And as the circle of incompetence widened I realized it was a national problem, a real difficulty in coping. We're just pretending.

At least we have roads to escape

Amazing how quickly we start blaming ourselves - we're not handling this right, we're not conducting a clean enough operation, our guys should have been more informed, we're not suffering enough. A stranger wouldn't believe how we complain about ourselves.

I keep thinking about that young girl in Maghrar who was killed today sitting in her living room with her family during an attack. How often have I sat in a living room in Maghrar. By what amazingly universally unjust laws was she murdered?

And while you're at it, here's something even more concrete to do:
ESRA EMERGENCY OUTREACH CAMPAIGN
You too can play an important role in showing your concern for those displaced by the situation in the North.
Many of these families have come with only a few of their possessions & little clothing, with no idea how long it will be until they can return home!
actions you can take!!
? clothing for ALL ages is needed at our ESRA second-hand shops to distribute to the entire Sharon area for the families from the North. Please bring your donations to: Raanana at 100 Ahuza Street (off Rehov Hankin) or Kfar Saba at 45 Rothschild Street.
? we NEED volunteers to sort clothing in both these shops and prepare them for distribution.
? We need volunteers to befriend the families from the North staying in the Sharon area and to offer practical and moral support.
? for details and to volunteer during this crisis call the esra office at 09-9508371
stop press
today, esra supplied 10 water units urgently required in Northern shelters
if you wish to offer any help or donate to the esra emergency fund Please phone our Herzlia office - 09 950 8371 (from abroad: +972 9 950 8371) or fax - 09 954 3781 (from abroad: +972 9 954 3781) with your credit card details or send your cheque (made out to ESRA) to ESRA, P.O.Box 3132, Herzliya 46104, Israel
By forwarding this email to your friends and relations here and abroad, you will be helping ESRA who will be helping those who are suffering so much in these times of stress and trauma.

Hizballah does it all the time.

Dear friends,
Many of us recognize the importance of the Internet as the new battleground for Israel's image. It's time to do it better, and coordinate our on-line efforts on behalf of Israel. An Israeli software company have developed a free, safe and useful tool for us - the Internet Megaphone.
Please go to www.giyus.org, download the Megaphone, and you will receive daily updates with instant links to important internet polls, problematic articles that require a talk back, etc.
We need 100,000 Megaphone users to make a difference. So, please distribute this mail to all Israel's supporters.
Do it now. For Israel.
Amir Gissin
Director
Public Affairs (Hasbara) Department
Ministry of Foreign Affairs, Jerusalem

So today is my wedding anniversary, and very little could keep me from celebrating - but the warnings of rocket attacks in the neighborhood kind of take the wind out of my sails. It's not just the danger, but the fact that I am endangered by a people who do no believe i have the right to exist. That hurts.

Still a little bottle of champagne might ease the pain. 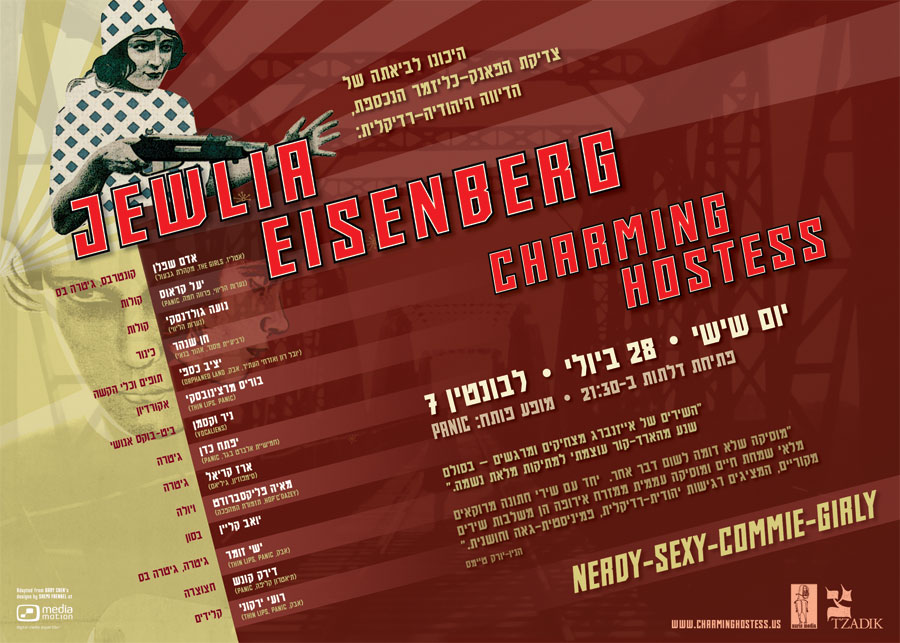 Friday Night - Jewelia Eisenberg - Levontin 7 - 9:30 - Panic Opens. There's such a demand that they've added another show on August 1. I'll be at that one.

YOU HAVE TO SEE THIS SITE- A VOICE OF SANITY:

I've long admired her - but now - what an intelligent and brave woman.

I am sitting here eating chocolate and wishing I could comfort the soldiers up north, and this email arrives offering to send chocolate to soldiers from Elite. You send the hug we send the chocolate.

I spent this day sealing all kinds of deals that depend on the fact that this war will not last long. travel tickets, book contracts, deals to work together with others, etc. They all obligate me to pay something or do something within a short time. In the afternoon I settle down and wait for my rocket. I can't write, I can't work, and have no way of fulfilling these committments of the mornings. And my situation - compared to millions of others in this country - is good.

It was a comfort to hear today that none of the people I knew in Maghrar were hurt in the shellings, and then i remembered that it meant that someone else was hurt instead.