It's time to admit it - we're scheduled to go on vacation tomorrow. who knows whether i'll be online or not? and who know knows whether i have the right to write about Tel Aviv if I'm not there.

My mother used to complain about my father - when they lived in Danzig in the '30s and had to move around all the time because the Nazis would find him and beat him up, my father would always mourn the rented room he had to leave - the comfortable bed, the view from the window, the convenient bathroom. So even though we've got rockets hitting Sderot and with our leadership who knows how it will escalate, i don't want to leave. 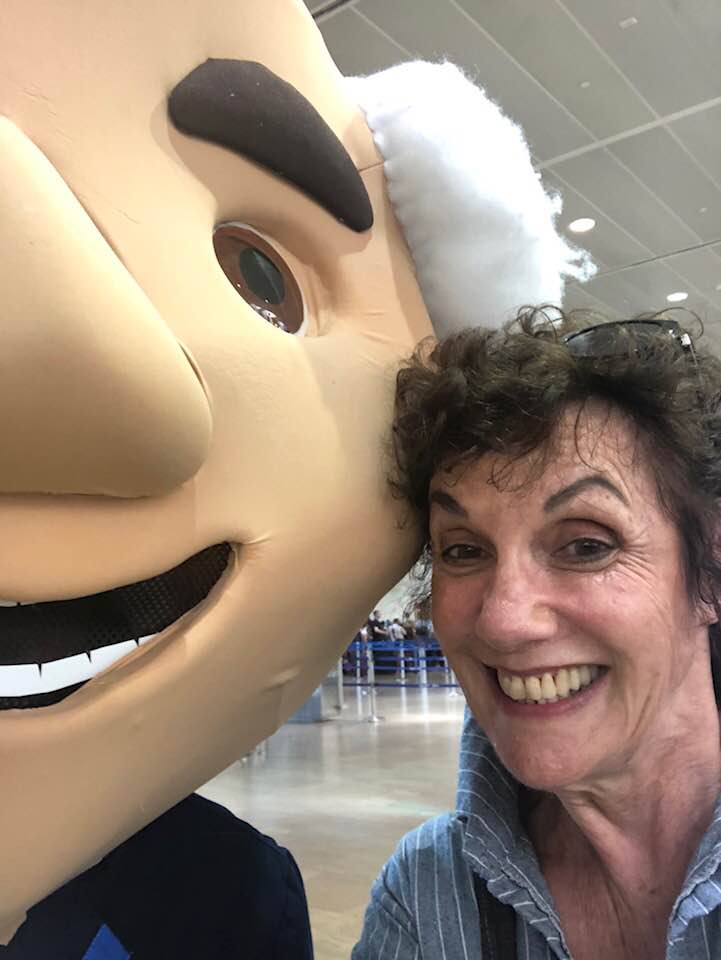 But the rest of the trip didn't go so well. I wrote about it on the plane and after and quote it here:

The middle seat in an economy flight and my bag under the seat is only within reach if I disturb the two strangers on either side. “you’ll have a great time,” my friends said, as if reassuring themselves, as I left for the airport, my suitcase only half-packed from the distractions of visitors wishing me well. ‘what did I forget?’ I kept thinking as I wheeled the case through the terminal. Something terribly important – ah yes – completion. I had lots of jeans, army boots and a long elegant dress, but no shirts, no shoes for the evening, no socks except those that fit into slippers. Did I remember my medications? All my make up? Who knows. And I forgot to pick out a book to read.

Worse yet all my candy needed against ear popping is in the overhead luggage, together with the neck pillow. All that’s left is my computer that refuses to link to the wifi, leaving me with no entertainment but recording this voyage.

The baby one aisle over needed only a teething ring, but his parents, who didn’t speak English, were clueless, and kept feeding and changing him until his irritation knew no bounds. Me I was hungry, my teeth hurt, I had to use the bathroom and wished I could scream like him.

Then, suddenly, the kid was given a biscuit and began to coo. That was the cue for an unseen child behind him to begin a roar like I haven’t heard since I was in the critical ward of a children’s hospital ages ago. It intensified, fed on its own hysteria, and didn’t stop until we landed.

But that was not the end of our trials. The first thing I saw when we entered the Copenhagen airport was a big sign saying the customs line is longer than usual and we must have patience. Oh come on – I have no idea what usual is. I have no idea what longer than usual might mean. And then as we’re walking down to the customs line we notice the duty free shops downstairs where a sign says “20% cheaper than elsewhere.” Oh my goodness – this is going to be a relative week.

Not that we weren't welcomed here. but those first moments threw me off.

It is day 1 of our visit to Copenhagen. Having listened carefully to all the advice I was given, we decided that the most important place to see is the Louisiana museum and with our limited energies and its distance from our hotel we would take a taxi. The concierge thought so as well and ordered one for us. But almost as soon as we began to move, Ezi looked it up and discovered that it was closed on Mondays. So we headed back for the nearby National Museum, about which no one had spoken.

It was a beautiful sunny morning, perfect for walking in the gardens, but we were at the perfect museum to spend a rainy day. And an overwhelming day it was. I would title it: an Israeli in another world. Let us begin with the history of humanity. Guess what – there was life thousands of years before we admit it in our museums. I was so impressed with the amount of artifacts they had about life, religion, burials, etc. in the region – the clothing, weapons, and tools seem absent from our own archeology of the period, even though the level of information (and the level of the English translations) seemed over simplistic and sometimes simply speculative. Why is it I know so little about life in the ‘cradle of humanity’ before Adam and Eve you think? Is it just me or do we Jews have an ‘agenda’? hmm.

But when we got to the third floor of the museum my criticism of our potential ‘agenda’ disappeared. The entire floor is crammed with ‘middle-east’ history. Greek, Roman, Egyptian, Syrian, Assyrian sculpture, jewelry, mummies, gods, etc. Palestine isn’t mentioned. But of course, much depends on what the acquisitions are and where and how they were acquired. How WERE they acquired? I’m sure some of the Assyrian materials would never had been saved had they not been taken out of Syria, but I can’t figure out how so many riches came to Denmark.

Why is there no mention of Judaism, no representation at all? Right, Jews don’t make images? Right, Jews don’t do elaborate burials. Right, there aren’t all that many artifacts, and when there are, we try to acquire them. Still it is strange, isn’t it.

And that brings me to my greatest illumination. Jewish art has never been sufficiently promoted. Jews try to bring their art to the world, not to promote their nation. What a ethno=centric tourist I am.

I walked on nails yesterday. And my knees wouldn’t bend. So I demanded the nearest shoe store and there was one right there – nike. Not the favorite for my feet, so I bought cushioned socks and was on my way out when I noticed some memory foam insoles. The kind and patient sales guy explained that they were expensive but they worked – 500 krone. Desperate, I bought them – and guess what – I walked all day and feel fine. Something called Formthotics I don’t know how long they will last, but they enabled me first to explore the neighborhood. Skt. Jřrgens Sř where the homeless sleep and the ladies take their doggies for walks next to the Planetarium, is just one of the gems of this city. 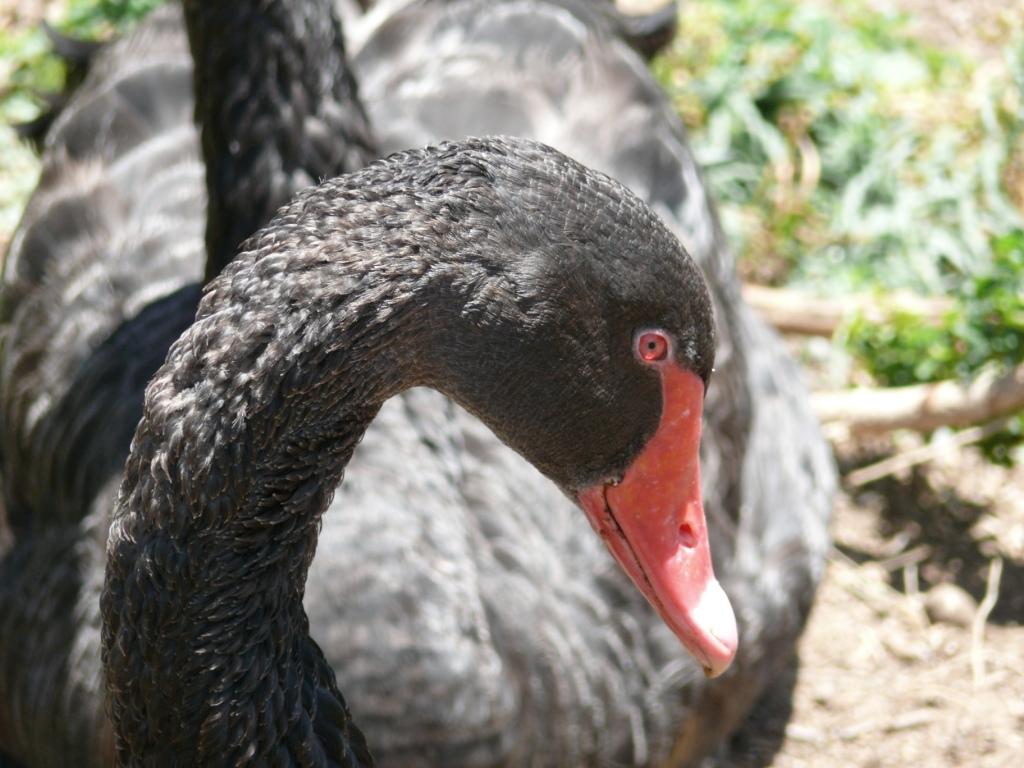 Used to my crippled state, however, Ezi ordered a taxi to take us to the Louisiana Museum. He thought I’d never make it through otherwise. I’m so glad the soles made the entire visit a pleasure because there is so much to see there, and a great deal of wonderful strolling. 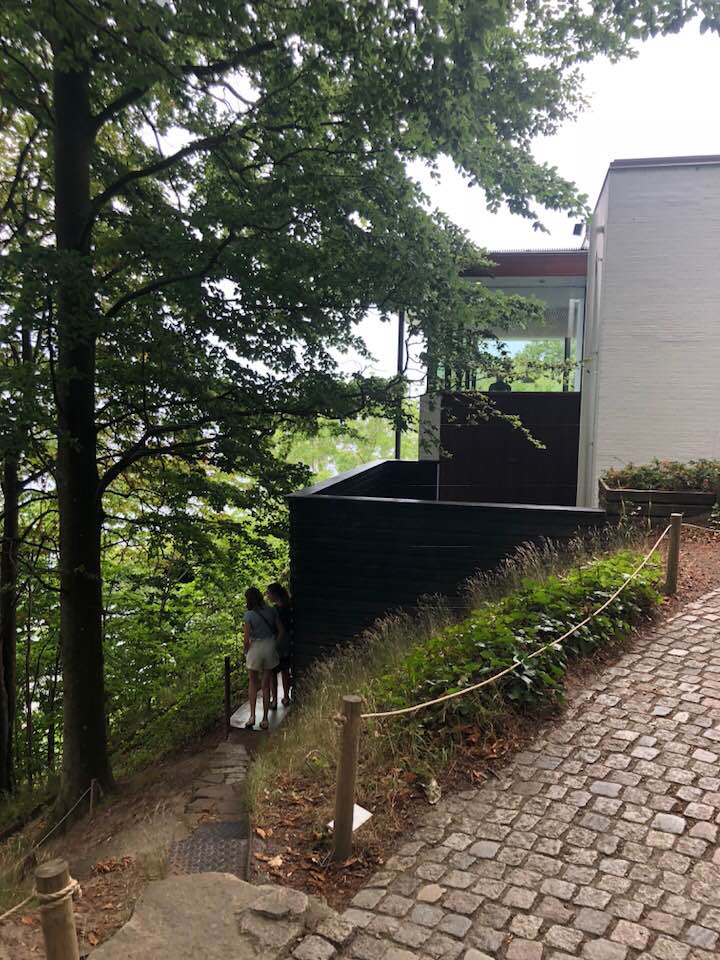 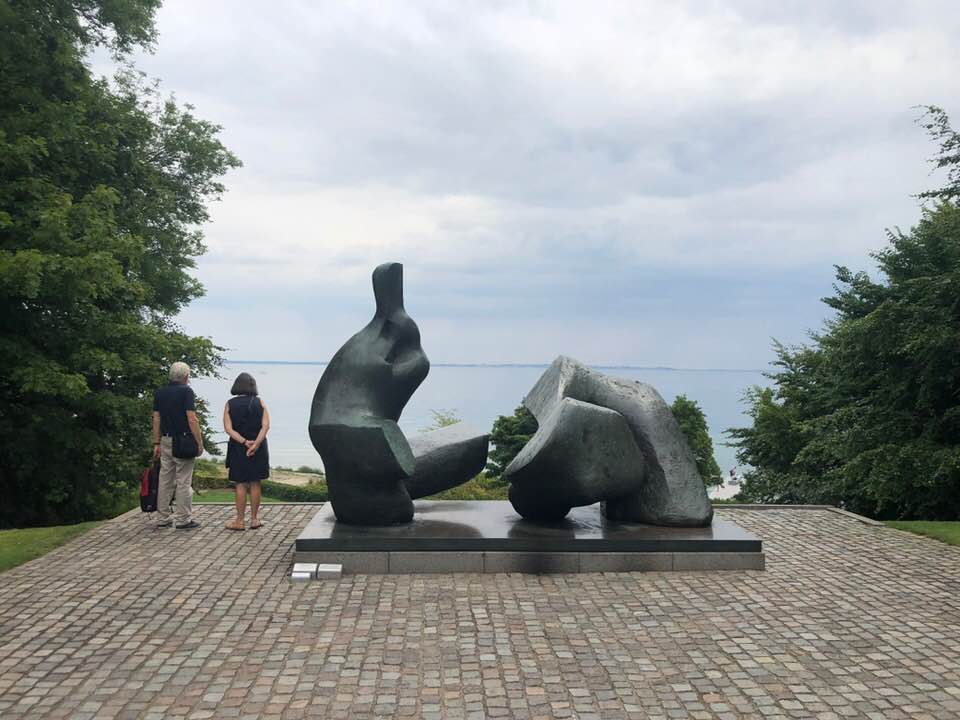 One of the surprises was an exhibit by Gabriele Munter, a German woman painter who was surprisingly good. I was surprised by the boldness and variety of her work, but although I am an expert in the work of forgotten women, I am no judge of the absolute quality of her painting. But I will now learn more about her.

Israelis are always travelling abroad, in part because our country is so small and there is literally no where to go, but also because the world offers so much that is new to us. I don't feel that way about the Danes. They may be historically the great shipbuilders and explorers, but I have the feeling they are not terribly interested in other cultures.

It makes me very jealous. They seem to be very happy in their lives and very content with limiting their working hours. Israelis are always hungry for more. We even sleep an hour less a night than most cultures.

We seem to be committed to Copenhagen museums. But today I insisted we stop first at the Great Copenhagen synagogue, having read that the cantor is there between ten and twelve in the morning and lets people in. it is an important place to me because even though this is a peaceful city the synagogue has been under attack more than once. The last time was at a bat mitzvah in February of 2015, when a community member on guard was killed. On the way, however, I got distracted by a pair of walking shoes in the Ecco store and was walking up the cordoned off street at the stroke of 12. The entrance to the synagogue was blocked by a police car and two soldiers were guarding the back. Under construction, a soldier answered me when I asked, and indeed a lot of construction was taking place there, but I had just read online that it was possible to enter. No luck. Such a beautiful greeting at the entrance and so impenetrable. 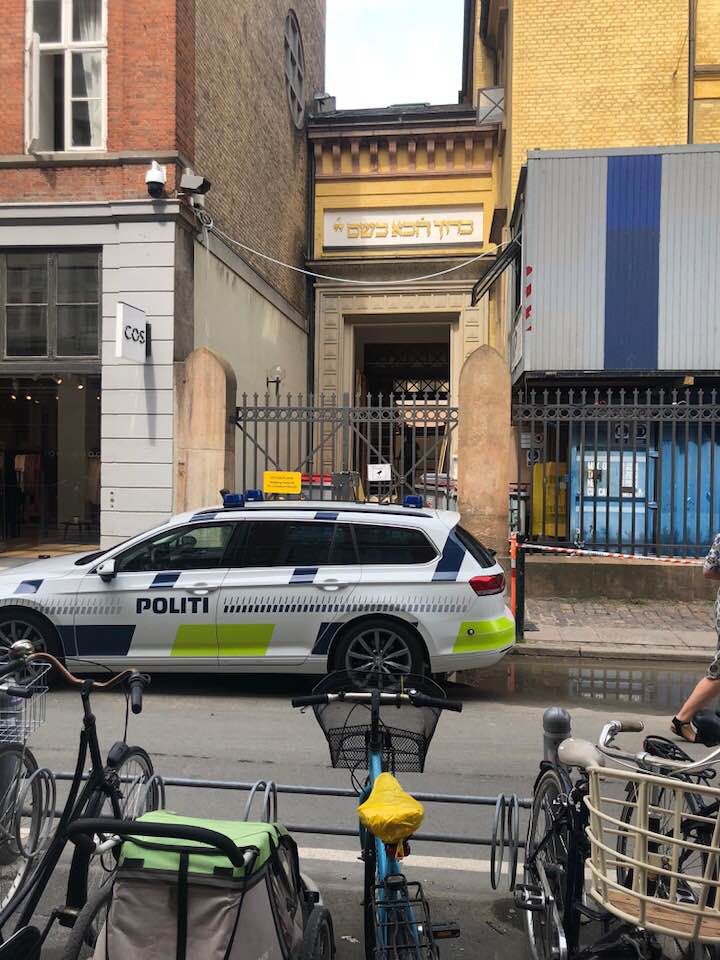