How do we get out of this and let Gaza keep its pride? So far we've suffered almost no injuries, lots of property damages, lots of financial losses, and nerves nerves nerves. But the Gazans are losing lives - so many so many so many. I can't think of anything else but the parents who are at a total loss to save their children - there is nothing, no access to the hundreds of tunnels in Gaza, no shelters, no food. Every once in a while some politician brings up the possibility of turning off their electricity - they have an enormous electricity debt to us - but who would take away the only thing they have? The food trucks keep coming in from Israel, but who knows how much and how it gets to people. The water supply... oy. And we keep hitting places where innocent people shield headquarters and missiles. why does a poor mentally challenged woman have to pay for the decisions of a government she didn't elect?

Of course, we're not such angels either, even if we are doing it right by the UN book.

The one good thing out of this garbage week is that there is hope that every country will have an iron dome and war will be ineffective in the future.

Acupuncture this morning. Before he begins Noam asks me what do i want to do in case a rocket falls. "You want to go downstairs to the shelter?" "With all these needles on my back?" "You want to stay here?" "Where will you be?" "Here. I have other patients who won't move." "So I'll stay here too," "I need you to sign a document to that effect." "Really?" "No, but you're smiling, so I've already helped the tension in your neck."

I've just been reading the Hamas Covenant that was translated by the Yale University School of Law. Now I understand a little better their hatred of us. Article 22, for example, explains " For a long time, the enemies have been planning, skillfully and with precision, for the achievement of what they have attained. They took into consideration the causes affecting the current of events. They strived to amass great and substantive material wealth which they devoted to the realisation of their dream. With their money, they took control of the world media, news agencies, the press, publishing houses, broadcasting stations, and others. With their money they stirred revolutions in various parts of the world with the purpose of achieving their interests and reaping the fruit therein. They were behind the French Revolution, the Communist revolution and most of the revolutions we heard and hear about, here and there. With their money they formed secret societies, such as Freemasons, Rotary Clubs, the Lions and others in different parts of the world for the purpose of sabotaging societies and achieving Zionist interests. With their money they were able to control imperialistic countries and instigate them to colonize many countries in order to enable them to exploit their resources and spread corruption there. You may speak as much as you want about regional and world wars. They were behind World War I, when they were able to destroy the Islamic Caliphate, making financial gains and controlling resources. They obtained the Balfour Declaration, formed the League of Nations through which they could rule the world. They were behind World War II, through which they made huge financial gains by trading in armaments, and paved the way for the establishment of their state. It was they who instigated the replacement of the League of Nations with the United Nations and the Security Council to enable them to rule the world through them. There is no war going on anywhere, without having their finger in it.

Boy, are we powerful! No wonder the Germans killed six million of us.

And i think the Inquisition totaled another half a million. Real conquerors of the universe we are.

And so we celebrate Bastille Day around here as another one of our successes. Right.

Because Maxim and Igor are installing our new air conditioners and messing up the whole house, we don't have the radio on, but i have an app that announced each rocket. beep beep beep beep beep. Five in the past 20 minutes. And Igor is sitting on the air-conditioner outside our kitchen window and fastening it to the wall. "What if there's a rocket attack?" I ask him. "Where will you go?" "Believe me lady, what i'm doing is much more dangerous than a rocket attack."

And so we ran to the shelter with the last rocket attack and Igor kept working.

That's it, I said last night. I'm taking a bubble bath in the morning. Who are you kidding, my alter ego said. And the rockets kept coming.

Remember the fights in grammar school, where one guy knocked down the other guy and is declared winner, and then leans over to shake the hand of the loser? and then the loser takes the hand and pulls him down and the fight starts over? so today we had that. Dirty fighting can be dangerous.

H9t sure we're making the mistakes we're making in Gaza, killing some wrong people. Certainly it's not planned. It is terrible. But I'm more upset about the fact that we haven't provided for security for the Bedouin population who live in unrecognized villages.

I try very hard not to write about my kids, not to use the lives of people i'm privy to in these pages. but think about this for a minute - my daughter with her baby in a carriage in the streets of Tel Aviv. A siren goes off. There's no where accessible to hide...boggles the mind.

and after the attack I go to rehearsal in the Arab-Jewish theater in Jaffa. I am a little nervous and ask the theater manager where the safe places are. He looks around the theater - "This place has withstood Salahadin and Napoleon," he said, "I think we'll make it through this attack as well." 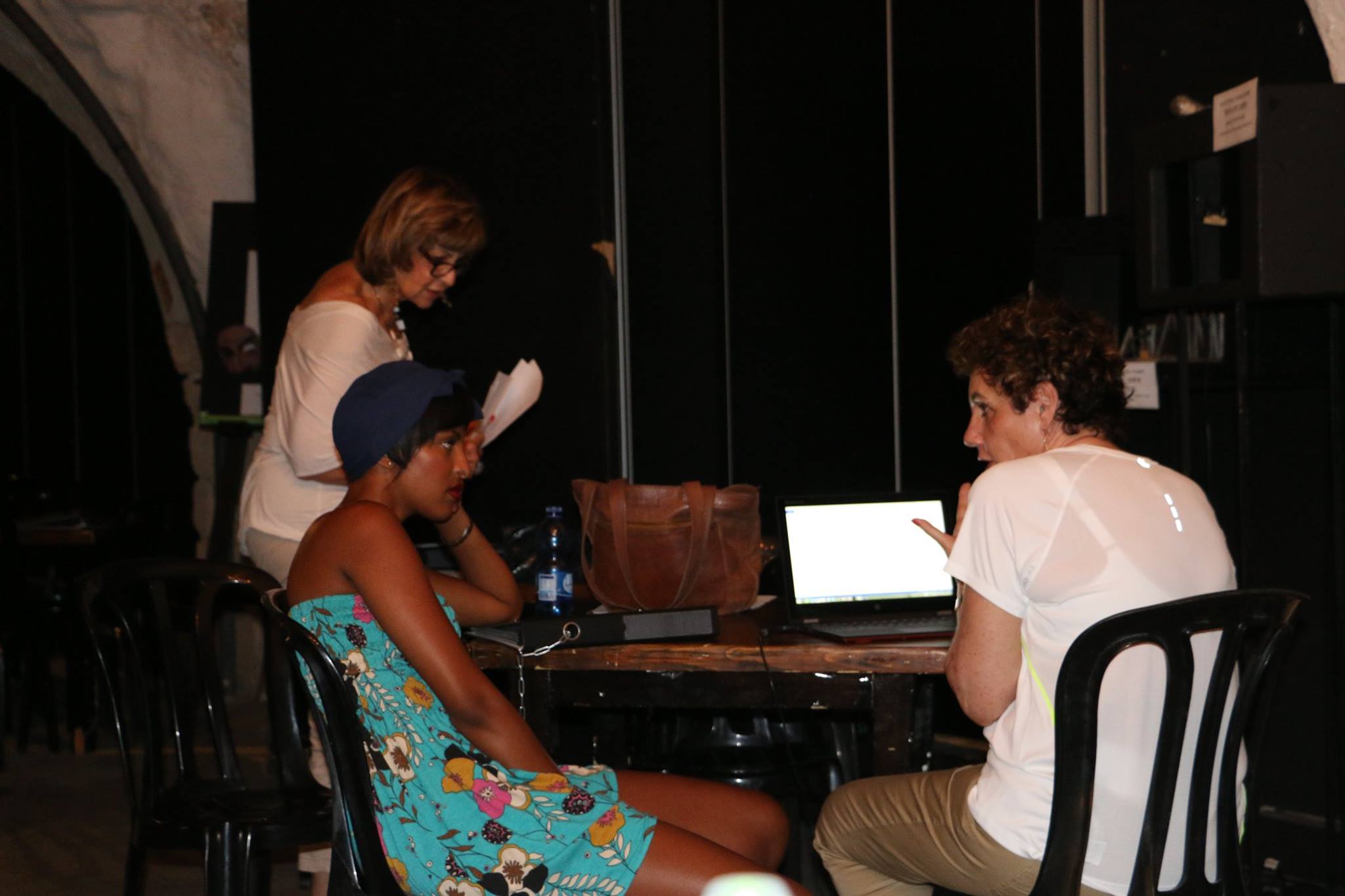 I’m kind of starring in a show at the Arab-Jewish theater in Jaffa. It’s about covering, and how poems are clothes and clothes are poems.

It starts at 9 p.m. and if you say the magic word, “Orpheus” the ticket is only 40 shekel.

I’d love you to come and help me get through this first poem-play I’ve done since the Israel festival almost 10 years ago.