One of my favorite myths about myself is that I was conceived in Holborn Station, one of the central underground stations in London. The factual basis for this story of my origins is that my refugee parents did sleep there during the Blitz, and were issued passes delineating their space numbers. And because the buzz bombs began on the night of June 12th 1944, and I was born on the night of March 29, 1945, the night they ended, I must have spent every night of my incubation there. The poem I wrote about it, that appears in my latest book, So Far, So Good, is one that gains an additional dimension in the musical CD Thin Lips. That I use it in two kinds of publications indicates its essential nature to me:

Deep deep under London: Here
is where I was first conceived
while my brother slept in the open valise,
my parents huddling to the air raid sound –
space number ODAQ 26 3
from 11 p.m. to six in the morning –


willing life
when above and behind them was
that mechanical old buzzing
warning
somewhere
someone would die.


I see the resemblance too, the way we are both
way stations, bearing signs
of our traumatic past,
but except for measured stops, concerned only
with the hubbub of the moment.


It was a myth I had created in recent years, when the terror struck the Twin Towers from above and suicide bombers on the streets of Israel threatened the surface of my world: The depths of the earth became a womb for me, a place to hide from blind hatred, a sanctuary from mass anonymous murders. Even though our universe was falling apart, there was a shelter that had proved itself, that had saved the lives of millions of people in a war that had destroyed the lives of millions more.

It was order and control that had saved all those people, I thought. That British sense of logic, coolness, responsibility. The back of the admittance card listed the rules that seemed to me to be like a charm to keep one safe.

It was profiling that caused my parents to leave England. My father's imprisonment as a communist in Lithuania when he was a teenager made the British Authorities in Palestine return him and my mother to Danzig on the eve of Hitler's invasion, and to allow them into England only temporarily, as agricultural workers for the war's duration. The booklet that tracks their every offer of employment and their every request for a change of address, their continuing temporary status, shows how careful the government was of strangers in their midst. And although I sometimes regret the fact that I could have been born in Palestine or brought up in London, I respect the necessity of sovereignty.

In the weeks before the multiple bombings of transportation vehicles, we were wandering around London, traveling on the Tube at least four times a day, giggling at the proper British sense of order that placed signs reminding people to drink water in the Tube instead of finding a way to cool the air, and yet filled with respect at the quiet unobtrusive control in evidence in the places that really mattered. It may not be true what they say, I thought, that an 'incident' is just a matter of time, not a matter of 'if' but 'when.'

But I was just dreaming in the face of an obvious reality.

And now as I write there are still bodies trapped under London, innocent lives lost needlessly, and thousands of lives of the injured, of loved ones and of witnesses which will be changed forever. And the amusing ingenuousness of my imagined tea with a familiar dotty aunt in Holborn Station, is just another, minor victim, of the world that is at war with an enemy now embedded within.

Ezi is back. What with terror and hurricanes, that is no small feat.

Our own olympics begin tonight: This is the first time I can remember of the Macabbean Games that I actually know an athelete. Linda is representing Israel in Golf. The Grand Opening means that we will not be able to drive to Tel Aviv tonight - traffic jams will be unbelievable on Rokach. But I have a strong urge to go to Mishmish -

(Later that evening) No traffic jam, and as they say in Hebrew (which comes from the Arabic), no watermelon. Whatever that means.

But anyway the opening ceremony is on TV so I will stay home with Ezi.

The Germans around here used to say, and i translate literatlly: "In July and August/ Only if you must." I think they were referring to sex, but maybe they were following the old Bedouin tradition - of moving as little as possible in the summer. It's good advice. But Lisa, in her much-praised blog, skips over the issue with easy grace. She's been in hotter places. I have less and less tolerance for heat and it is getting hotter and hotter.

So I would like to live like Ezi did when he was a kid in the summer. Beach. 'Pension.' Nahariya. (The impression I get is that except for the maternity hospital where the screams and curses were constant, the place was paradise.) Once my cousins, the Kaganoviches, took me to their 'Pension' in Nahariya for a week, so I know something of what Ezi is talking about. But I was 20 then and contstantly pursued by local youths. My cousin, who shared a room with me, remembers being awakened by serenading boys under my window, and I recall men fighting over the right to 'show me' the countryside. This amused my relatives no end. I don't remember experience so intense a concentration of male hormones before or since.

But, ah, I digress. Those times are long gone and the freedom to use your time for unmitigated rest and pleasure without guilt is gone with it.

We were on our way to buy a new doorbell and some other household necessities, maybe in Ikea in Netanya but i was feeling rotten so I turned on the tv instead - and there was an attack. a suicide bomb. at least 2 victims. so we don't need a doorbell. we need some sanity.

Is there a connection between this attack and the London attack Acceptance. In the name of democracy we allow people to preach and condone violence, when we should be doing everything to stop the sources of this kind of action.

To find out about family in the Maccabiad Ha'aretz has a hotline site.

I wrote that this morning - this afternoon I found myself speaking to a friend on the extreme right. I wanted to provoke her, to make her rethink her position. "The world hates us." I said to her. "Why?" "They say we're violent, we're greedy, we want land." "They don't? - like the Britisn in Ireland, the Americans in ...." "But we don't have any friends in the world." She looks me in the eye with complete certainty. "We didn't have any friends Before there was a State."

She's right, another friend says. And I hate her.

Bastille Day - we don't seem to celebrate in this country for some reason, but i have decided to celebrate it myself by watching Lawrence of Arabia on TV. The concept of changing the past, of creating history, is common to both, and necessary to all of us.

And now that I think of it, Ezi photographed us together - me and Lawrence - only 2 weeks ago: 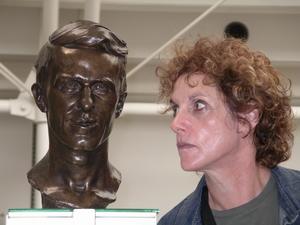 We do make a fine couple, don't we.