Another day and another bunch of victims: some terrorists, some children, some injuries, lots of trauma.

I woke up this morning to shouting in Arabic, and then a lot of noise and trembling. It took me a few seconds to remember that the driveway outside my window is being repaved.

He wets his bed at night and in the morning
runs to the junction to throw stones. What
did he eat for breakfast? Who washes his clothes
when he comes home at dusk full of dust and the sight
of his friends (from the same bench at school)
fallen in blood? Behind him his uncles
are urging him on and shooting over his head
at soldiers still boys themselves. In the kitchen Mother
wrings her hands and takes comfort in the fact
that her child is her savior, alive or dead.

I too dream of you every night, child,
small and scrappy and hard to control,
determined to change the direction of generations,
full of disdain for the days just gone by,
sure you can make it by the force of your anger.
I dream of you not as your foe, but as one
who has heard screams like yours in the night
and do not want to reassure you with dreams of paradise
for martyrs, as one who has grown up with my own
enemies and bogeymen, have known children
holding up their hands at rifle point on the streets,
walk every day with brothers and sisters
who died before I was born.
And in my dreams I hold you and feed you and read you
a fairy tale, a bedtime story, still believing I can keep your fears
from growing up true, teaching you gently
from your folklore and mine, tucking you in
and promising to wake you
with a new morning.

We open our eyes and turn on the news. Those are our mornings now. So far, only three missiles. We also see the destruction wrought on Gaza, but no names of victims are given. Let's pray today is quiet for all.

A friend in Ashkelon says she doesn't take showers any more - she says if there's a siren she'll slip getting out of the tub and will get blown up in an embarassing position. She says it's not death she fears, but shame she fears. Almost as neurotic as I am.

"Why wasn't I invited to read?" a fellow poet asked me when she heard about the poetry reading at "Halalit" we had on Monday. I didn't think anyone would be interested in a poetry reading while rockets are falling. So here are some photos. 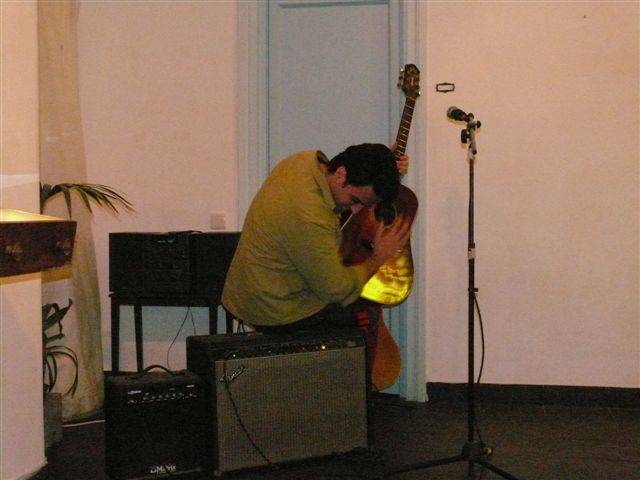 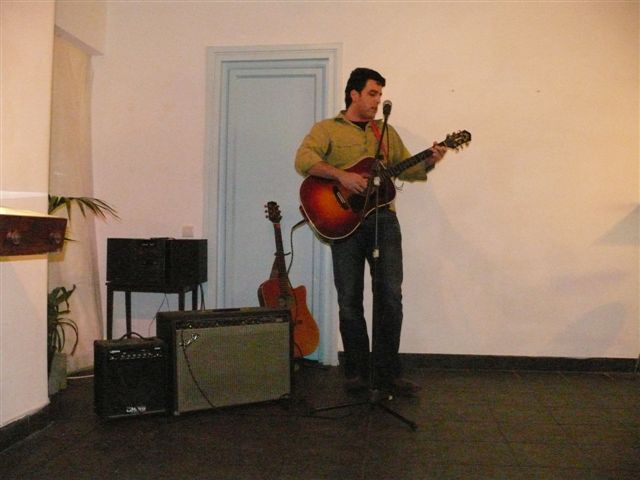 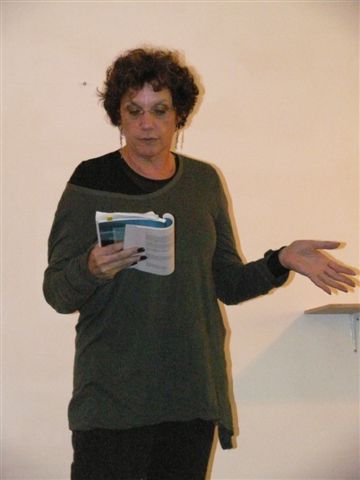 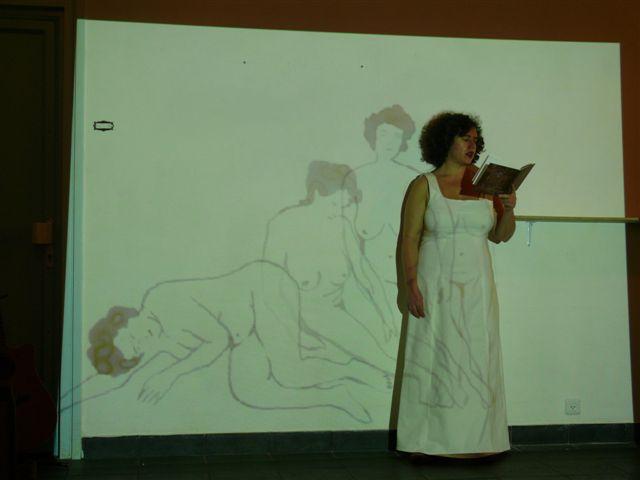 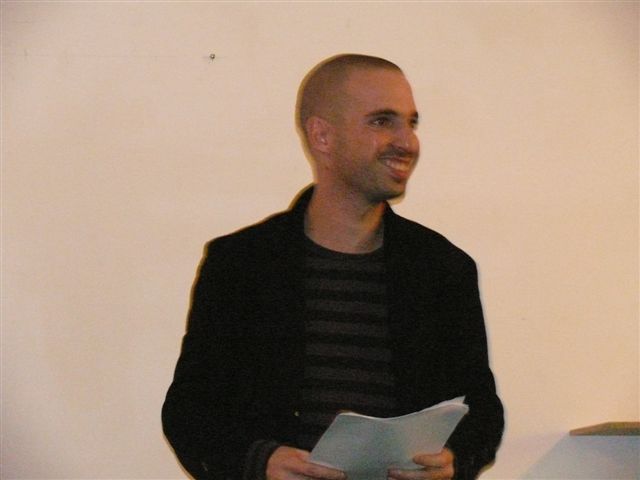 We didn't mention politics. Although each one of us has very extreme opinions, this was a moment of poetry and fun, and the hints of a crazy world were ignored. When Oren sang, "Something weird is going on and I don't know what/ But I know that it's a dream and soon I'll wake up," we didn't discuss it...

Hillel Schenker has a clear picture of the Tel Aviv alternative here. The only thing it doesn't mention is the obvious fact that well over 7000 rockets have been fired on Israel in the past 8 years, and that much of our efforts have been in preventing injury to local citizens. He doesn't mention it because it goes without saying.

It may seem trivial right now but Let Live is trying to save the animals abandoned by people fleeing for their lives from the south.

I want to share a letter with you:
I was reading your tel aviv dairy when i came across what you wrote on December 29th 2008 when I decided to respond on what you wrote, and maybe share with you what an Arab student from Nazareth who studies in the university feels.
In the same day of the demonstration i had a meeting with a teacher in the university, when we finished the meeting he looked at me and asked me why I wasn't in the demonstration and how i felt about being an Arab student in tel aviv university these days,? for 5 minutes I couldn't speak I didn't know what to answer, and then i took a deep breath and told him: there is no one who is right and no one who is wrong, there is no good guy and no bad guy what's happening is inhumane from both sides, its beyond me how someone knowingly could kill another human being. each side is trying to show the world that they are right while they are killing children.
As Arab students we are immediately asked to pick a side but how can we... as an Arab student I try not to talk about politics in the university because its a dead end there is to much history to ignore.
being an Arab Israeli we don't know where we stand in the world. When I'm asked what am I? I don't know from where to begin I'm a christian-Arab-Israeli, and then you get the question is there such a thing? which brings you to talk about the history to make the person in front of you understand who are we when we ourselves don't know.

In this time of terrible warfare there is a point we must constantly keep in mind: to remember the humanity of all the participants and to try to minimize harm to human lives whenever possible.

There is another point here. When the peace talks fell apart in 2000, I was watching Naim Araidi in a children's program in Arabic on TV. He began the discussion with a circle of teenagers, and quoted Kennedy, "Ask not what your country can do for you; ask what you can do for your country." A profound discussion ensued which began for me something of the understanding of the situation of Arabs in a country for which even the national anthem excludes their identity. (Because I am a Zionist I sing the anthem, but we could also include the 20% of our citizens who are not represented by changing or adding a few sentences.).

I've dusted off our flag and am getting ready to hang it up on the dalcony. It is a strange impulse, born of much debate. The amount of energy we expend on debating on ethics is exhausting, but I've finally decided to let the flag speak for us.

A few words with a close friend from the US last night on the phone got me thinking about it - he assumed the war is unnecessary, and that I agree. So here are my criticisms and my conclusions. 1. I would have been much happier if we had made more direct efforts to speak with Hamas. 2. Hamas has been sending us antipersonnel rockets for years on civilian targets and trying to kidnap soldiers. Gilad Shalit was in Israel when he was kidnapped. That fact alone is causa belli. But we did nothing - except accept their threats, attempts at humiliations, and propaganda. 3. The world expected nothing from Hamas - no discussions, debates, proposals. 4. The rockets are still falling on Israel. 5. The attempt to minimize damage to citizens in Gaza is one of the causes of Israeli soldiers being wounded and killed right now. 6. While we all seem to agree on the number of casualties in Gaza, Israel and the rest of the world don't quite agree on the percent of civilians lost. Israel says less than 100. Palestinians says most are women and children. 7. In fact, most of the international news runs counter to what I know from people who are actually activating elements of the war. And as parents and partners and relatives and neighbors we are never ignorant of what's going on. 8. Even though I am constantly aware of the situation of the Arbas in Israel, I really believe they are in much better shape than they would be living in any Arab country, even though we have no oil.

So I'm hanging out my flag.

If you're not afraid to, you might want to do it too. Members of my family, by the way, have been getting death threats on Facebook -

A few Americans asked me if there is an Israeli site from the government for information: The Israeli Embassy in Washington is a good place to start. And for a respite from war, take a look at some of the scientific achievements Israel21c

When I read Sayed Kashua's piece in Haaretz this weekend, Hit 'em where it hurts I cried. The irony was beyond humor, and yet, i was sure, there would be Arabs who would shout "traitor" and Jews who would envelope him as a 'good Arab.' Today he appeared on the news to explain that he was being ironic, and he looked like his heart was broken. Israel, after all, did not honor the Tadiya, he said, because they didn't open the borders. So it was Israel that started it. Although I don't agree that Israel should have opened borders while Hamas was racking up more and more weapons, I do think Kashua has a point, and i was very pleased that he was given a chance to make that point.

Happy Birthday Khalil Ghilbran! born today in 1883; He said "There are in the Middle East today two challenging ideas: old and new. The old ideas will vanish because they are weak and exhausted. There is in the Middle East an awakening that defies slumber…. It is growing and expanding; it is reaching and engulfing all sensitive, intelligent souls; it is penetrating and gaining the sympathy of noble hearts…. (“The New Frontier”)