down today - up tomorrow

It has been an impossible task, trying to back up the computer of a hoarder. So we let it alone for the weekend. We explored Ramat Aviv in the morning (narcissus all over Ramat Aviv Gimmel) and the cinemateque of Hertzlia in the afternoon (just like the old art cinemas), There we saw a documentary of Eric Mendelson that proved quite fascinating. It was surprising how little the three of us knew about him - Rachel of the Erez Yisrael history, Ezi with his background of architecture, and me with my fascination with German immigrants to Israel. We didn't even know that Mendelson was a friend of Einstein and built his observatory in Potsdam. We didn't know that he left everything he had in Berlin and escaped to England where he built the De la Warr pavilion in Brixhall. We did know we were indebted to him for coming to Israel and setting the pattern of building in much of Israel - the Chaim Weizman house and labs in the Weitzman Institute in Rehovot, Hadassah Hospital and the whole Jerusalem Stone concept in Jerusalem, the style of building in Tel Aviv.

We went to the movie by default, having found ourselves unable to travel to Jerusalem for an opening, but we were not sorry. 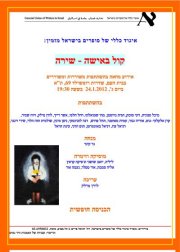 If you can't read this in Hebrew you probably won't want to come. But it's on Bein Haam off Rothchild Street.

Have I told you about the cousin I was looking for in Russia? Wait For Me is coming to Jerusalem and I'm to bring my brood there with me next week. This cuts into my schedule of profound thinking, but I'll try to make up the time by sitting around the hospital and avoiding the eye of the nurses who constantly have errands for me to run. Ezi always comes home from the hospital fresh as a daisy, while I take to my bed after a day of running around from clerk to clerk.

And for those of you who can't get enough of hospitals, here's an update. Once we get all the insurance approvals, the zevalin can be ordered from France. It takes 2 weeks to get here, and has to be used immediately, and there are two technicians who can do it, so it has to be carefully planned. The strange thing is that although we do most of the leg work, it is the doctor who does at least half of the secretarial work. He has no secretary, and apparently hates writing on the computer, so he writes these complex letters about recurrent follicular lymphoma with a fountain pen in elaborate calligraphy. His phone never stops ringing during this time and he has to answer at least half of the calls. As I sat there I figured that a part-time secretary would not only have saved him 50% of his time, but would have allowed him to see twice as many patients.

And that might have prevented the backache I have now from waiting in the hall for half an hour.

Because of the "Mehadrin" buses where women sit in the back, I've been getting a lot of questions about whether women are suppressed in Israel. So here are a few words. The responsibility for self-control in Judaism rests on the individual. Joseph didn't give in to Potiphar's wife, and when Samson gave in to Delilah it was his weakness not her temptation. When the foreign drunken conquering heroes give in to ladies, it's just another aspect of their foolishness. So the whole business of the siren call of a women's voice is just another aspect of the necessity of keeping the extreme religious away from a world that is much more attractive than theirs.

As for the freedom of women in Israel, I'm earning as much as my male colleagues are and I can walk anywhere in Tel Aviv - day or night - without fear (except the old central bus station where the illegal refugees are forced into crime by the situation).

Last night we protested the entire denigration of women in the customary way. We went to the "Beit Ha'am," a building that was lent to the protesters (2nd and 3rd floor above the Infinity Franchise - a nice piece of irony) on Rothchild 69 (a bit more irony there). We read poems to each other and applauded a lot every time some one said something that suggested protest or revolution. I loved some of the poems, and the poets, like Rony Somek and Schulamit Hava HaLevi, but there were a lot of beginners who need encouragement, and some who need to be discouraged.

I think I've got the management of my shuk shopping down to a fun enterprise. I start out from the direction of Allenby and move toward the sea. Today, I bought some shirts for Ezi from Shai, and a necklace from some other guy I didn't feel like talking to. There were a lot of other 'items' I was looking for that I didn't buy - tights, scarves, night shirts - didn't really like what I saw. Then to drop the stuff off in the car and on the I managed to have a little conversation with Yoram Kaniuk who was sitting in the restaurant across the street from Pappa's, but that wasn't part of the plan. Then a great lunch with Sharon, and then - the vegetable shopping. This takes place further west toward the sea, and since my criteria includes nice salespeople, there are a number of places I skip over. I don't like to buy spices in the open market, even though they look tempting, because they're OPEN. And it took me a while to find a cheese person I like. I haven't even begun exploring the oriental markets - Thai, Philipine, Chinese, etc. But with the lunch break in the middle, I now feel I can start really learning about what's going on there.

I know I should be working when we're not running around the hospital or doing chores, but this afternoon was total pleasure. The port of Tel Aviv, bathed in soft sunlight, would have been perfect for shopping were I not with Ezi, but being with Ezi made it perfect for romance. We had lunch at Mul Yam, of which I have written in the past. 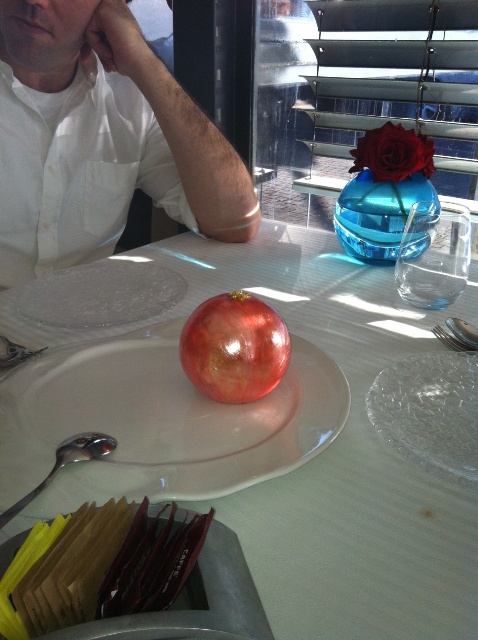