Hanging Around The House is out!! for a mere 30 shekel you can get it directly from me. 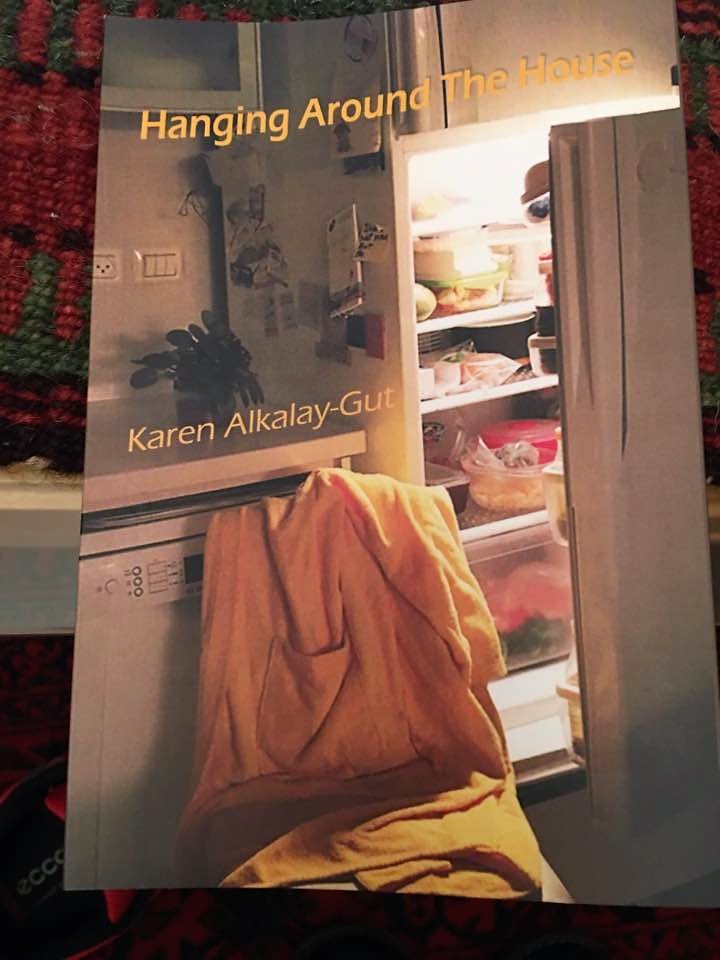 too rough a day to say more about this.

I looked at the map of the settlements. looks like chicken wire. holes of isolated Arab villages. There is something evil about it. but this may be because of my warped vision. As Alexander Pope said, "All looks yellow to the jaundiced eye."

Maybe it also had to do with the fact that all my passwords got corrupted, and I had to change them. my passwords are beautifully complex so i don't think they were hacked but it was irritating nevertheless. what is the possibility that the mess was connected to one little grandchild who also messed up my desk in his rush to play a video game?

I've been to this cafe before - it's always crowded and feels exciting, but i can never figure out why. i still can't. but it is.

anyway we were trying to figure out how to start up PEN, and suddenly it felt like a subversive act just because we were in a cool place.

But what really is revolutionary is the role the television is playing in uncovering government corruption. I cannot believe the daring in the investigations, in the documentaries, and the changes already made in our society. Retail fraud has been the most obvious and easily altered by public recognition. Bank corruption is a bit more difficult. But political fraud and corruption and/or mismanagement is uncovered daily in television investigations and very very few changes.

Where has the time gone? The case of Lior Ashkenazi has made it impossible for me to watch news. The NYTimes has been boring of late, and who knows what else will happen that i can't control. So instead i do things. Yesterday was the launch of Dara Barnat's book "In the Absence," and since I have known her from the time she was just beginning as a student and to now that she is teaching in the department. An amazing book of poems. On the 9th i read a poem in Hebrew about my aunt Malcah with the publication of the journal of the Hebrew Writers Union. on the 19th i give a lecture in Yiddish on Yisrael Emiot, and on the 27th a shtik at Antishefa. All of these events are new and exciting to me, and I'm sure they will be to you too. More info to come on my event page.

For the the most exciting part of a great day was the fact that I am finally learning how to do TI. I am not easy to teach and we got a different teacher today who caught my attention and forced me to learn. i would have given up long ago had it not been for Ezi's eagerness and his success. After all, the night and the cold are enough to deter any but the strongest willed.

Or the foolish lover.

Yesterday Rafi Weichert called to tell me he had just taught a class on my poetry and it was very intense. Especially when it came to the poem about my father's stroke. I was at the museum with Ezi and Omer and couldn't concentrate on our conversation but was moved that Rafi called to tell me.

My father fell in Babel
from the tower
and now every hour
tries a different way to let me know something. What is it? I ask.
mmmmm
Do you want Mother?
mmmmm
Money? Does it start with m?
Ah you want the bathroom!

mmmmm and a nod.
"Don't
put words in his mouth!" My mother groans.
"He doesn't know what he wants." The aide
assures me, and then a smell
rises that proves he does.

In the nursing home
I kiss his quivering cheeks, lock
with those clear eyes so much like mine,
and leave him
alone, crumpled by the tower


Today Carinna came to talk about her doctorate of Anna Margolin, and half way through I found myself saying. I have no reason to direct you on this - no payment, no honor - except for the terrible hunger I have to communicate and she expressed admiration for some water colors on our wall. And I told her they were done by Ezi's father and he had no shown any of his hundreds of works to anyone when he was alive. And then it hit me. My father's stuttering attempt to say the word "Mogen," bowels, was only understood by me, and this is where that need to direct theses, to write biographies, to give talks (as I am giving in 2 weeks about Israel Emiot) comes from. the fact that i hear the speech sometimes of those who need to communicate, and deserve to be heard.

Family day. Dutiful grandparents, we spend 2 days cooking lunch for Saturday afternoon, and then we go to the park with the kids to spin them around on the wheel and the swing so they can't digest the lunch we cooked for them. it is the only revenge grandparents have left on their children because we're not allowed to give them sweets any more. Seriously folks, being able to participate in the lives of growing children is an amazing advantage to living in Israel.

The MLA resolution to boycott Israel was voted down today. A tiny bit of sanity remains in this world. I mean an academic boycott is counterproductive. that's why i want to help out with forming PEN in Israel. People have to exchange ideas, not impose them.

the tragedy of today's attack is beyond description. yesterday the family discussed two of our grand nieces - one who wants to be an officer and the other who just wants to keep teaching in the army. they could both have been on a tour of the history of jerusalem that was mowed down today. They weren't.

Alan Dershowitz said today that Netanyahu should be prosecuted only after he leaves office. But who could bear having him in office if any of these charges against him are true? It seems all the bits of gossip that have been going around against him in the past decade are coming together to form a very ugly picture. Actually every bit of gossip that went around made me recoil in horror.

today was one of those days that were very busy but looking back there was nothing in it. Haggai had me rehearse my little shtik for him, or his little shtik for me for the Antishefa afternoon on Friday at 1 and I suddenly realized what he is at – peeling away the extraneous, the emotional, the fake. My whole performance is 4 minutes and I have to do it deadpan. I am sooo not deadpan. It is a very good lesson for me to condense the feeling in my words to the words alone. This is a country of extremes.