there was this film "insyriated" that i bought 2 years ago but was afraid to watch. it stars Hiam Abass, my heroine, but it sounded too scary to see before bedtime, which is the only time i get to see movies. and anyway Ezi wouldn't like it. so tonight i found a perfect friend to watch it with. she loves tragedies and the film is about a family stuck in their apartment in the middle of the war in Syria. it doesn't end on a totally tragic note, but the whole mis-en-scene is terrible. wow. what a film. find it and see it and tell me what you think.

I never believed how much i could love the sun shine - but these past downpours have made me a worshiper. Even though I had to spend a few noon hours at the Macabi clinic (because the technician insisted that I had come too early and took every one else before me) I got to take a walk in the neighborhood and in the afternoon and saw the way the trees and bushes and flowers expressed their joy at the showers. There were birds I hadn't seen in ages - wrens, hummingbirds, bulbuls - but no people. wonderful! Nevertheless, when i spoke to my friend up north and asked her if there was flooding, she said, "No, we have fields, not concrete, and our water goes into the earth." I do hope we'll have more rain, but not all at once.

A day of doctors began with the orthopedist. I explain to him that i have had a pain that runs from my back to my toe. "Ah," he says. "Sciatica! " "But, "I qualify, "it only comes at night.""Ah! Night Sciatica!" "It starts in the evening..." "Evening-night Sciatica!" And after some poking and hammering he gives me a prescription. "Will I be able to do the Israel Trail tomorrow?" "If you're used to doing it."

In short, a perfect diagnostician.

Following this we went to the immunization center to see what shots we need to get for Egypt. "Are you together?" the secretary asks. "For the time being," I answer - and the mood is set for hilarity. The entire floor broke out in laughter - it was the end of a long, hard day, with sick patients to deal with, patients who are addled and angry.

What made me think we'd make it to the Israel trail at 6:30 a.m. ? we woke on time, looked at our packed bags and our lunch, and didn't move. it was clear that the desire to see the country and learn its history wasn't going to be fulfilled. But who could stay home on such a gorgeous day that had been dedicated to travel? So we wound up in Caesarea.

It has been many years since i've visited Caesarea and i have to admit i didn't recognize it. Someone has been pouring an incredible amount of money in digging out the layers of glory and it is really astounding. The NY Times had recommended it and I wouldn't have thought of it otherwise - but it was spectacular - centuries of history spread out before us for miles. And we had a great meal at Helena's 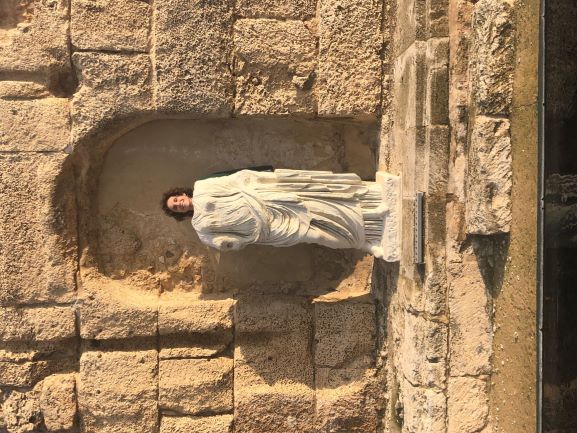 but on the way home we listened to the news and the layers of corruption in our society - all the dirt that is coming out - and maybe maybe maybe it will be over soon. maybe a new generation of honest people will help us improve the world.

p.s. i don't know why i keep getting my photographs on sideways. help!

There is one relatively good thing that happened today - the right wing parties excluded the Kahanists from their party tonight. At least that. There is also the possibility that Bibi won't manage to get himself immune from prosecution. On the other hand. Rockets are falling all over down south - school kids playing the yard had to lie on the ground to protect themselves from the possibility they would be hit. What can be worse than the trauma of being attacked. getting hit.

i got a warning on my phone (as many Israeli subscribe to) to tell me the rockets were falling in the south. i was getting my hair cut and couldnt decide whether to tell anyone in the salon or not. Why shouldn't they know? why should i be the only one to suffer? Of course i kept quiet. nothing to do for it anyway.