It is rarely from lack of subject that i don't write - more for lack of time. But this time i felt like a mosquito in a nudist camp: don't know where to begin. Daniel Freedman, King Abdullah, Tahir Rada, me....

My friend who has moved to the US in recent years, says he feels like a refugee. A political refugee. He said it, and i could barely answer that a refugee has no alternative. You could stay here and fight for justice. And then a terrible weariness came over me - and I admitted to him I'm often too tired to fight. And he said, you see?

My friend, who speaks as much Arabic as I do (unable to carry on a conversation unless the encounter is unexpected and totally stress-free) us always throwing in words in Arabic as if it was her first language and her English or Hebrew is foreign to her. I was listening to her the oher day and couldnt help thinking about the way Jews seem to take their own culture for granted, and try to embrace other cultures. Me too. I remember so many refugees from Germany who spoke only German until their last day and quoted Goethe at length and lived in Israel precisely as they had lived in Germany. And all those Jewish-American literary critics who shaped the literary values of the United States for generations (until Said came around...) and so forth and so on. So when we came 'home' to Israel we didn't know what to do with ourselves.

Sasson Somekh was talking last night about the Jewish community in Safed who spoke Yiddish and Arabic, and reminded us all about Shaike Ophir, that late great comedian, who came to Israel speaking Yiddish, studied in an Arabic school in Jerusalem, and so spoke the two before he learned Hebrew. I didn't know that fact about him, but it explains why his absolutely greatest shtik is when he plays an Arabic teacher of English trying to teach Shakespeare. ('Amlet, ya ibni') and he explains what a monologue is - a person talking to himself. And then a dialogue - two people talking to themselves. 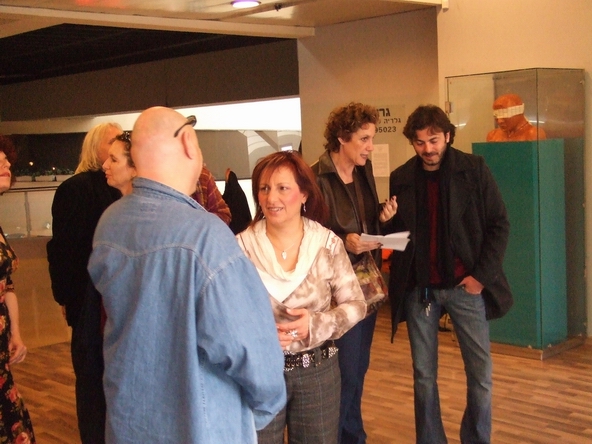 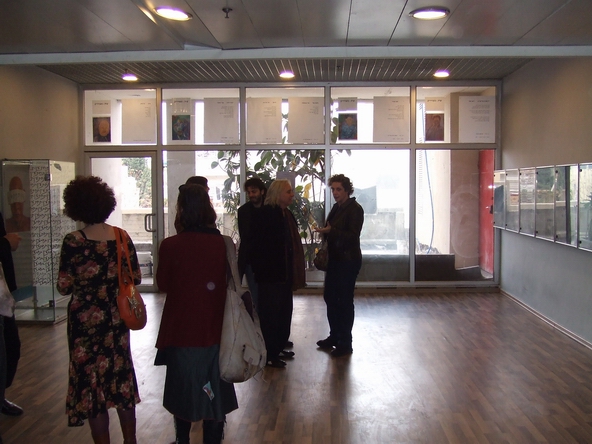 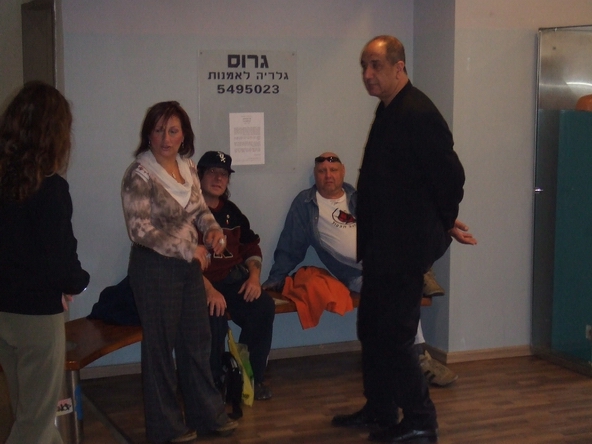 And while all that was going on, if you went one floor down you'd find a proper bookstore: 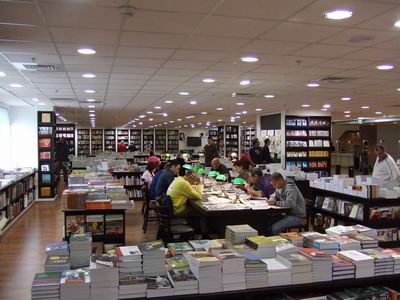 And one floor below that, the Friday afternoon food fair: 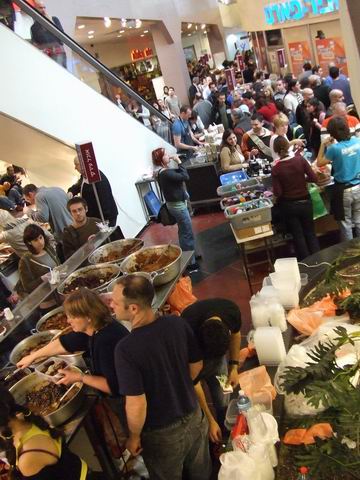 By 4, everyone's on their way home, and in the late afternoon, the streets are deserted for a few hours.

But that was yesterday and today is Shabbat. This is the only day I barely hear the news on the radio -

What is my take on Temple Mount? I always have a 'take' but not always do i have sufficient knowledge. In this case - what I know is this: Israel says they have to fix the paths to the temple. The Palestinians say that the Mosque of Omar is in danger. I doubt whether it is in physical danger, but I suspect Israel may be trying to prove that in history, this place is even holier to us than it is to them. That endangers the mosque in a different way. All this means nothing to me. The only thing I care about are the people - so I find the lack of cooperation deplorable. It can't be all that difficult to come to an agreement about something this simple.

A moment of nostalgia - before the afternoon news comes on and my stomach turns. I was making tea and my guest was paying attention to what I was doing and now what I was saying, and was shocked. That's nothing, I said. I learned it from my ex-mother-in-law, and I've lost most of the perfection of the system. She always put the tea cup under the faucet before she turned it on, measured out a cup, turned off the water and poured it into to the kettle. The process was repeated for the number of guests there were. Then the match was struck, the gas turned on, and the kettle was watched for the moment of boiling. Of course the tea bag was reused, but that was only the tip of the iceberg. This was a tiny hint of the life in Israel 90 years ago when she was young.

You didn't really expect me to react to the successful Arrow missile test, did you? A friend, Roi, complained to me that since I have been talking about it, off line, for a year, i should be very happy that it is now clear we have an answer to atomic weapons. Moreover, he reminded me, I have noted that there is a problem with using chemical or even atomic rockets around here - the winds are not always in the favor of the launcher...

None of this makes me happy. Even though the arrow is a defense weapon and may well save my life, I'd rather there not be a need for it. The Korean agreement today, if it works, is more of a reason for optimism. It's the kind of thing the whole world needs.