I did something creepy yesterday. i was sitting next to a woman in scarf and long dress and could see that she was not only feeling worried about the person undergoing the radioactive scans, but she was also generally uncomfortable in the hospital and had adopted the traditional stoic face and stance. At some point i got her to smile back and me, and then, just for fun, i put my computer between us and started watched "The Jacubian Building," the movie on youtube made from the scandalous novel by Ali Alaswani. We were both into it for a few minutes, and then i realized it was a bit racey for this woman, who had other things on her mind, and Ezi emerged suddenly, as her phone rang, so I didn't say goodbye to her, but left while her back was turned. why these things bother me is strange, but i felt unfinished for the rest of the evening. maybe she didn't even like the film, i don't know.

in the meantime, i put up the film Ezi made from my reading of my translation of Sutzkever's "Ver Vet Bleiben"

have you been watching Mouna on on channel 1? try it. Other than that there is nothing to watch on Israel TV. it is as if all remaining intelligence has been erased in recent months.

the other day was 'family day' at schools all over. it was celebrated today, ans there were all these parents running around from school to school to make it to their kids' celebrations. i think it is our equivalent to 'mothers' day' but as i keep telling you - the family mix in Tel Aviv forbids that. Mothers and mothers, fathers and mothers, mothers alone, fathers alone... There is even a guy I've been watching all year with envy - he looks like a loving grandfather and he takes care of three kids. but just the other day it was explained to me that he is no relation. Somehow years ago he got involved with this family and he's been the non-paid nanny, taking them on weekends too occasionally. He's so much better at being a grandfather than i am being a grandmother - knows his way around the neighborhood and the school so much better than i ever will.

i haven't quit the Labor party yet. i was about to, the day i met Avi Gabai, because even though i loved his speech i hated the way he answered me when i asked a question. the antipathy was that strong. now that the Labor party is falling apart, and it is clear that it is Gabbai's fault, i think i have to stick by the amazing party members in it that are left. itzik shmueli, stav shafir, meirav michaeli, nachman shai, amir peretz, and more... we'll see after who to vote for in the general election.

They promised rain so we planned to stay home with the cholent, but the day was gorgeous, and we wasted the sun.

Years ago we went on a little tour of desert vegetation with < href="http://www.karenalkalay-gut.com/diaryfebruary232007.html">Nissim Crispil, who knows more about folklore medicine than anyone I've ever met. Now I learn he's been in prison for the past 9 months. here February 11, 2019

You didn't miss me, did you? Haven't received any reponses to my diary here, so i decided to skip a day. so there.

Actually I went to vote in the Labor Primaries today. like a good girl i didn't feel invited to all the tables where they were giving everything away from skullcaps to pita, so i went right in and did my duty. voted for 10 people - one that the leader of the party was trying to wipe out, and the rest of the people who seemed to me to have the highest recognition value. the idea was to make sure the party doesn't lose more seats than it has to. my dream of a party for the people, a party with socialist values, that feels a responsibility to other, just doesn't go away. tonight when the polls are close to closing, there is a party at the central headquarters, but that's too many people all at once. i like the idea of being responsible for people in government but i don't like people much any more.

The ARC 26 came back from the printers today. A double issue, the copies were twice as heavy as last time and i have - as usualy no place to put them before they disappear. i hope in sales. 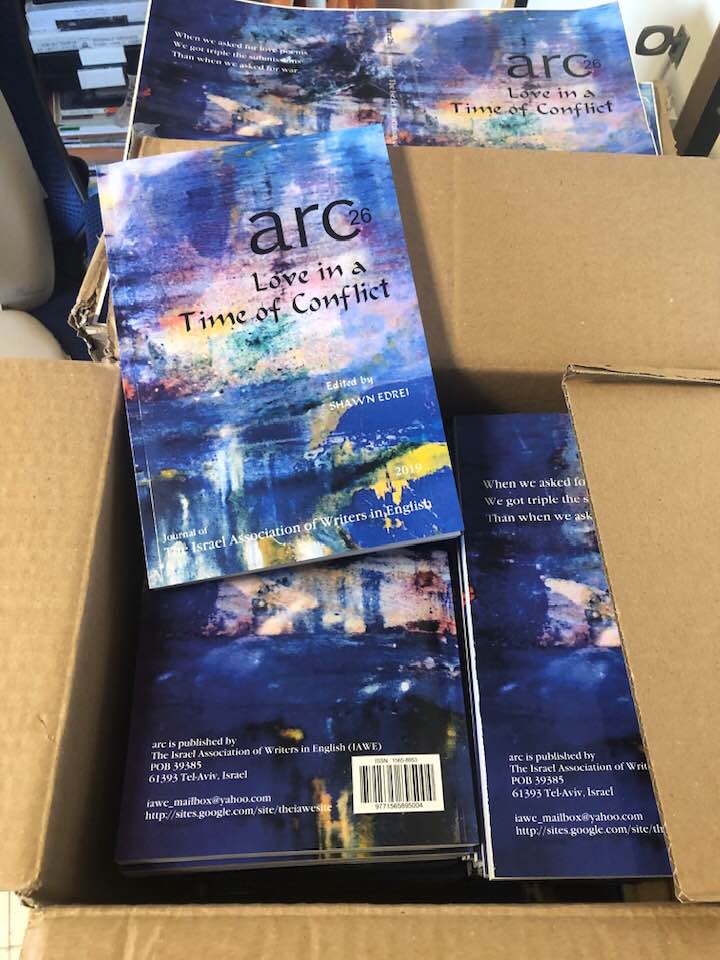 nice cover, isn't it? Raquel Sanchez did the background. Shawn Edri did the work - a double issue. We'll start distributing and selling in 2 weeks. 100 shekel plus postage. $35 +. Details to follow. i think bank transfer. I'm particularly proud of this because I spent the entire year getting the organization out of the mud, and am hoping I can get some of the 9000 shekel i have loaned the organization. It is not a very wise or generous organization at the moment, but i still believe that English language writers have a great deal to contribute to the world and that israeli society can learn much from the dialogue with us.