Because my legs are still sore we're watching documentaries all day - one on the Iraqi pilot who defected to Israel with his MI-G21, and one on the camps that they put im"migrants to Israel in the late forties-fifties called Hamaabara. Both are eye openers and turn around history. i've got to find the series on the internet for you. Here is the first chapter. Sorry - no subtitles.

Ground control to Major Tom - we've got a rocket to the moon. and, like most Israeli tourists, it will land, take a selfie, and disappear. It's not something the government supported - just remember that - even though we're taking all the credit, the money and the research and all the work was private. How can you be surprised? All our money went into building those deep walls so that attackers can't get through tunnels.

Visiting the land of israel museum today was a real eye opener. I knew, for example, that around a million Jews were evicted from Arab countries in the late 40's -50's, but i didn't know that they were allowed to carry one suitcase with them per family and nothing else. i didn't know how long the terrible conditions of transit camps went on, I didn't know the prejudice that accompanied them here. I didn't know how important Jacqueline Kahanov was, and how she was nurtured by Aharon Amir. I too was nurtured by Aharon Amir, but not with the amazing agenda.

Still under the influence of yesterday's visit to the museum. a video by i think his name is Tamir Zadok - it begins with an imitation of a painting by Delacroix of a Moroccan Jewish wedding, but one by one the participants in the wedding disappear, until there is no one left. There were two things there that struck me. All I had known of Delacroix in Morocco was that he painted Jewish women and Jewish weddings because only the jews had guests, could have Delacroix as a witness. the other was that the Jews of Morocco, having left the lives with only one suitcase, lost their heritage when they came to Israel.

i once translated a piece of the Syrian poet Ghadda AlSamman that I found on facebook about refugees:

And our loved ones migrated

Filming poets this afternoon. one example from last month:

today i concentrated on the poets who have not been documented for many years, and whose stories have not been told. It's too late for so many 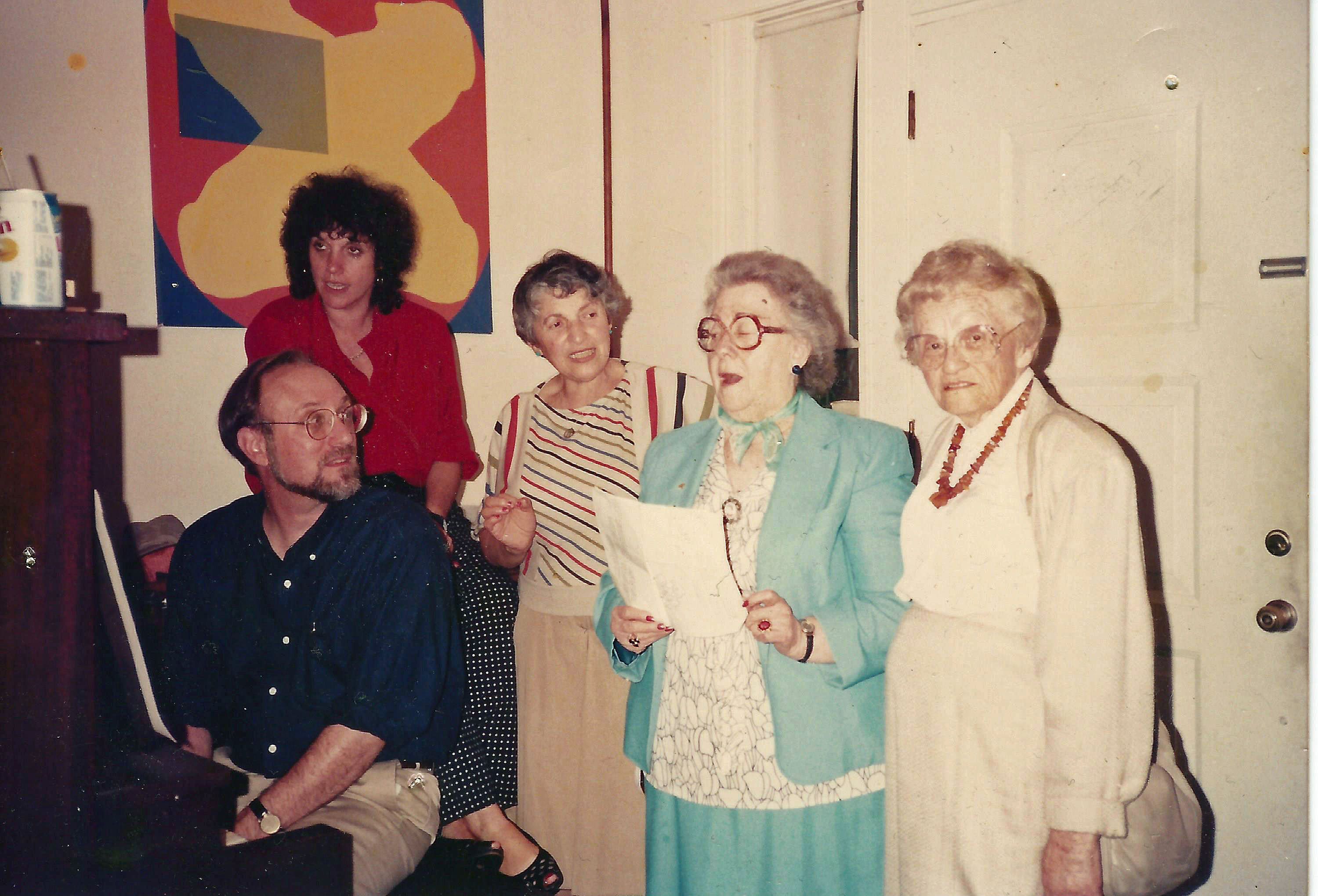 This was the first time Frieda and Hasia met. Frieda came to see us at my brother's house and I used the opportunity to ask her questions about her past. She was such a joyful person it was always a pleasure to hear her and her rolling laughter. She was never able to tell a complete saucy joke because she was always in paroxyms of laughter before she got to the punch line. But then she got to the part about how her family had moved to England when she was a little girl, but when the war (WWI) began they went back to Lida. She was confronted by many hardships of war and began to remember them as she spoke. "We were hungry," she said. And then she began to weep. "We were so hungry we ate bread made of potato peels!" At that moment Hasia walked in. "We were just talking about the first war in Lida," I said as I introduced them. "I don't remember much about that war, said Hasia, "I was too small. I just remember there was this amazing bread they made from potato peels..." Then Allen and his mother came and we crowded around the piano to sing old Yiddish songs, Frieda with great enthusiasm and Hasia and me with failed attempts to stay on the melody. Lilian wasn't as into the songs, probably because we were so off key she didn't recognize them.

Ben Yehuda Street. Today. Mersand Cafe. Elinor and I had coffee in this landmark of German pastries, and i coud not help but think of all the histories I had heard about this wonderful cafe on the corner of Frishman Street. From fifties years back and from last week. But I was too interested in the here and now to be nostalgic. After, I went to see what the tourists were seeing and buying on that street. It turns out - nothing. Half the stores are for rent and the others are old jewelry that my drawers are full of. one store had clothes and a big sign that it was going out of business. i bought a sweater, just to be kind.