A long day of grandchildren ended with the minimarathon in Sarona. Thousands of children too young to run the real marathon, from the age of five, ran five hundred meters in a series of age-appropriate groups. After 50 years of teaching i usually know how to count large numbers of people at a single glance, but the movement here and the white marathon t-shirt uniform was too much for me.

When have I spent an evening at the opera? Don Giovanni - three glorious hours about lies and betrayal. Something from our everyday news

I once did a recording with Ziv Yonatan about Lies. It comes back to me now.

It's more and more true.

"What will I do with all these photographs?" Ezi's mother's cousin asked us at the Home today. "Will you take some?" They were pretty amazing photographs, like this one of her parents' honeymoon: 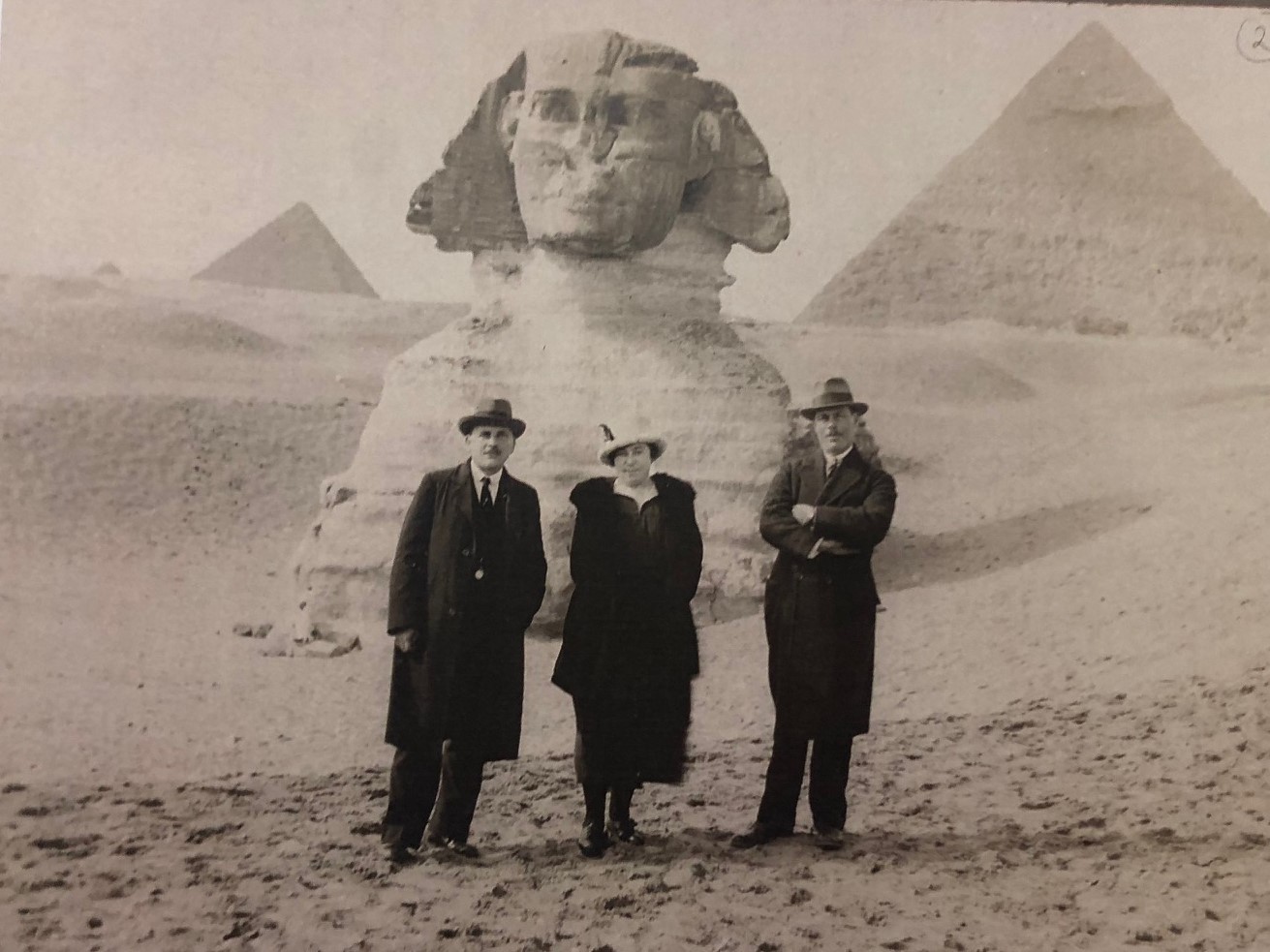 The one with his arms folded is Ezi's great uncle. No one knows who the other man was.

It was common to go to Egypt for honeymoon. I can't remember if Ezi's parents went to Damascus or Cairo for that occasion. they went to both places for sure - Damascus by motorcycle. Must have been a great ride.

In any case our visit of reminiscences kept us from the television where the news grows more grim by the day. We should be happy that all these tycoons have finally been caught. But Ulysses' speech in Troilus and Cressida weighs on me. I could have just used the Hebrew expression, "A fish stinks from the head down." but Shakespeare says it better:

Troy, yet upon his basis, had been down,
And the great Hector's sword had lack'd a master,
But for these instances.
The specialty of rule hath been neglected:
And, look, how many Grecian tents do stand
Hollow upon this plain, so many hollow factions.
When that the general is not like the hive
To whom the foragers shall all repair,
What honey is expected? Degree being vizarded,
The unworthiest shows as fairly in the mask.
The heavens themselves, the planets and this centre
Observe degree, priority and place,
Insisture, course, p
roportion, season, form,
Office and custom, in all line of order;
And therefore is the glorious planet Sol
In noble eminence enthroned and sphered
Amidst the other; whose medicinable eye
Corrects t
he ill aspects of planets evil,
And posts, like the commandment of a king,
Sans cheque to good and bad: but when the planets
In evil mixture to disorder wander,
What plagues and what portents! what mutiny!
What raging of the sea! shaking of earth!
Commotion in the winds! frights, changes, horrors,
Divert and crack, rend and deracinate
The unity and married calm of states
Quite from their fixure! O, when degree is shaked,
Which is the ladder to all high designs,
Then enterprise is sick! How could communities,
Degrees in schools and brotherhoods in cities,
Peaceful commerce from dividable shores,
The primogenitive and due of birth,
Prerogative of age, crowns, sceptres, laurels,
But by degree, stand in authentic place?
Take but degree away, untune that string,
And, hark, what discord follows! each thing meets
In mere oppugnancy: the bounded waters
Should lift their bosoms higher than the shores
And make a sop of all this solid globe:
Strength should be lord of imbecility,
And the rude son should strike his father dead:
Force should be right; or rather, right and wrong,
Between whose endless jar justice resides,
Should lose their names, and so should justice too.
Then every thing includes itself in power,
Power into will, will into appetite;
And appetite, an universal wolf,
So doubly seconded with will and power,
Must make perforce an universal prey,
And last eat up himself.

you probably don't believe in the great chain of being, but you know what is happening to this world and why.

Let me know if you want explanations about this. The basic idea is that when the establishment is fuzzy, everything gets fuzzy.

the program is not ready yet but please save the date for the yiddish/hebrew/english launch of the book about inheritance.

Should Bibi step aside? people seem to have very solid opinions about this issue. unfortunately they are antithetical.

Purim has begun. At least in our hearts. The concert was Dukas, "La Peri," Prokofiev, and Stravinsky's Petrushka. Now anyone who knows me well knows my passion for Nijinsky - and he danced Petrushka and was supposed to dance La Peri but was fired for getting married - as I recall. So the whole concert was about masks and plays.

So good for us to recall stories of vain kings who get straightened out by good Jewish women now in these crazy times. I hope I will recover from my dental implant replacement tomorrow enough to be able to hear the megillah in yiddish at the central bus station on tuesday. pleasure in the cloaca of tel aviv is very appropriate for these decadent times.