Half of what we said at lunch today was inaudible. the noise. the noise. Happy Birthday in Arabic. Happy birthday in English. "Shuftigezen?" "Did you see that?" a woman asked her friend, as we picked up our things and tried to move to a quieter part of the restaurant porch. "That's the Yiddish-Arabic from Tsfat," says Sasson. "Shufti =arabic, have you, and gesein = yiddish, seen." And for the rest of the meal we kept going back and forth in our discussion about going from Hebrew to English to Yiddish to Arabic. The cellular phone became in hebrew "pelephone," since "pele" is miracle in Hebrew and "phone" is phone in English. This became "belephone" in local Arabic, and so remains, even though we now say "sellyoulari" for cellular in Hebrew. We even reminisced about Shaike Ofir's English Teacher who tells the story of Hamlet in English with perfect Arabic grammar.

And together we mourned that Arabic is not a preferred language in Israel. Of course why should anyone wish to learn a language that doesn't raise one's status like English or French... We try to think of ourselves as western, not oriental.

I put the date on the page and then think - why should i write about today when tomorrow might be different. Maybe tomorrow the murders will be solved, maybe the prison guard whose life is in danger will be saved. maybe Ukraine will become democratic (ha ha). Anyway, by noon the headlines of the morning paper are obsolete.

We were in the jungle of tall office buildings in Ramat Gan this morning. I always think of that place as one similar to Manhattan, where the sun doesn't shine. But today, which was particularly foggy, I looked out of the window and everything looked lovely. 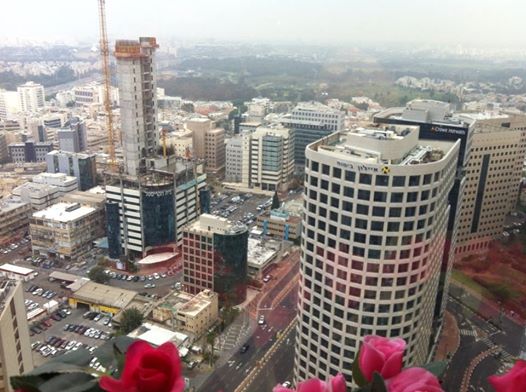 It's not my rose colored glasses. it's the roses in the glass that make everything pink.

Because my grandson's kindergarten teacher is sick, I knew there was a substitute, but before I saw Omer showed me his drawings for the day - he was learning letters. That in itself is not surprising - there was a religious Jewish woman the last time the teacher was sick who taught the kids to recognize their names. But when I saw the teacher - a religious Arab woman - I was really overwhelmed. She is my age, I think, wearing traditional dress as well as a hijab, and we walked together a way while she told me her story. "The children must learn their language," she said, and told me she had been a teacher in an English school in Jaffa for many years and the children learned English and Hebrew but only knew spoken Arabic, and no literary Arabic. "It is tragic when you cannot learn your culture," she said. I cannot agree more.