In the middle of all our quest to get Ezi treatment for his indolent cancer that got very hectic this morning, we found ourselves in the middle of a completely different story - the memories of Tel Aviv in the fifties.- Ezi's aunt and uncle lived in the same building as his parents then and they seem to have lived a life of great depth and joy. Hadassah Beer, who was then married to Ezi's uncle, was buried today in Savyon, and stories about her kept rushing into my thoughts all day. Then in the evening we met with some old friends from Ezi's youth and we talked about her again, and that whole period of extraordinary people. I think the kind of mix of people and cultures of the sixties was truly unique. The first generation of survivors, their children, their missions, will never come together again like that.

I was even more influenced by that period today because I saw the film, "The Debt," last night which is about Nazi hunters in the sixties.

A day at the Knesset.

This is the third time in the past year I think that I've had business in the Knesset, and I am pretty sure that there are far fewer lobbyists (the ones with big hats and black suits). What has happened? Not that we are not becoming more professional, surely?

Anyway we went because of the attempt to propose a law promoting poetry in Israel. By the time I found out about these efforts the bill had already been fixed to include only Hebrew poetry so there wasn't much I could do about that (not at the moment anyway) but the idea of promoting poetry is so appealing to me that I can't resist. Simple. So we went through the wording of one aspect of the bill - a little list of rules - word by word and I learned an enormous amount about how bills are constructed. Knowing how I will not be eligible for any of the benefits we are proposing. Foolish? Perhaps.

And even more foolish - I will be going again next week. 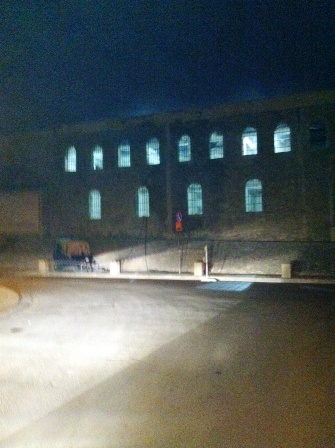 I know it isn't impressive now, but this jail is the first site I ever saw in Israel. The first morning I was here my cousin Nachum took me by bus to Jaffa. We got off the bus and faced the police station. I was incredibly impressed by the exotic Turkish building, and by the fact that they used to hang people from the government building opposite.

But now, we were with another cousin, Gideon, and just ate wonderful food as he compared the cuisine here favorably with anything he'd eaten in Nablus or Oum El Fahm.

I can't remember what I ate yesterday much less what I ate in Nablus.

Hello Iran! I understand there are many people in your country who have devoted their lives to destroy Israel. If this is the case, I wish you'd get moving already because the suspense is killing us.

Well not really. We seem to be masters of denial, and although we have much to deny, manage very well to enjoy ourselves. I myself do it extremely adroitly - while keeping reality before me all the time. It is like dancing a gavotte while having a conversation with your partner. you ignore what your feet are doing.

Got defriended today on facebook. A guy who wrote me long ago to be a friend and with whom I've corresponded here and there named Ghassan Abu Gush sent me a note asking why all Jews kill Arab children. My answer was immediate - that I actually teach teachers, including Arab teachers, to teach Arab children. That's when he told me that he blocked me. It was a big blow - I thought we would open a discussion. But he'll never write me again, and if we do meet it will be at the end of a gun. And guess who will be on what end.

Maybe I should have asked him who killed more children, Bibi or Assad?

But I really don't care who got the better of the facebook correspondence. I do care that we will never communicate. If you read this, Ghassan, know I miss you.