When the historian Har Segor was asked about the his chess game, and what he would do if he lost his king, he said "I'd just declare a republic and keep playing." I kind of feel that now.

So we had a rocket up north today. So what's one more?

Michal Sapir, who I've written about before, had an article in Haaretz about her last week, which came out today in translation . Michal, the granddaughter of Pinchas Sapir who created the economy (that was pretty much destroyed by Bibi), lives in England now because it hurts her less. Me, I stay here because even though it hurts, it's my hurt.

So even though the king is dead, I'm declaring this a republic and keep playing.

Another classic review of Pappa's today in The Town Mouse today. It's in Hebrew but the jist of it is that if you had lunch at Pappa's you'd be a happier person. Me with my swollen jaw and black eye will have to wait a few more days, but I aim to have meatballs and spaghetti as soon as possible.

Mira Awad and Achinoam Nini are pretty amazing performers. I've never seen them together but they are going to the Eurovision contest together. That should be something. Mira Awad is so profound and Achinoam so spirity the contrast will be fantastic. But protests against Israeli participation may alter that plan. I'm hoping respect for democracy wins out but it looks like all of Europe is becoming fascist, especially the left.

And just to put things into perspective. Today in 1942, the bodies of Stefan Zweig and his wife were discovered. I think about a Jewish writer in exile in Brazil, his library burned in Salzburg, his books and libretto banned, his reputation gone, and who knows what wonderful works he may have composed, like Yeats, in the two decades remaining to him?

My cleaning lady got a job offer from Sarale and almost accepted. I would have been devastated probably, because I have no strength to clean the house myself, but would have waited because there is no way to last in that household. I'd say a month tops.

I wrote a whole shtik this morning about the time my cleaning lady worked for the minister of finance and erased it without saving. This is part of my pennicillin reaction i think.

Okay, you academics, time to decide if you believe in boycotting Israeli scholars or want to join a number of Nobel prize winners in signing a petition against the boycott.

I may still look like I have a jawbreaker between my eye and my mouth, but I braved the world today and ran errands after I got some of my stitches out. First I went to my investment counsellor at the bank. "Do you sleep nights?" I asked him (this is a way to get attention off my face but it is also related to some conversations I had with insomniac investment people in New York.) "Yeh, yeh," he said, "We're all on drugs here."

Then I went home to watch the swearing-in of the new knesset, that began with a lovely, characteristic, hopeful speech of Shimon Peres, and continued with the new temporary chair, Michael Eitan. Both of them spoke of optimism, peace, and equality (and the constitution). I still find it amazing that every one of the 130 members swore fidelity to the state, even though not everyone sang the Hatikva.

Of course this wonderful spirit will be forgotten tomorrow.

We managed to get out last night because of my enormous desire to see the Berlin Ensemble perform "The Threepenny Opera" at the Cameri Theater. The beautifully decadent, professional, and parodically German performance was worth the pains in my cheek afterward from the effort. To see the autistic goose-step movements, to hear the money tinkling as it moved from hand to hand, feel the absence of any emotion except greed and to know the basic inhumanity that is the sum of it all, is to return to 1928 between the wars, when the play was first performed, and to be in the absolute present at the same time.

The entire idea of seeing the dreigroschenoper in version of the Berlin theater was amazing to me because I eat breakfast every day looking at the portrait of the man who sang the opening song on opening night of Brecht's opera, a jew who became a star before he ended his life in Auschwitz. 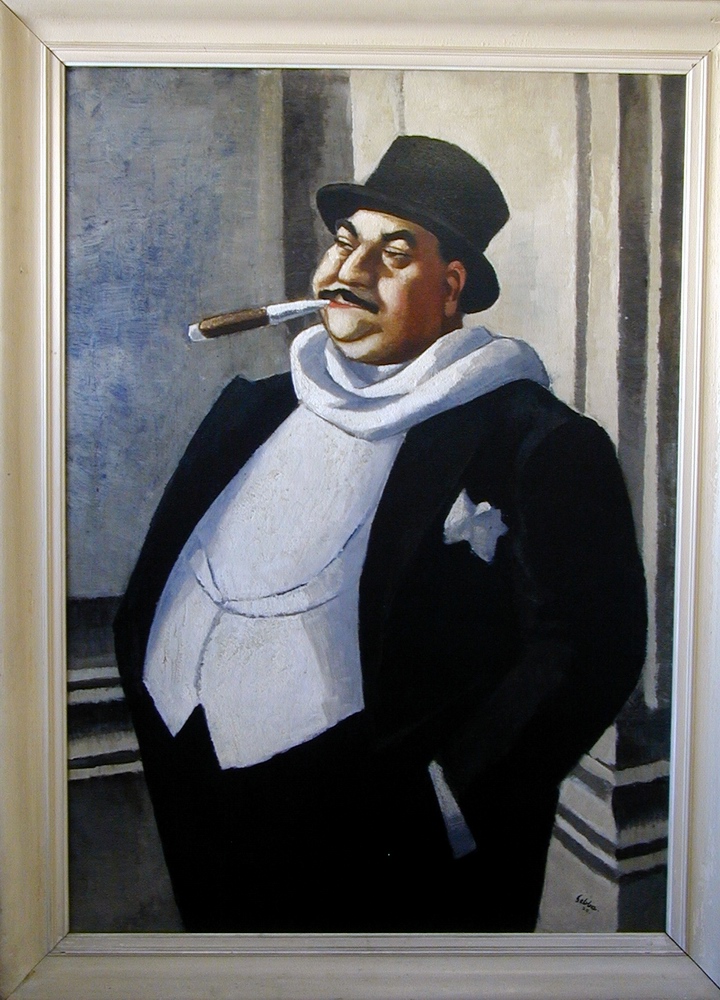 Kurt Gerron was given the song "Mac the Knife" to emphasize the greasiness of the "hero," to contrast with the slick surface handsomeness of MacHeath, and show the fat,ugly surfeit and gluttony that underlies society. Unlike MacHeath, Gerron wasn't pardoned at the end, even though he got down on his knees and reminded the commandant of the promise to spare him if he completed a Nazi propaganda film about Thereisanstat.

On March 26, Panic Ensemble and I host six major Israeli poets at City Hall - Mercaz Einav. I think this will be well worth seeing. Let me know if you're going, and tell me what to wear...