Two strange and chance conversations today - an older taxi driver on the way to Jerusalem and a young Arab woman over coffee - about the impossibilities of stable relationships - The taxi driver had been left by his wife 5 years ago and now sees no reason to stick with one woman now that he already has a family. The Arab woman complains that once she gets married, she won't be able to have a career worth speaking of. Both of them said, we need an alternative system.

Tonight in the Tel Aviv library there will be an evening celebrating Arieh Stav's many volumes of poetry translations from many different languages. I'm supposed to talk about canon stuff. After that I'm going to join Roy Yarkoni and Ronen Shapira at Hed to read some crazy poems. So I don't have much time to fool around, but I will stop to have dinner at Nona and hope I have the energy for dessert at Mishmish. And I hope this is the end of my public activities for a while. I want to be able to help in the peace movement a little more actively.

So there was this evening in the library talking of the amazing translations of Arieh Sivan's 7 volume collection of what best of literature and the greatness if eureopean vcultures, English,etc. From there we found ourselves at nighthawks in hed where i performed a few poems with Ronen, the antithesis of the elitist and canonic concept.Both concepts and both societies exist side by side.

No that's all a false dichotomy. in the wildest rock today are canonic poems - last night were poems by Hezi Laskali, Celia Dropkin, Yona Wollach, Rony Sommek - the classics of Hebrew Literature. And that was in the rock club. The elegant evening in the library focussed on Celan, Goethe, Stevens, and so on. Me, I was rebellious and talked about Yeats' "Politics," that begins with a quote from Thomas Mann 'In our time the destiny of man presents its meaning in political terms.'
How can I, that girl standing there,
My attention fix
On Roman or on Russian
Or on Spanish politics?
Yet here's a travelled man that knows
What he talks about,
And there's a politician
That has read and thought,
And maybe what they say is true
Of war and war's alarms,
But O that I were young again
And held her in my arms!


Then at the progressive rock evening i read a poem about politics:

The moment before he blew himself
and Dizengoff up, he paused
in the middle of the street
and I imagine that his mind
filled with endless desire—
Paradise, Dizengoff, the thirst
he must have felt after a long day’s ride
in the bottom of the van, a girl he once saw
and wanted to have, a self-portrait in oil
that showed promise and could have been
so much better, Paradise, Dizengoff

So i contradicted myself - but no one but me was in both places that evening.

As you can see I wrote through the night last night. So yesterday's entry is today's too - rethinking yesterday.

But today too promises to be good -

And so it was, but I couldn't get into my site to talk about it and have now forgotten details. But they moved from the sun-drenched cafe at the entrance at the university to the dark romantic caverns of Dr. Shakshuka, listed as one of the ten best restaurants in Israel. I had in my head the list of names of the tunisian dishes at Dr. Shakshuka, and the people were so nice there that I would love to be able to recommend each and every one of them. On the other hand we seem to be suffering from strange belly-aches that may or may not be related to the food. We had started off in a delicate situation so Dr. Shakshuka may well not be at fault, and i will check with the other diners and report back. One of the other diners was the returning immigrant, poet Ed Codish. I am eagerly looking forward to his return. There are too few of us. I will also check with poet Schulamit Hava HaLevi whose restaurant expertise brought us there. I'm pretty sure that it is just that Ezi and me started off in a delicate state. (P.S. It was just Ezi. Dr. Shakshuka did not make anyone sick. And I always have a stomach ache.)

The brutal murder of the Jewish young man <"http://www.haaretz.com/hasen/pages/ShArtVty.jhtml?sw=eitan+halimi&itemNo=685146">Ilan Halimi in Paris keeps frightening me again and again. Last summer in Paris I smelled this fear and could not understand what Jews were doing there. In my diary I managed to write a few words, but there was much more I dared not write.You can see it, however, in my eyes, as Ezi took my picture in the Pletzl. 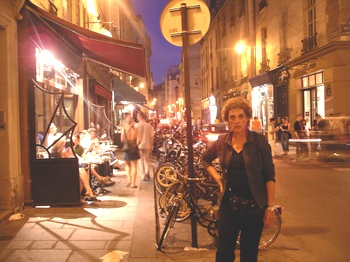 somehow a really scary place with all its signs commemorating the murdered people of world war ii.

I was thinking of what it is like to live in a city where the others do not want you around while i rode around Tel Aviv today - I had Oren's Smart convertible and it was a sun-drenched day and everyone was talking to me about the car as if they were relatives - interfering relatives. "Such a sweet car - why don't you wash it?" "a little small for you, dear - why don't you trade with me?" "How much did you pay for it?"

One celebration and two disappointments. The celebration was for Rivka Bassman's birthday. Rivka is a wonderful Yiddish poet who also gives a great deal of her time to help out with the Yiddish Writers Organization and received well-deserved accolades from her peers today at Beit Leyvik. I've translated a poem of hers and will try to put it online later. But she is a true role model for me.

The first disappointment was a meeting - at Cassit Cafe. Told to go to Cassit, I went without thinking to Dizengoff and Frishman. And couldn't find it Even though I knew it had been remodeled and all the historical fresco of the writers who had frequented the place removed, i didn't think it would be unrecognizable. But it was. And visually totally identical with every boring cafe anywhere else in the world. And it's called something else. I only found it because I recognized my friends waiting there.And the soup was bad and had a hair in it.

Beta Cafe has long been a favorite of ours, and now that Anat Leibowitz, the local TV chef, is in charge, I thought it would also be even better. But it was awful - theoretically creative and boring and tasteless in practice. Ezi for example had quinoa, an ancient and very in grain. But like rice it needs something to give it taste, and there wasn't much there. The only tasty dish was the baby's shnitzel. I vowed never to watch another program of hers, and certainly not to rely on that cafe again.

But the weather is what made the day - a perfect summer afternoon.