The international Book Fair in Jerusalem opened. The English writers have a booth thanks to Irwin Holtzman: 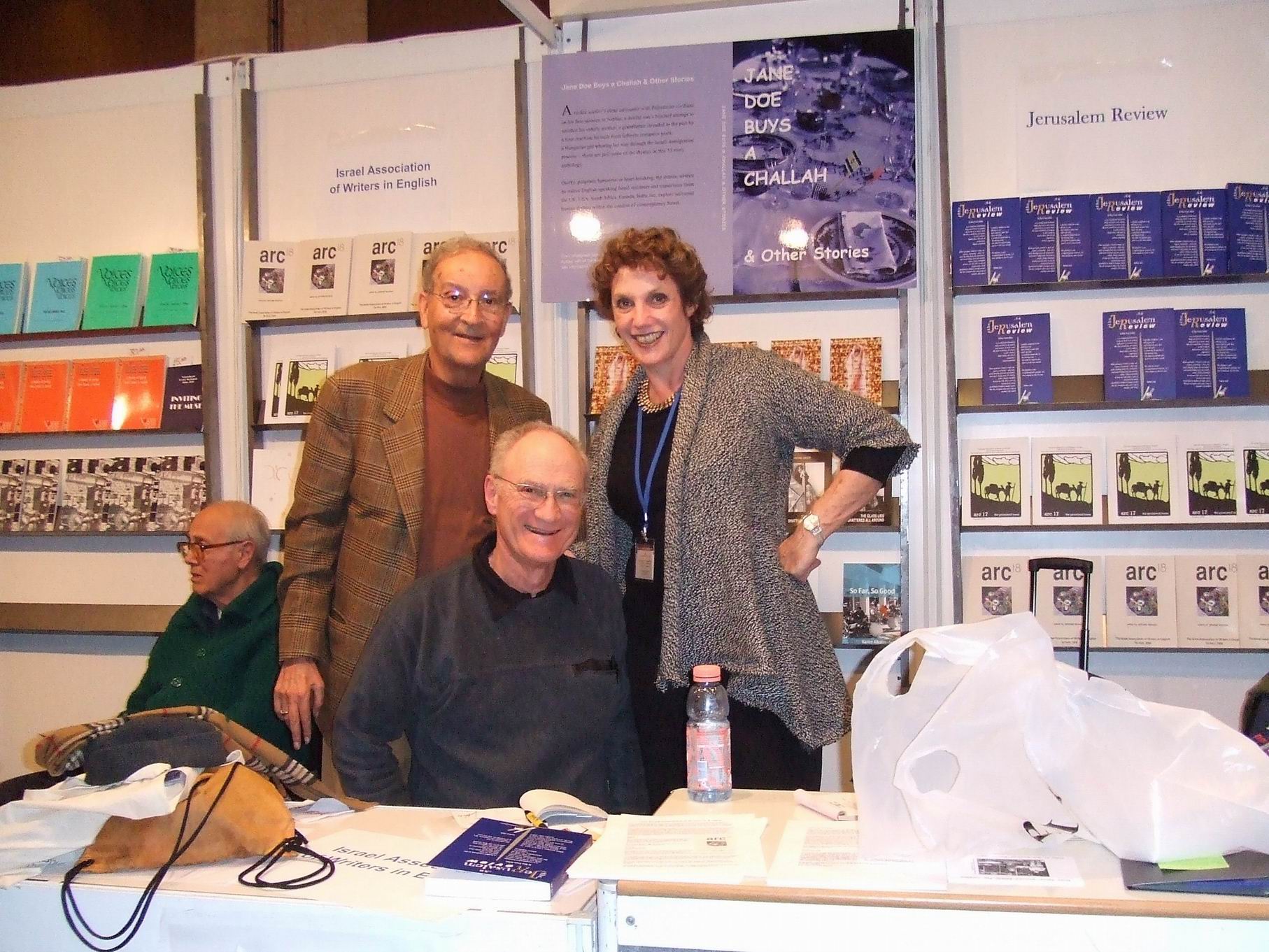 And the new Jerusalem Review is also being sold there. 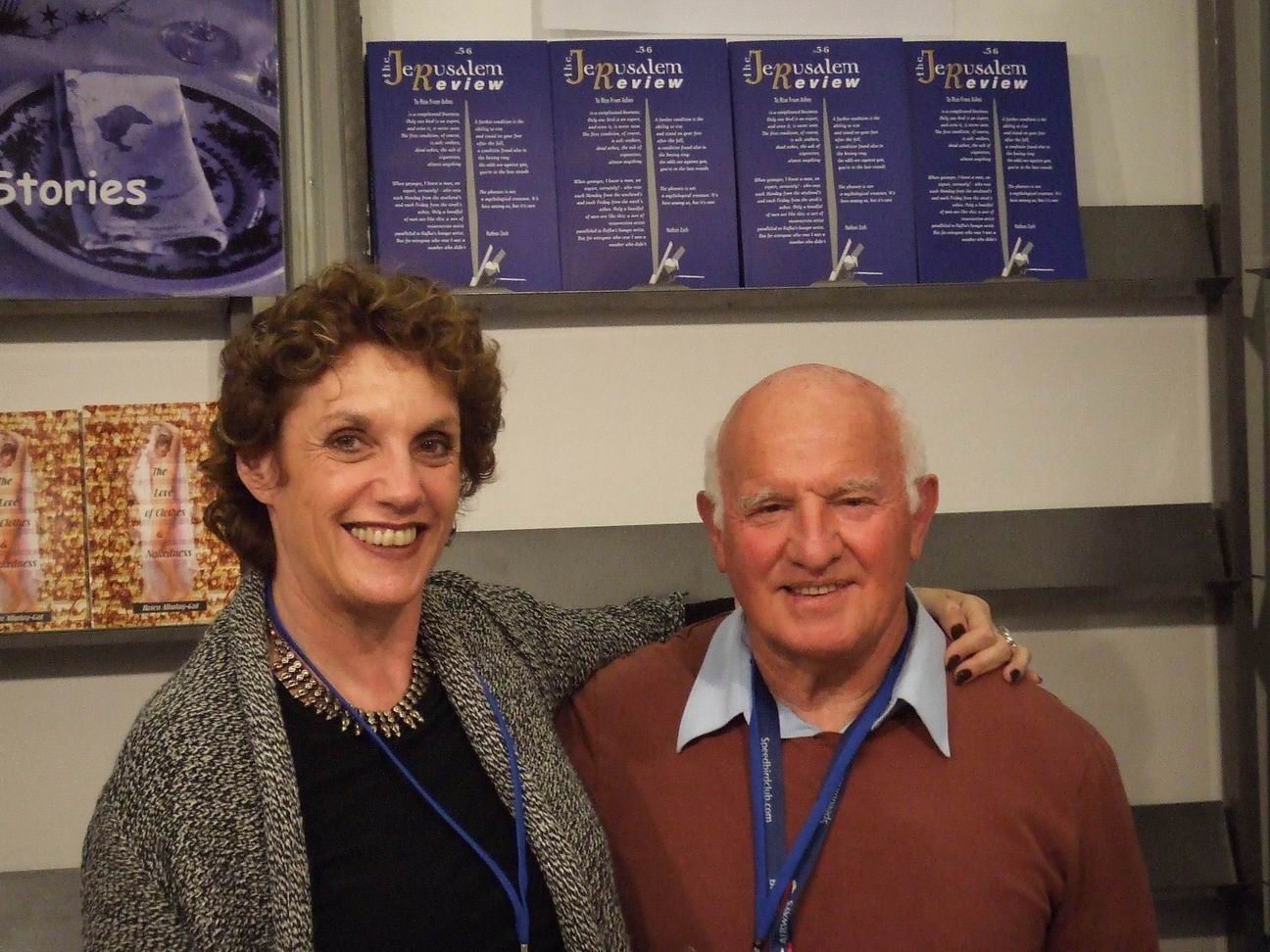 sorry about the size. i can't get anything right on either site nowadays.

The book fair is a very big event for us, and while i was manning the booth i heard all kinds of press conferences and parties around us. But when I wandered around, i didn't see much. I guess I wasn't focussed but I also have this powerful memory of one of my favorite books - Johnson's Lives of the Poets. Johnson didn't think much of the depth of William Shenstone, and in his delicate way, shows it in a delicate biographical sketch: "He learned to read of an old dame... and soon received such delight from books, that he was always calling for fresh entertainment, and expected that when any of the family went to market a new book should be brought him, which when it came, was in fondness carried to bed and laid by him. It is said, that when his request had been neglected, his mother wrapped up a piece of wood of the same form, and pacified him for the night."

I still roll around the floor with laughter when I recall that anecdote. And I couldn't find it anywhere on the web.

But it reminded me of the danger of a book fair like this. On the one hand there are amazing people to meet in the book industry (I of course hid in my booth) and amazing books to be seen. But one shouldn't get confused. Books can only been respected and love by reading.

Don't tell anyone, but I escaped from working to an afternoon at Nona. I'm going to miss this place so much in the spring. That's when they tear up the street and sidewalk, and for a sidewalk cafe that's a bummer. Even though I rarely sit on the sidewalk. I prefer to sit inside by the window and watch the people outside.

Today we had stuff not yet on the menu - i had liver and potatoes and Sharon had the chicken curry. It was as good as their lasagna - which means a lot if you've been following my love affair with food.

Why are they digging up all of Ibn Gvirol? To put the light train in. Not to get under Al Aksa.

Of course by the time that train gets going I'll be in a wheelchair and won't need it.

It's perfect weather for the beach. The sciatica i thought I had under control took me over, so i won't be going to the book fair or the Holtzman reception in Jerusalem, but a little walking on the sand might be the perfect thing. I really want to get be okay for the trip we're taking on Saturday to learn about the Beduin life. My ignorance, the conflicting facts -- this kind of trip is essential.

Didn't make it to the beach either.

Coming out of the opera, we face a man playing "Moscow Nights" on the sidewalk. Tonight we were on our way to see "Tales of Hoffman" which takes you into another world entirely, and we were late because of the traffic because of a suicide bomber in the neighborhood. The combination was unbelievable.

Suicide bomber - ultimately nothing happened. The guy was caught, the bomb had a technical problem, and all we had were traffic jams and, and one friend noted, diarrhea.

It is not that we are inured to the suffering of the Paleatinians. Although I wouldn't be surprised if many people around here don't want to hear. After all, we need to survive - physically and emotionally.

"We are a people tending toward democracy at the level of hope; onanother level, the economy of the nation, the empire of business within the republic, both include in their basic premise the concept of perpetual warfare. It is the history of the idea of war tht is beneath our other histories...But Around and under and above it is another reality...This history is the history of possibility."This is Muriel Ruykeser on American poetry.

So Boogie Herzog is the new Minister of Welfare. I want to praise him for daring to take a job so 'challenging' no one else dared to come near it, but i have a joke in my mind and have to get it out. When he was minister of tourism there was no tourism so maybe now there will be no welfare. But he one-upped me - changed the name of the office to something more positive.

I keep thinking that I shouldn't write about my friends. And I try not to. The friends with so much money they have given up trying to show it off, and the friends with no jobs, no prospects, enormous debts and not enough money to buy the sleeping pills they need. The friends who believe that we have to move all the jews together and all the arabs on the other side of a wall and the friends who talk only of one state. The friends who have lost all sense of belonging here and are living happily in the slums of NY and the friends who wouldn't leave despite tempting offers abroad. I know they won't read these pages, but I feel I'd be betraying their privacy if i tell what they say - unless i ask them first. But today a friend gave me her approval to use whatever I'd like and I'm too outraged to quote her. What different does it make what she said - opinions here from all sides are outrageous.