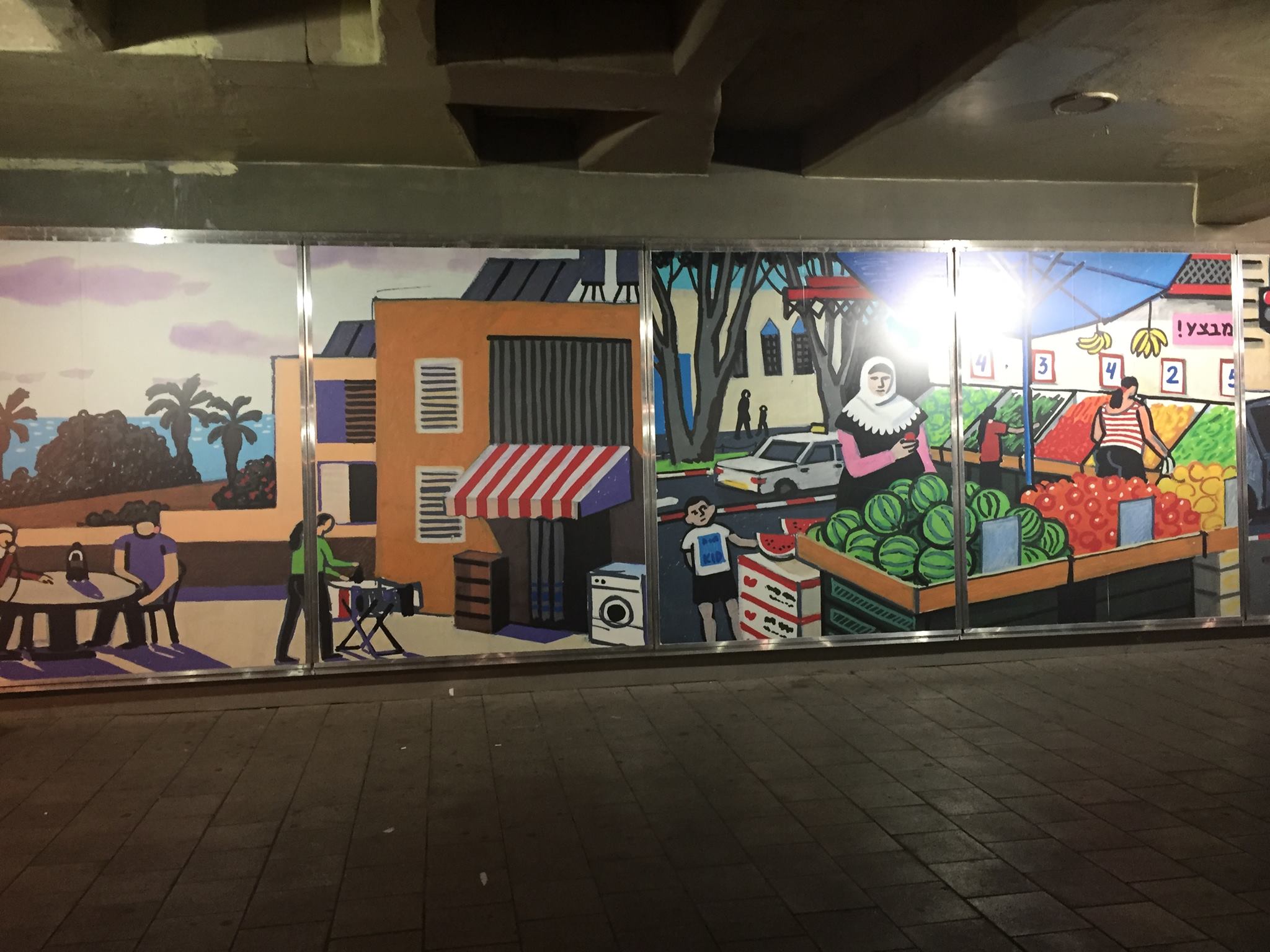 Zoya Cherkaissky's mural on.the Tel Aviv municipality. It's entitled "The Wall" - The murals show some of the people and places in the city, and the divisions between the populations. From Ibn Gvirol Street, the scenes move from strolling down avenues, to the beach, and slowly to the market, to Jaffa. It is a remarkable vista of the city. We were walking back from the Brasserie to the parking lot at city hall, feeling a little down about the situation in the country, and then we saw Zoya who paints murals revealing the truth of the society and its divisions but the people are all the same size, all absorbed in their lives, all simple people.

Lovely lovely work. Throwing back reality in our faces.

Apropos reality, i've been thinking about two issues - the presidential race and the proposed gambling in eilat. I want to make it perfectly clear that if they vote for gambling in Eilat I will never go down there again.

As for the presidential race, i want to vote for Bernie, but i think he has to grow up a little. If he doesn't make it to the presidency maybe he'll consider a job as prime minister here. So as Arie Kruglansky says, if Sanders and Trump are fulfilling infantile wishes for superheroes and superpowers within us, I'm going for Hillary.

And that will leave Bernie for us.

Thursday at seven there will be a tri-lingual poetry reading at the Yiddish Writers' Home. Beit Leyvick, at 7:00 p.m. I'm cohosting it with Daniel Galay. 30 Dov Hoz Street.

How mortifying. someone locked the door of the hall and people who came later were left outside. i only found out when i turned on my phone when i left the reading. a thousand pardons. My partner in this venture was worse than me.

But in my mind the whole evening was pretty amazing. Yiddish, Hebrew, English, and then French and Arabic.

now i just discovered that someone really made off with the keys to the building too! What a mess!

This has been a day of cat fights. i never saw anything like it. We went to see a play at the Cameri theater, and made it to the parking lot in good time, but found ourselves stuck there because two women blocked traffic in arguing over a parking space. We watched them cursing each other, even after one had managed to stongarm her way into the space. It was past curtain time and we were still blocked, and that's when we started hearing screams and I think blows. We got out of the crowded lot half an hour later and headed homeward. At that point i managed to convince Ezi to buy shoes, so we stopped at the local mall, found a place to park on the roof and took the 12 person elevator down. On the first floor down four other people entered, then a woman in a wheelchair was wheeled in, and after her a baby carriage guided by the parents of a new baby. As the doors were closing two ladies in gym clothes pulled them open and squeezed in. Because the elevator was by now quite crowded the father of the baby began to fear for his child and suggested the ladies take care. They saw this as an insult and responded with great indignation. The mother entered the fray and even though we had only descended one floor together the atmosphere of Friday afternoon was lost. Still, we bought shoes (I seem to always get myself a pair when I go with Ezi shoe-shopping) and were on our way to have lunch together with the grandchildren when I stopped to get a t-shirt at Fox. The long line should have put me off but i really wanted a white t-shirt so i could print on it "Does this shirt make me look fat?"so i stood there. And the two women in front of me began to argue about their place in the line. The salesman folded his hands and said, "work it out, I'll wait." And they realized that no one would get served so the gentler woman gave in. I asked the cashier, does this happen often? he answered, "No big deal. It's Friday afternoon, everything is closing soon, people are tense. But it works out." he was a very cool guy, and it made me wonder whether i'm just overdoing my reaction to this aggression. But I don't think so.

All this wants to make me clown - a bit of desperation, a bit of release. Fiddling on facebook

There are still places to escape around here. A field just a bit north of our place - just past the strip mall - full of wild flowers and bees and butterflies. Idyllic. The kids walked with us along the long path that circles the field. The storm predicted didn't materialize and it seemed like a dream. 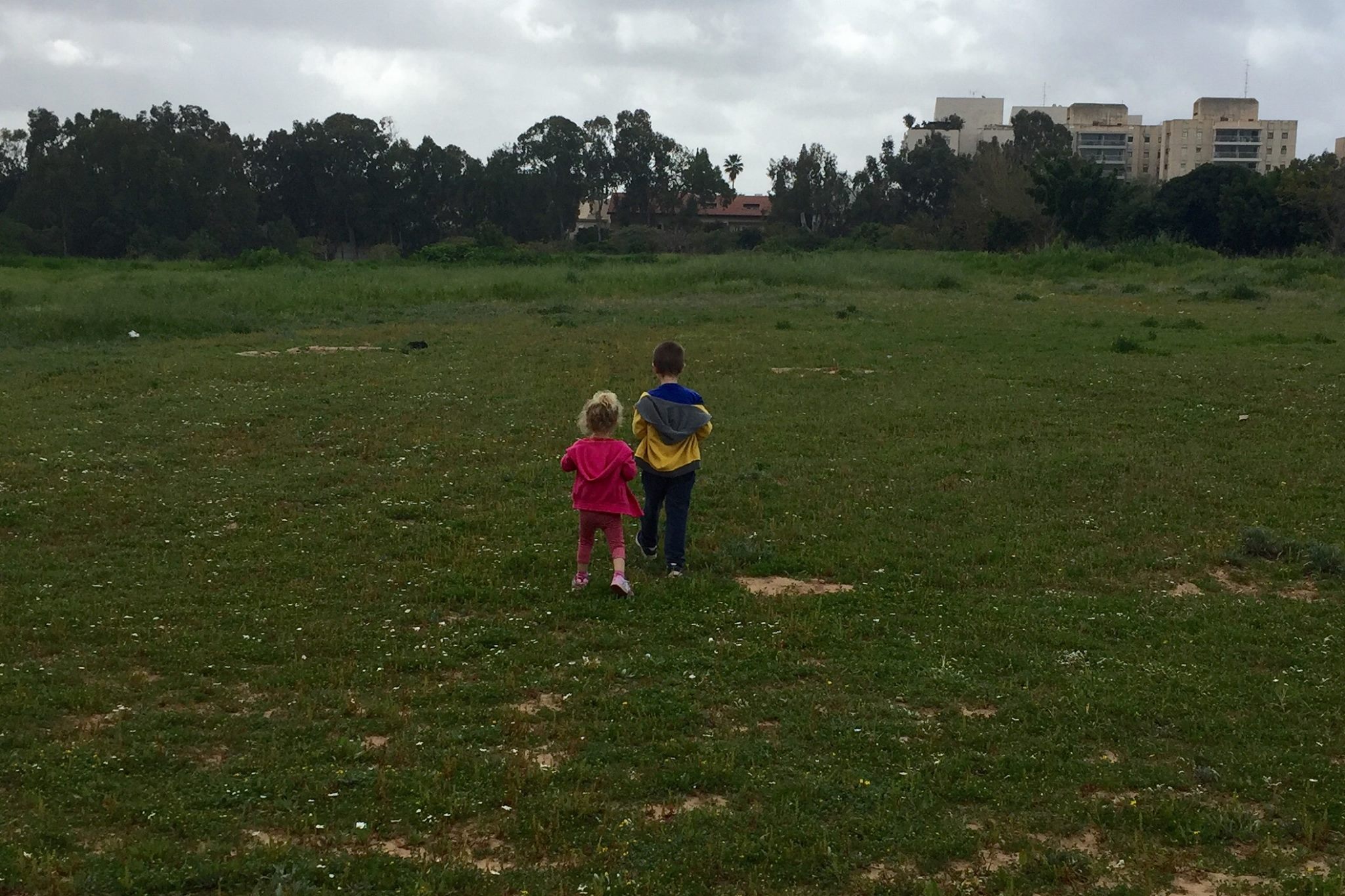 After a snack at the cafe we went to a playground where the little kids tried to climb up a jungle gym but were stopped by two kids with a big stick. 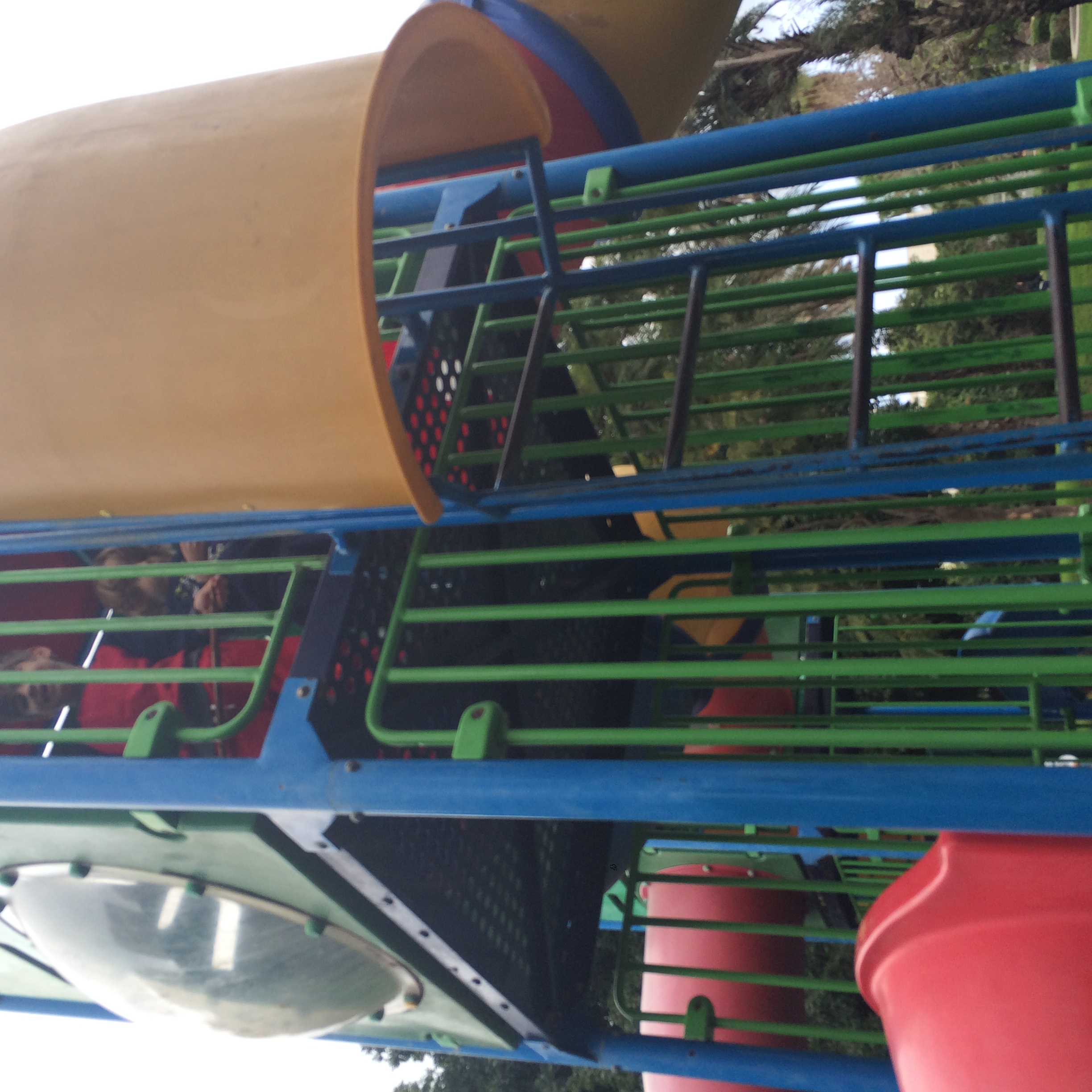 Talking to them did nothing, nor did threats to report them. I told them i was taking a picture and they thought that was funny. I asked them who was with them and they told me. They told me where they were sitting, and I ratted on them. The father came and talked to// them, and I realized that these kids did not know that what they were doing was unacceptable. Being at the top blinded them to any ethics. All they could think about was being on top.(I hope this photo show two smiling innocent faces in an unreachable place with a big stick).

Because I promised an interview on Harper Lee tomorrow morning I looked through the books again tonight. Segregation, racism, so totally different from our situation here. yet there are some similarities.