Rain rain - how wonderful for us all! As I lie here with my aching back listening to the pitter patter I dream of all the wonderful vegetables I'll be eating next month.

The Israel Association of Writers in English today completed all the corrections to the government application for funding. It has been a long and difficult process - costing hundreds of dollars and no small amount of time, and I am so proud of having been able - with a great deal of help - to complete the forms, that the actual awarding of the funding (if it actually happens it will be the first time English writers won anything in Israel) almost doesn't matter.

Yes it does. The organization will go under without the funding and I still have hopes to getting some recognition some day for all those writers who have no connection with Hebrew lit but live here.

So as the Sea of Galilee fills up, I too am enjoying a sense of fulfillment.

Here is the Kotel: 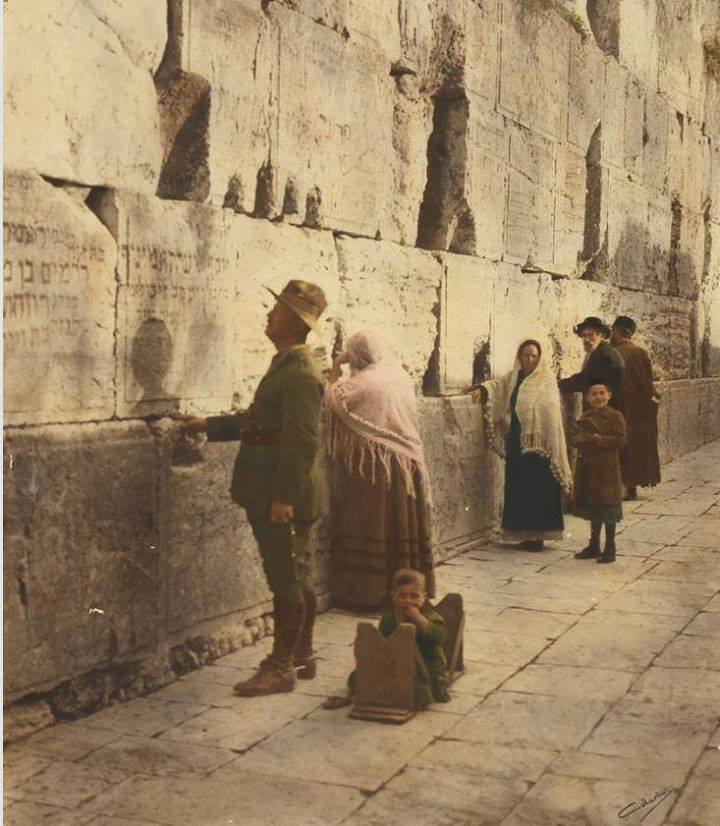 Years ago, when I saw people walking backwards away from the Wailing Wall, I realized that we had become idol worshippers and that stone was becoming too important to us. Today at the Wall, I was angry. I remembered how important that wall had been to me the first time I saw it, how it recalled the longings of generations of exile, and the new freedom to rebuild. And I was angry that the new fanaticism had cheapened the genuine feelings.

I actually had a great reason for being there. Wait For Me the Russian tv program that looks to unite relatives, did a shoot with me in front of the Wall, as I made a plea to find my cousin, Alexander Kaganovich, the only surviving relative of my mother's family.At the end of my little speech, they asked me to connect my desire to meet my family with the place where we were standing, and I, always willing to please, talked about how "here, where the Jews place their wishes and prayers, I wish to be reunited ...." Oy. I mentioned my brother, my family, my husband and son in the frame, and they did not break down with laughter. Neither did I. Even though my little shtik was exaggerated, and on the border of comic, there was something deep inside that was serious to us.

Maybe the first time we laughed was in Abu Ghosh on the way home when we had a wonderful lunch at Neora, ordered from the menu. 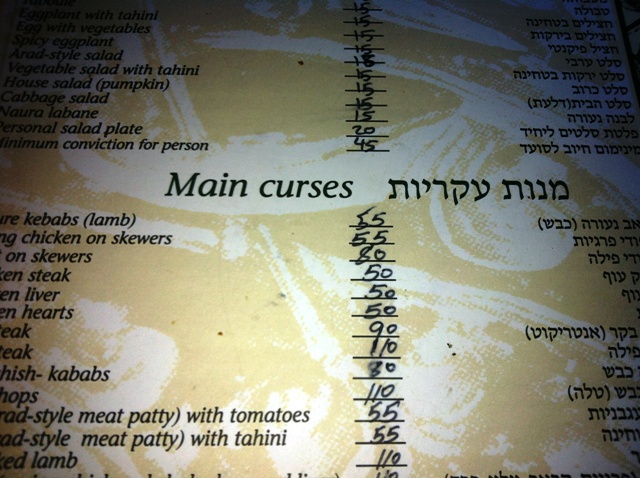 Oh, and I read a poem to the Russians:

And if he is not wiser
And cannot provide
News from long ago
I will give him my stores
My memories, photographs,

If I were making something that I thought I would need for protection, and the people I thought to protect myself from told me that it was wrong and they were going to punish me, I'd probably step up my efforts... So with Iran. The only problem is that Iran wants to wipe out Israel and is close to being able to do it. So I can't really sympathize with Iran. They aren't talking about self defense, but wiping us off the map. If this means what I think it means, we're in for hard times.

In the mean time, I am certain that if people from warring countries were put together to discuss what they want, they'd work out some way to avoid violence. Especially if women were in charge.

I wandered lonely as a cloud...well, Ezi was with me and took the picture: 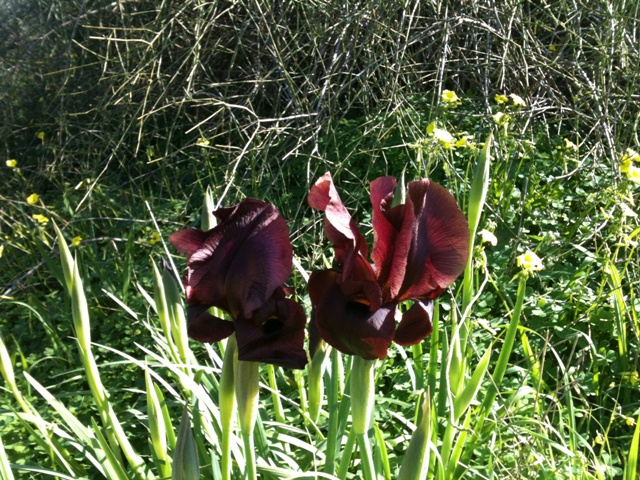 It's black iris time in the fields by Wingate and the weather today finally let us out to go look for them. Heavenly weather, Heavenly flowers.

They're building the new ecological center at the university overlooking the road. It's where the people of Sheikh Munis used to shoot at Jews and today the road (my favorite road because it gives an incredible view of Tel Aviv Ramat Gan and points west) was closed after old munitions shells from the Mandate were uncovered in the ground. Lots of them. Let's see what more they find there...

Khahvedjian, an Armenian photographer of the thirties in Palestine, has photographs scattered on the web that absolutely astound me in the way they bring the things I'd only heard about to life. A Zeppelin hovering over Jerusalem, the peacefulness of Tiberias, a gypsy dancing... The clarity of the vision is amazing. And, if you notice the photos of the wailing wall there is no separation between the men and women.