Ha - Fooled you! You got used to a certain number sequence and now i've skipped ahead a day. Got tired of that page. Want to start over.

We're watching this program on channel ten that is examining Arik Sharon's treatment of the Intifada and the decisions he made to protect Israelis. Questions, examinations, analysis, blame, praise.

This kind of analysis, digging into the deepest questions of history,motivation, ethics, is one of the things I like most about this country. Not what happens, but what it means.

Too bad we can't and don't do it in the present.

The flu epidemic is ebbing. That means the hospitals are full, but only to 100% capacity, not to 180%. Most of my friends are still feeling sickly, but apparently the worst of our winter is over.

Woke up with a headache, a backache, and a feeling that I really shouldn't leave the house. But today was the day before my doctor's appointment and I was supposed to come with test results. Was I supposed to be fasting? I couldnt remember, so I got dressed quick and raced out to the clinic. Unfortunately even though I had calculated that by 9:30 all fasting people would have gone home to breakfast already, I was wrong. The room was filled with screaming babies and other people. Big mistake. I hate screaming babies. So after an hour or so with my ears ringing from the noise, my number came up on the screen. And the technician called my name and gestured me over, Suddenly my nerves stopped vibrating. The lady was warm and sweet. She looked at my file in the computer to see what tests had been ordered, and at my history to see when my last tests were. "Too bad you've had breakfast," she said, "It doesn't matter for these tests the doctor ordered, but you really should have other ones too - it's been a while." "I DIDN'T have breakfast!" I explained, almost in despair that the doctor had not mentioned the other tests or the fact that I could have eaten. "Never mind," she said, "Let's just give you the whole slew so your fasting won't have been wasted." I almost kissed her. Just for blood tests. 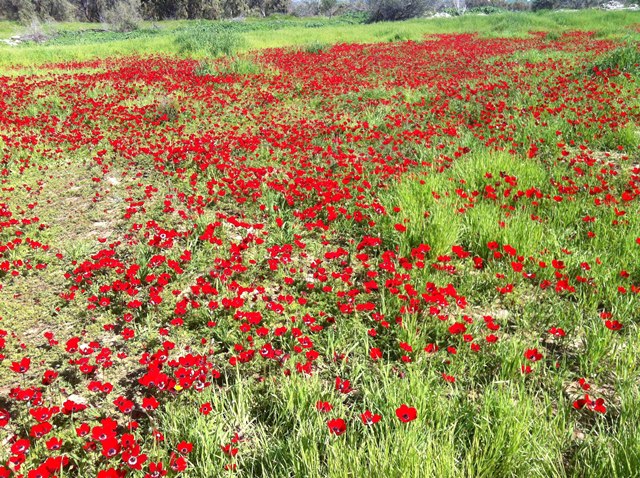 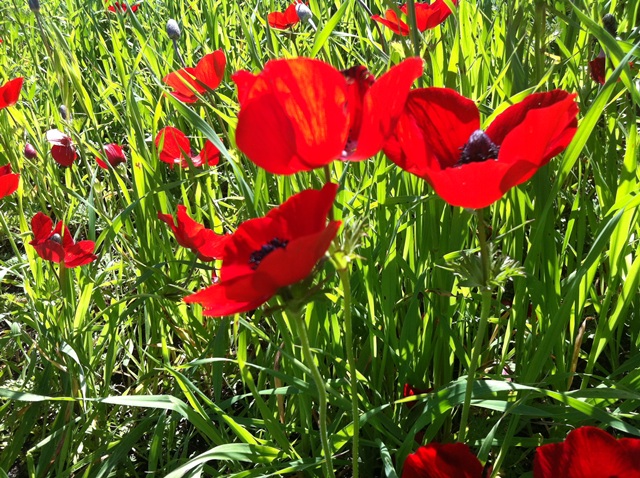 ho hum - the road to the Rafiah crossing at Gaza is just full of them - poppy fields forever. Ironic isn't it, that just recently the rockets were falling all over the place - and they will again.

PTSD. Post Traumatic Stress Disorder. The latest studies showe that even soldiers who aren't in battle can have it, that they may react with PTSD even if they were just performing ordinary tasks at the base. But what, exactly, is disorder? Today, as I was reading the article, the sirens went off. "It's a school drill," I called out to the cleaner, and she said, "I know. I heard on the news yesterday." But I felt my heart beginning to pound, as if I should be grabbing my loved ones and heading for the shelter, and minutes after it was over, I could not calm down. "Good for you," I told myself, "You'll be ready when it really happens."