You figured it out. I couldn't understand what the hell to do. Sometimes i had limited access and sometimes diddly.

And I had so much to talk about - the 3 types of Israelis and the two types of Jews, for example. The strange silence of the Israeli Counsel when I asked to help out with promoting Israeli literature, the total absence of the word Israel in NY except in some negative propaganda, and the overwhelming number of excited tourists to Israel I met on the way... Too bad. I have no memory and now no time - got to get other things together first. Talk to you later.

The new Israeli Socialist Party, Yachad, has a website.

Check it out. I haven't yet.

In the mean time, here's one of the pictures from NY. 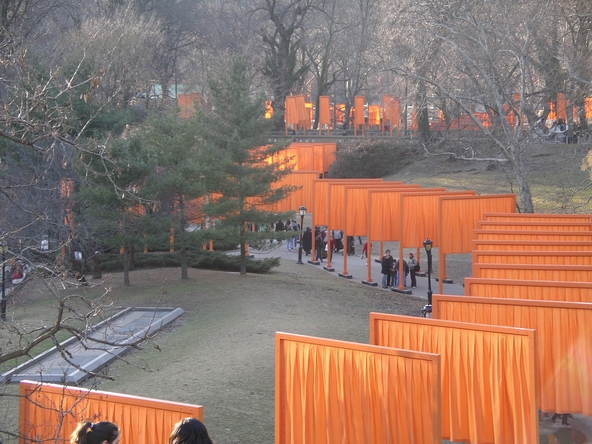 What is a picture of Christo's wrappings from Central Park doing on a Tel Aviv Diary site, you ask? At first, when I walked into it, that temporary installation that costs millions of dollars, I thought: Narishkeit. That word kept goin through my head. Think of all the people who could be fed and clothed with the money these shmates cost. Then I thought, since the money was already spent, and is lost, maybe it shouldn't be a total loss...I'll enjoy it. But the idea is a useful one. The idea that a frame, a context, can alter even a natural scene, something that you would normally consider unchangeable, is what is important here. The bareness of central park in February suddenly is transformed to a way of seeing. And the park is full of people, wherever you go. Now doesn't this mean that the world can be transformed through vision?

No, says another voice in my head. This installation means that you can fool a lot of people with rags, with making things SEEM different. And suddenly here was a metaphor for American politics.

And what about Israel, everyone kept asking me while we were there. We are not in Israel at the moment, I answered, and things change by the minute. I can't comment. Give me a while to get home.

Gila Ramras-Rauch died yesterday. Hebrew College has an article about her here. She was a distinguished scholar of Hebrew literature and an amazing person, but I knew her as my friend's sister and comfort. She will be missed in many ways.

Robert wrote me that I was really off in my evaluation of travel books on Israel. "Israel-oriented books are in every bookstore--travel guides--everthing. Where have you been browsing?" I think I wrote this but maybe erased this - I started out with a few bookstores in Boston and New York. In Barnes & Noble on 66th and broadway the other day, for example, i saw whole sections of travel books and travel essays. And no book on Israel. On Amazon there is no guidebook past 2000. No travel essays. Not even Mark Twain's Innocents Abroad. Now Israel has changed radically since 2000. There are completely different roads, different places to see, places to avoid... and Fodor hasn't updated since 97. And the Israeli government hasn't even published a little pamphlet.

It's not from lack of interest. The country is filled with tourists right now and Israeli blogs have lots of hits. Mostly because they are talking about ordinary life here - where to go for a drink - where to see things - where to dance - where to work.

Why don't we start here - if anyone writes me about sites or cities of Israel I'll post it on a special page. I'll do Palestine too. But should I do it on a binational page or 2 separate pages?

One of my good friends always talks about a binational state as the only solution. I've never been able to take that idea seriously as a realistic possibility, but ideologically it seems fine.

Arik Sharon is becoming a big hero now - having made the hardest decision of his life. How did he get out of being the excoriated villain?

After hearing Gish Jen (The Chinese-American-Jewish writer) talk about the idea of Americans inventing themselves yesterday - I thought that we have the more perfect example of that: our government. Our government, like the American hero, takes on new images and identities daily lately. And in our history we were the poor victims, then the noble defenders, then the heroes, then the villains, and now the leaders of peace. wow.

Boy did I blow up at a delivery router at noon today. I told my friend it was a typical Israeli experience, but she suggests it is probably universal. Still, I cannot imagine this experience anywhere else.

Before we left Israel our ancient washing mchine broke down. Ezi looked at it longingly for a few days because he loves to fix it, but we finally decided we needed a new one. But we had no time. So we left a pile of laundry and locked the door.

The day we returned we went to the closest appliance store, ALM, and bought the newer version of the old machine. No comparison shopping, no consumer reports - we were out of clothes. And the next morning at 7:30 the router calls to say they'd be delivering the maching that morning. But I couldn't be home that morning. So she said she'd be in touch about tomorrow. To prevent that kind of last minute announcement I called her back a few hours later and said - so we're on for tomorrow? she said, of course. and you'll be in touch? sure. So I arranged to stay home.

At 8 I called her - are you sure? sure. At 11 I called again. Are you sure? yes. At 12 I called and asked her for the number of the mover. Then the decided to look it up. You're not listed for today. Why did you think you were scheduled?

I didn't like that answer or that question. So I reminded her we had spoken a few times. You didn't understand, she said. Now when I get screwed and blamed for it I get angry, so I began to explain to her how it would not have been in my interest to stay home and wait for this machine if i was not assured it would arrive. The same supercilious tone. This revved me up further. I told her if that if she would apologize it would ameliorate the situation. You misunderstood. Finally we agreed that someone would be here tomorrow to receive the machine - but, I said menacingly, this is not the end of this.

Of course, there is nothing really to be done. When I told Ezi, he said, well maybe you DID misunderstand. I realized that if i called the salesman, he would either tune out or put me on speaker phone and entertain his friends. I have no name for the company or the girl (she even answered the cellphone with a laconic 'hello',) so i don't know where to complain there. .

Now much of this story is typical. Waiting for repairmen, deliveries, etc., is universal. The part that is unique is the refusal to accept any responsibility. It's integral to our culture. And its a poison. Because there is no way for a society to improve unless the buck stops somewhere. And that's why I'm not going to give up so easily.

The stories of child abuse and senior abuse in the news today, the sentencing today of the Haifa man who killed another man in a quarrel over their dogs, all of them show us something about the growing violence here. Our president noted that we are all responsible for this situation, but I doubt anyone was listening.

It's going to be another sundrenched day, and I will be waiting for the arrival of the washing machine by working with the window open and looking out at the birds I can't identify.

Here's an eagle eating a lizard: 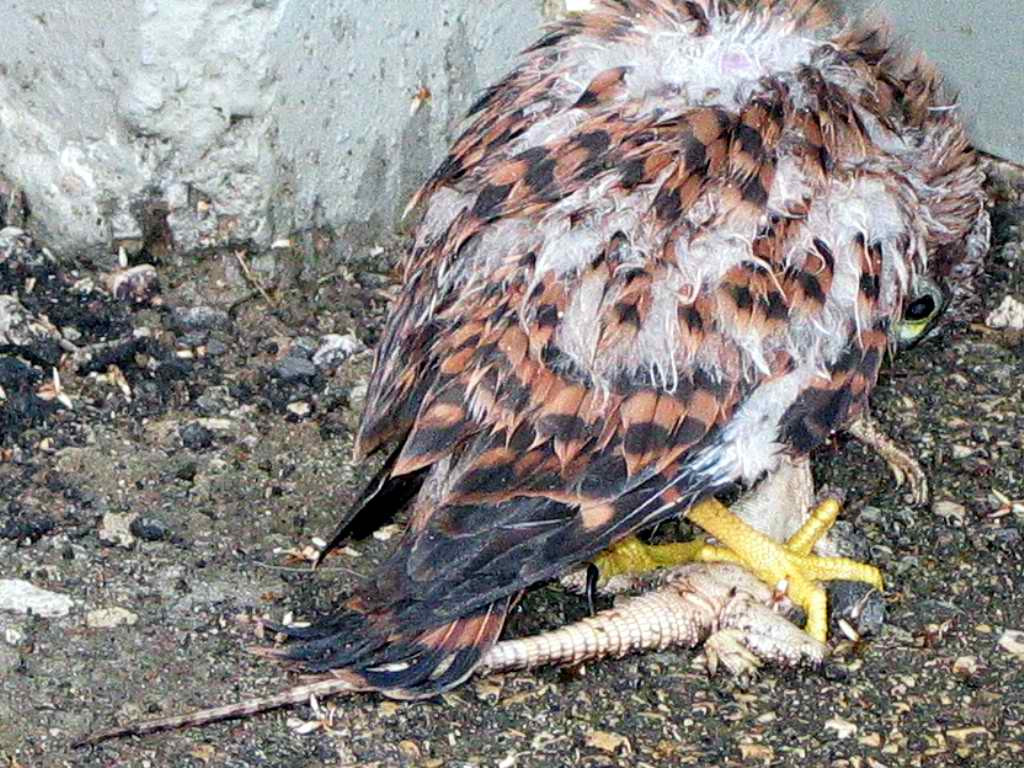 Ezi took it outside his window.

Ezi pointed out that some of the recent domestic violence in our society (whacking nannies, screaming housewives (me) and knifing teenagers) is to some extent connected with the relief from external terror. We're not as scared as we were, so we release our total control and some pent-up agressions come out. I know this is only one factor, but it does make some sense. We need to learn now how to deal with the less overwhelming elements of life.

(P.S. The washing machine is still not connected, and the washing of the month continues to pile up and the new washing machine sits in the living room and awaits the technicians. The situation was made more extreme because the movers took away the old machine, which, it turned out, was very full of fabric softener. The thick liquid released itself from the balcony, through the bathroom, bedroom, hall, living room, dining roon, hall, elevator, entrance, sidewalk, and street. And of course we were responsible for cleaning it up. Since Ezi was home with the flu I had company, but it wasn't a pretty sight.)

Let me return to the little project I suggested the other day, about suggesting great sites in Israel. So far, I've had only queries. Aren't there any readers out there who have had a good time in some out of the way tourist place in Israel?

I'll tell you what. I'll make a page when i have a few recommendations. But I need more than just a name. I need pictures, descriptions, poems, a human guide.