It was one of those days. I wrote an email to Joy Harjo to welcome her here, and got something weird in her answer that made me want to talk to her immediately. She'd been getting terrible mail urging her not to perform in this country, and only discovered the letters when she'd arrived. Now I've never understood embargos, even though I've had great difficulty accepting readings in the territories. But my refusals were my decisions, right or wrong. Being pressured into an embargo with threats, bribes, or a smear campaign - oh my goodness. I couldn't bear living in a society where my actions are determined by others, especially on a political basis.

I didn't tell her, even though we spent the afternoon together. It wouldn't have eased her situation.

Ezi made an amazing menorah from our espresso capsules: 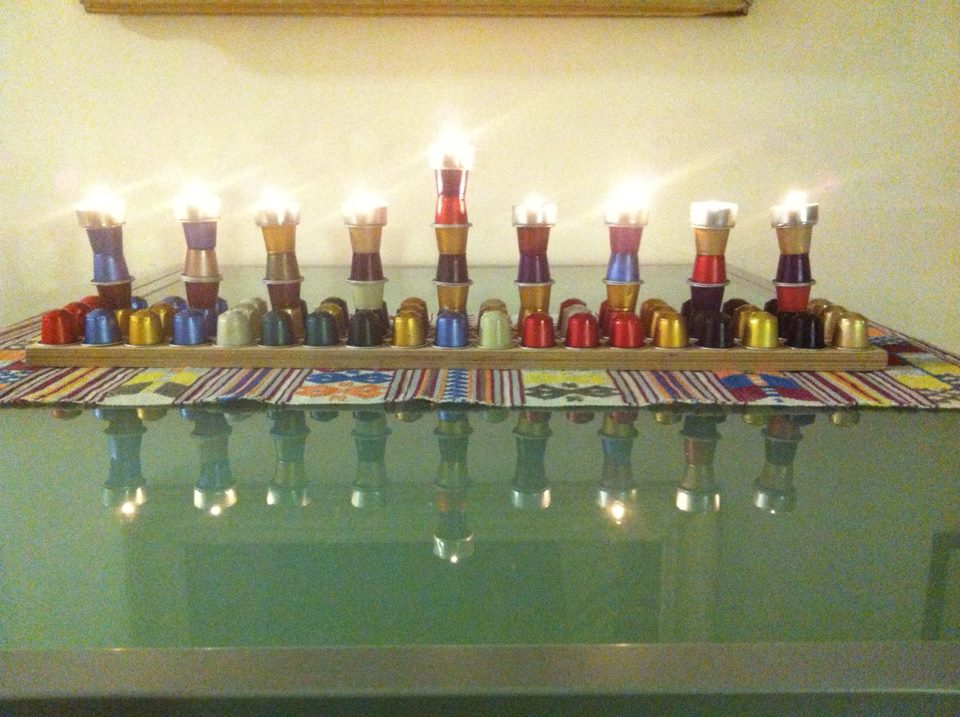 And now we'll be awake for 8 days

There is so much news I can't begin to even put it in any kind of order. First and foremost Orit gave birth to a daughter this evening, after agonizing weeks of labor and a speedy beautiful birth. It was fitting to me that Joy Harjo performed for us in those hours preceeding the birth, as if she is the shaman I have always taken her for. More about both later.

in the meantime you might read this review of Layers online.

now, after a sleepless night and a long day I'm off to sleep.

How wonderful for me that I have had no time to listen to the news or watch the reports on television. When I do catch a glimpse or overhear something, it depresses me - so having a baby with a clean slate is an amazing alternative. Unfortunately there is also a strike of the nurses in Israel - a justified one I might add - and so Orit had to contend with that as well as having a new infant. So even a newborn is not immune to the workings of the world.