Watch Fox news and you see a completely different Bibi than you see here. Which is believable?

The rains today made travel very uncomfortable. The usually invisible Ayalon river ran over and flooded the highway, and our little street looked like a river as well. Thinking the traffic would be a mess, but not wanting to miss my appointment with the eye doctor, i decided to walk the half hour to his office. Had I been less chilled I would have taken photographs of the transformation of shrivelled earth, since the amount of rain could not possibly be absorbed by ground as solid as the concrete around it. But I couldn't struggle with my bending umbrella at the same time. And I came home and went to sleep for an hour. And no, we don't think my retina is detached

after a day of children it is wonderful to be able to talk to people my age and older. And what wonderful conversations we had - about recollections of Dahn Ben Amotz, Ka tzetnik, Leah Goldberg, People just a bit older than me remember these people well, and their knowledge of them reverses our conceptions of them and our concepts of history as well. Me i was a friend of Dahn Ben Amotz from sometime around 1976 to 1985 when we left for the US. When I returned in 1987 we didn't have much of a chance to meet - he was sick and I was in culture shock. but he was one of the most wonderful people I've ever met. 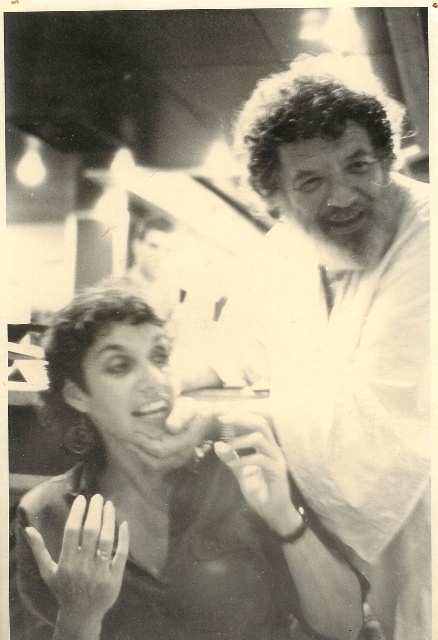 and he has disappeared from the literature and culture of this country even though he helped create the language and the culture. There is a story of Ben Amotz I once translated here. There are some words I'd change, and the format, but the story itself - just one of his byblows - is a good example of how even an incidental story has a lovely depth. The way he places his work in Rome - just after the holocaust - bringing illegal immigrants, Holocaust victims, to Palestine - is only mentioned in passing as the excitement of illicit passion is foregrounded.

If you go to the dunes today you can see the power of the last massive rainfall. The walls have been resculpted! with rivulets that flowed to the sea. what a waste! We sat with architects of the city yesterday who complained that the laws regarding drainage have been broken again and again. The cement covering the ground in the cities here have made it difficult for flooding not to happen, and we have no system for water storage. I hope we learned something from this unexpected raging storm.

here's the video of my reading in Jerusalem last week.

Because Ezi's father was Hungarian, we go to the meeting of the Hungarians. this evening it took place in tel aviv and consisted of music of Andre Haidu, a lecture on Hungarian journalism and a comic who spoke about being second generation hungarian. the professionalism of the evening was palpable, even though it was clear that it was arranged to push the new museum to be built in Herzlia forward. The present museum is in Zafed, but - according to the founders - it belongs in the town for which the most prominent Hungarian is named, Herzl. In this time that we are still trying to regain all the history that has been lost in the holocaust, he museum does remarkable archival work and I wish it the best of luck. I wish i was as organized and professional with the English Writers' Association.

I don't believe in praying - as a child I was always told that Jews do not ask the Lord for anything, that they only praise. But in the case of the shooting in Ofra, where the baby was delivered in the 30th week because the mother was in danger of bleeding to death from a terrorist bullet, prayers are the only possible reaction. A group shooting from a speeding car is difficult to trace, the 21 year old mother seems to be out of danger, and the husband will recover soon. But the baby...

"Hi Miri, Neshama (my soul)," "Hi Ahmed, how're you doing?" "My son's picking me up later - will you still be around?" "I've got to leave at five - we've got a wedding in the village..." I'm standing at the counter waiting for some prescriptions and have little else to do but listen to conversations. Most of the conversation is among the three pharmacists who are chattering in Arabic and doing a lot of laughing in between, secure in the knowledge that their jokes are private. i can pick up a few words here and there, but understand no more than the fact that they are talking about girls.