After many years of getting Ha'aretz every morning, I cancelled my subscription because of the narrow and uninformed way they were covering the faculty strike. I got a letter back from the editor, Amos Schoeken, to the effect: "If that's what you think of us, it's surprising you've been reading us all this time." I think this letter in itself shows something about the newspaper.

I'd say much more about the subject of Ha'aretz, but I've got much to talk about and I have to get to a concert of Panic tonight. Here's a scene for you: A young Arab woman singing Bialik in the President's house. Miriam Toucan at the award ceremony for Presidential literature prizes this afternoon. And then after all the speeches, Peres walks over to her to shake her hand. Miriam Toucan did not compromise her identity in any way here - when she sang Yoram Tahar Lev's poem about wanting to return to the village her trills reminded us that her village is a different village, even though it is also the same one. (I can liken this to the title of the unpublished student anthology I once helped organize which was titled "Here" in English, Hebrew and Arabic - but the word in these different language means different places, different 'heres')

The whole ceremony was beyond belief to the same degree. Shimon Peres read a few passages from the amazing Julia Weiner's work, about which I have written before (in April this year), and spoke knowingly and intelligently about the works of Salman Masalcha, Shirley Kaufman, Shimon Balas and Alon Chilu.

What about Panic? I'll tell you how it was tomorrow. Worlds collide.

There is a poem about Peres in my book Life in Israel, page 9. I've long been a fan of his, and the choice of Julia Weiner to add to the list selected under the reign of Moshe Katzav gives the whole list an added depth. Shirley Kaufman's long career as a poet in English, in which for the past thirty years she has written about the complexities of living in Israel is enhanced by the presence of her parallel who writes in Russian. Other prize winners write in Arabic as well as Hebrew. And all are part of a literal 'mosaic.'

Where have I been? Sharon Moldavi's second single has been out for weeks and I didn't know. You can see "Don't Be Afraid" at his site.

Tel Aviv University has a leader. At last. Zvi Galil called us to a meeting - first time in 30 years I've ever been invited to a meeting by or with a university president. There was a great sense of anger because the organization of university presidents had called to issue court orders against the lecturers, and there had been demonstrations and violence in Beer Sheva and Jerusalem today. But he neutralized the whole meeting by announcing at the beginning he was against court orders, and suddenly he had all the faculty in the palm of his hand.

I remember this kind of technique from student demonstrations against the war in Vietnam in the 60's. My brother used to call it the marshmallow technique. I'm still grateful for it, and for him, It's the first kind word we've had from any administration since way before 1997.

All right, Panic Ensemble. It was on Tuesday and you weren't there. Well I don't think you were. The place was packed with people, all totally unknown to me. And they were incredibly enthusiastic about the music - even enjoyed the words (mostly mine but Roy and Yael's as well). It was amazing to me to compare with the usual staid audience of literature. How hungry we remain for literature, for poetry, despite the hatred of institutional education.

The Jerusalem Post published the article by Menachem Nathan that Haaretz refused to touch. Read it and write a response: Jerusalem Post and commend the bravery of the Post.

I have to say I am shocked by the fact that Haaretz wouldn't balance its prejudicial attitude toward the universities, and that the Post would. It goes to show me at least that - as careful as I try to be about getting to the truth of things - I have been very wrong about my choice of sources.

There was a glitch in my page today - Sorry!

You ask why I like Pappas so much. It isn't just me. 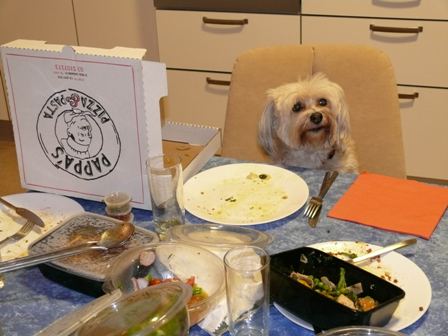 There are some things you don't get used to. You don't desensitize when you have been through a series of tragedies. Benazir Bhutto's assasination took me back to the night Rabin was murdered. That sense that the worst with their passionate intensity will destroy all the leadership forces for good, that no matter how you plod dedicatedly towards positive goals, there is ultimately a single weapon that will destroy it all. Nevertheless, there is no choice but to try to continue to make the world a little better place. As my patient old rebbe answered when in response to a speech about how I must continue to devote my afternoons to study with him, I said "but what if after all this work there is no God?" he replied, "What's the difference? Whether there is a God or there isn't a God, a Jew must study Torah."

(Of course it is better in Yiddish.)

Last night at the fabulous dinner Sophie created, some of my most decision-making friends in politics asked me about the faculty strike, about what it is about. I am not much of an explainer. As my students know I do a lot of showing not telling. So I brought out my salary chit. It went around the table, each economist examining it clearly, and not saying anything.

Afterward I remembered a dinner I went to in Long Island where after we had feasted to the point of total satiation, the host's mother took us into the kitchen and showed us that the cupboards were empty, the fridge was empty, and their account was overdrawn. I hope the guests last night didn't feel that when they saw my paycheck!