tonight is the first light of Hanuka. My grandchildren will only be here on Wednesday, so i have 4 days to figure out how to explain the bar kochba revolution in the light of the hanuka legend.

Nevsu is a local television series about an Ethiopian man married to a blond woman... it is not all that unusual in this country but it is incredibly funny in this series. no wonder it won an Emmy. See if you can find it and let me know. it is really worth watching.

Our prime minister is accused of bribery and we are celebrating Hanuka. the first day, second candle. tomorrow there is a strike of all women protesting the government's inactivity in relation to the murder of women. the government has been so busy filling their pockets and playing all kinds of power games that there is no energy to do anything about this and so many other situations. This terrible 'problem' extends to all the races and communities in the country. In many cases there are prior complaints on the part of the woman and all that need to be done is a leg bracelet that warns the woman when the murderer is coming near, but in other cases it is a question of education - on the part of the perpetrator as well as the community and the woman herself. this strike tomorrow - for which many working women will be compensated - may have something of the proper effect, and the feeling that it is absolutely necessary for individuals to take their lives and their governing in hand may well spread to other aspects of society. we are desperate.

and where is Bibi? in Belgium.

For years I've been writing about Metula and the feeling of tunnels there. For years I've been photographing the cement factory in Lebanon you =can see from the center of the town. My friend lives next to what was called "the good fence" of the Lebanese border and whenever we visited we were aghast. here

The residents had plans of how to evacuate. And now the army is finally blowing up the tunnels.

Do you remember the wedding I held on the border? 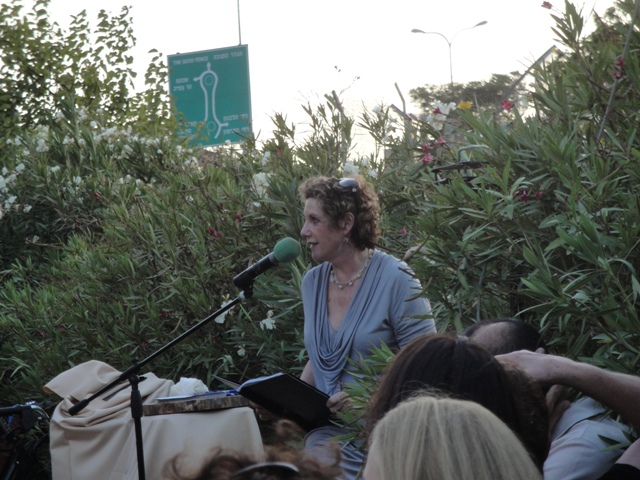 that was 8 years ago.

Thousands of pardons. I've been lax with my html lately but i hope the shame of my latest flub this will help me pay more attention to links in the future.

I mean, the whole tunnel thing - a tiny piece of the planned attack of the Hizbullah to take over my poor widow friend's house and her town, is not something i should shut up about.

But instead of begin glued to the television, or going out to march with the women against violence, i went to Jerusalem to read poetry. An audience I've never encountered before, a place i've never been to, and a wonderful experience. the kids - mostly under 25 i think, filled the bar and read their own poems, beautiful poems, as if they were just anywhere in the world. There was no mention of anything else. not politics, not religion, not Jerusalem. It was a great experience if just for that alone. I've always been afraid of the 'jerusalem poetry syndrome,' the ones about the holiness of Al Aksa or the light of grandmother's candles on the wall of the hotel, and for these people, jerusalem was just part of where they lived.

Rainy Day Activities. we made breakfast for the kids at 7, were out with 2 of them to the Diaspora exhibit by 9:30, and were the first ones at the door to see the exhibit of Heroes. As we entered, preceded only by 2 eight year olds who pushed ahead, we were run over by a stampede of kids from the hannuka camp of the university. by the time we regained our footing and got to the interactive exhibits, there were lines of three or four in front of each computer screen. nevertheless a good time was had before we escaped to see the one-man puppet play about the wise men of Chelm by the train company. i kept turning around to see if the parents were bored and/or on their phones, but the amazing performance of one actress and her manipulation of the various puppets, their environments and their accessories kept us all riveted. Even though the cliches about European Jewry are embodied in this play with those cute stories about how stupid and blindly religious Chelm, I clapped more than I applauded for "Toutes Les Oiseaux."

Back to real life. The more information that comes out about the tunnels, the more I realize in retrospect what i have been seeing and what our prime minister has been hinting act for so long. when he stopped the fighting in Gaza he DID know about something he wasn't telling. the only problem is that we don't have a minister of defense or a foreign minister and everything is in the hands of one person when we really need a team that we can trust.