I wish my mother-in-law was alive. The year she died a few months before her 94th birthday we went on a ride around Yaffo. She hadn't been to look around in the residential part in 50 years (or at least that was the way I remembered it) and she was overwhelmed. "It's the same," she said, "the same dirt and decrepitude. You'd think the city would fix it up." Well, now it seems to be changing. Not just gentrification and new buildings (which may or may not be good) but streets and historical sites and signs. I have to go there with Ezi and a camera to see what's new and what's still a wreck.

In case you think I've forgotten about politics and security, here's a site to wake you up: Terrorism Information Center. There is stuff here I've heard before but there is also a lot that really makes you think...

"So you've changed your politics!" My friend says, "Now you see how awful they are!" One does not negate the other. There are organizations and there are people. Organizations as we know change, and the people within them can change too. And I too change from minute to minute and all my changes are me and so forth and so on. But we have to try to work things out, while not denying all the complex realities.

When my friend Ali Salem drove here from Egypt, he had to fix his car after the drive through the desert, and of course went to Yaffo when the mechanics spoke his language. But even that became problematic. It turned out that the terms in Egypt for auto parts were imported from the French, whereas the terms in Israel were German. So even though customer and mechanic spoke Arabic, they had trouble understanding each other. How much more complex it is when we don't speak each other's language.

"Yeah, yeah lady. You and your memories. What about Tel Aviv today?" Well I picked a strange hour to navigate the city. It was six in the afternoon, when most of Tel Aviv is napping before the evening outing or cooking Shabbas dinner for the family. That way I was sure I'd get a seat at Pappa's. The streets were empty, and so were all the cafes. A great time to get a real feel of the city.

The Rape Crisis Center held a sale of fashion designer clothes, and just about every one I knew was there. 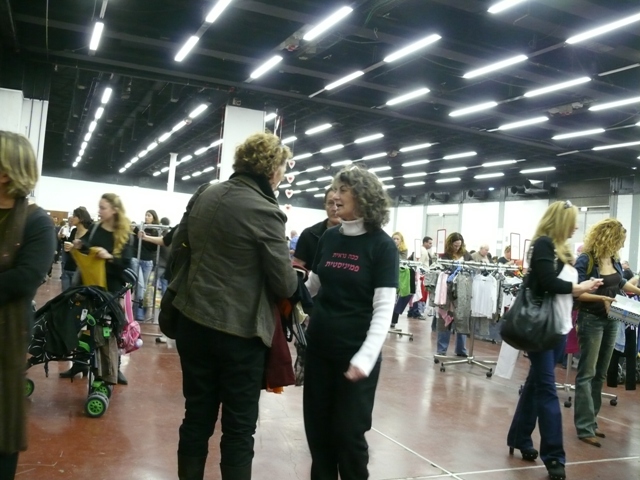 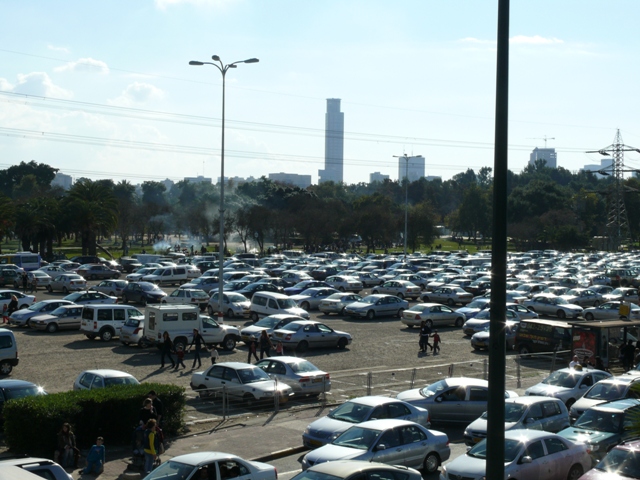 You might notice also the cooking fires and the number of Arab families enjoying themselves in the park between the cars. Friday and Saturday are barbeque days in every corner of every public park.

Here's some more stuff to put on your calendar:

The Israel Association of Writers in English proudly announces the publication of the 19th issue of arc, the annual literary journal, edited this time by Mordechai Beck and Jeff Green. This issue concentrates on literature and other arts, and attempts to open a dialogue with film, theater and dance as well as art and photography. To celebrate this occasion, our first three events will be held in January and February:
January 3, at 8:00 p.m. Kehilat Yedida, Rechov Lifshitz 12, Baka’a, Jerusalem. Participants will include Karen Alkalay-Gut, Judy Labenson, and Jerome Mandel. Art by Mordechai Beck, Mark Joseph, and David Brauner.
January 22, at 7:30 p.m, at Tmol Shilshom in Jerusalem. Lois Unger, Mark Stone, Karen Alkalay-Gut, Jerome Mandel and many others.
February 24, at 4:00 p.m. at Tel Aviv University, Webb Building, room 001. Details will be announced.

As many of you know I am a big fan of the German/Jewish actor, Kurt Gerron, a world war I hero killed in Auschwitz, and continue to try to find out about him. Lately I've been successful in finding a few of his many films and was very surprised to see he is not there. So here is my latest news:

When I first saw the reconstructed film “People on Sunday,” it was for the purpose of seeing Kurt Gerron, who is listed in the credits. But I didn’t see him. I saw it twice and didn’t get a glimpse.

I didn’t think anything more than my own vision was limited, that I kept getting so involved in this wonderful picture I didn’t notice him. Perhaps he was thinner, wearing something else than I’m used to. But it was a fact that although I watched and watched he wasn’t there.

So when I watched the reconstructed version of “The White Hell of Pitz Palau,” that 1928 film with Leni Reifenstal, I paid particular attention, and didn’t miss the split second scene where he sits in the background in a bar surrounded by a few women.

But I couldn’t figure out the context. Not only why is there a teensy crowded bar scene in a vast film which operates on the endless vision of men and women in endless white mountains and focuses on 3 people with little additions, but also why doesn’t it do more of that, showing the world’s reaction to the lost couple, the doctor, and the students.

Suddenly one night I envisioned the way I would have done it – slicing back and forth from the starkness and emptiness of Pitz-Palau to the warmth and comfort and shallowness of the bar. And I wondered why it wasn’t done.

But the more films I see where Gerron is credited, the more I realize he was simply cut out, and all copies destroyed. It is as if the Nazis killed him twice, in life and on the screen.

There was a prize-giving ceremony at the Daniel Rowing Center last night. My particular pleasure is the emphasis on the paralympics and the efforts made to include all groups from all walks of life in the activities. As a poet, I was particularly pleased to see the dragon boats, those stylized racing boats in memory of the Chinese poet Qu Yan, in the fleet. But you won't see them on their website - they seem to be more interested in getting kids into teams than updating their PR - at least for now.

Actually dragon boats always interested me because they seem to be an announcement of the defeat of death through poetry. They always beat the regulation drum on board - i assume to scare off the evil spirits - the way poetry tries to do. Take a look at this poem by Yehuda Amichai - it was the first one I ever translated

I sit in the waiting room with other grooms
younger than me by many years. If I lived in olden times
I’d be a prophet. But now I wait quietly
to register my name with my love in the big book
of marriage and respond to questions I can still
answer. I have filled up my life with words,
have gathered in my body enough information to support
the secret services of several countries.

With heavy steps I bear light thoughts:
As in my youth when I bore fate—heavy thoughts on light feet
--almost dancing from so much future.

The pressures of my life bring the date of birth closer
to the date of death, as in history books,
where the pressures of history affixed these two
numbers together next to the name of a dead king,
and only a dash separates them.

I hold onto this dash with all my might
. Like a lifeline, I live by it
with a vow—not to be alone—on my lips,
the voice of the groom and the voice of the bride
the voice of rejoicing children outside Jerusalem
and the towns of Judea.