Lately I have been taking buses. I gave Oren my car and don't really like driving Ezi's car, especially not in the narrow streets of Tel Aviv with all the electric bicycles and scooters. So today i checked my app moveit to see which bus i take where to get where. It said that at the end of my street there is a bus in half an hour. I took my time walking down the street, and came to a stop where there were people waiting for the bus. Immediately after a bus came and everyone got on. "No other busses here" the Philipina lady turned back to tell me as she ascended the stair. So I went to look and sure enough, the number I had been told to wait for was not on the sign. So I started to walk up the road to the next stop and suddenly I hear a bus coming, My bus. But i am far from the stop. i step towards the curb and wave my hands. The bus stops and opens the door. "Why aren't you waiting at the stop back there?" he shouts and jerks the bus forward so hard i would have fallen had I not predicted the sudden acceleration. He screams something else but i have moved back to support myself while I get my card out. Something about presenting my card. I decide to sit up front so i can watch this strange driver. Yes, he does it to every old lady who gets on the bus - slams his foot on the gas just as they are getting their sea legs. But he gets through the traffic in record time. That I'll grant you. And I made it on time to my date at Dubnov 8.

Maybe I'll tell you tomorrow about the poetry reading at the library.

Nah - it was a fascinating evening - Dan Caspi and Yaara Ben David introduced each other and it created a poetic dialogue that brought the entire audience into the circle.

And for this I gave up going on the archeological hike. Ezi came home with 16 kilometers on his watch. And lots of stories of stuff I missed.

But today is a different day. Yesterday when I met the new manager of Habima theater and complained about the old unpaid debt, he suggested i trade it in for membership. it seemed like a good idea to me, but when i tried to follow his specific instructions i came upon the same run around i got when i tried to collect my debt in the first place. Under duress, I translated a play of Hanoch Levin in a rush job that so fed into my lecture trip to the States i was still finishing it upon arrival to a hotel in New York. We checked in and I logged on. And I never received the 5000 shekel we had agreed upon. Now I'm being reminded by that event not only by the promise of my old friend Noam Semel to fix it, but by the unpaid debt from two weeks ago when we drove to Jerusalem and read poems. i can't believe i didn't learn my lesson and demand the money up front.

But what really bothers me about this is that our national theater is in danger and our government is holding back the money they need to survive. i'm thinking about how to get together a campaign to save the theater, Maybe somebody out there has some ideas?

For some reason i worry about Gideon Sa'ar. On the one hand I don't like looking at him, and am still angry with him for wanting to close the grocery stores on Shabbat in Tel Aviv years ago, not because i use the shops but because he was imposing a foreign concept on the population. But what if he doesn't manage to take Bibi down? i think i'd be almost satisfied with a joint government with Gantz and Sa'ar - but it would be awful if that opportunity wasn't given him.

Na'ama Yissachar. there can't be a mother in the world who wouldn't root for her. i keep thinking about Yacov Bok and the story of his false imprisonment in Russia (See the Fixer by Bernard Malamud)

Boy, are we clueless about the environment! Recycling paper, for example. the process of recycling paper may be more poisonous to the environment than the paper itself. maybe we should be burying it and letting it become compost. And plastic - we have so much plastic packaging around here and although there is some protect around here, most people assume that transparent plastic is cleaner than dirty brown paper bags. I see more and more plastic around here despite universal warnings. And today Ezi pointed out to me that Israel's favorite snack, the Crembo, now is wrapped in plastic instead of aluminum foil with a self-congratulatory message about how they are helping to control pollution now. Aluminum is biodegradable. Plastic isn't.

The other week we visited Apollonia. i promised pictures of the fortress, the city, the wild beauty of the remains, and maybe the mosque further south. but i am slow with that. here is the view. 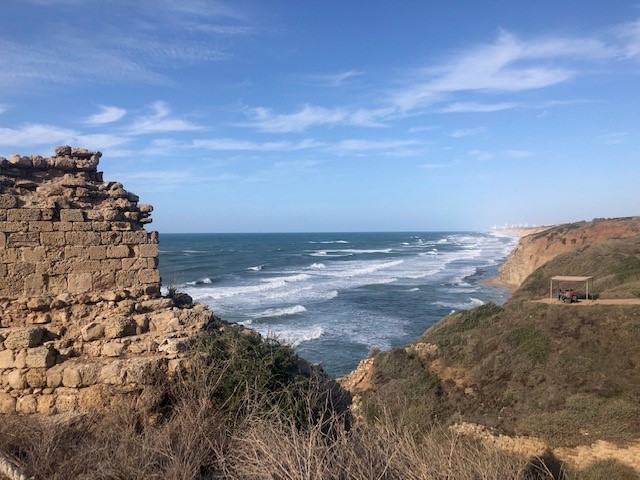 today we went to the Yarkon's source, to tel afiq. the dry weather will soon pass and we won't be able to go out, so instead of working, we toured. it is very contagious - this hunkering around historical sites in this country. so many of them, such different kinds of beauty. such a layered land.