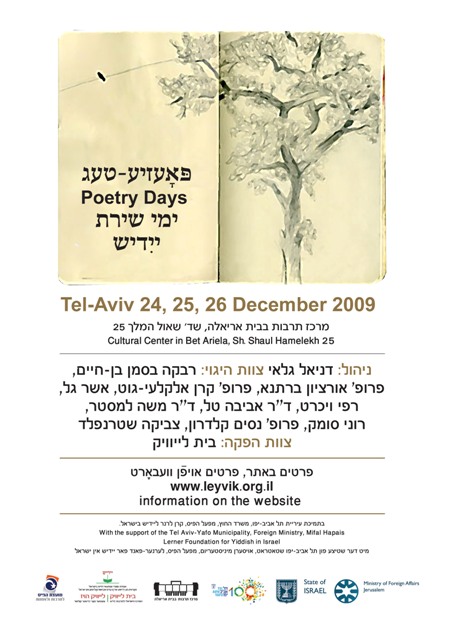 I do enjoy enjoy the perspective of Yiddish. Here are two Yiddish songs about Hannukah:

Oh, you tiny candlelights,
you tell such histories
stories without end.
You tell of blood spilt,
bravery and skill,
wonders of days of yore.

Oh Chanukah, Oh Chanukah,
A beautiful holiday,
Lusty and happy,
There’s no other holiday like it.
Every night we play dreidls
And we eat steaming hot latkes.
Come children in a flash
Light the slender, small candles!
Tell of all the wonders,
Thank God for the miracles
(now I’ve forgotten the last line some thing about dancing ...)


This is the first anniversary of Operation 'cast lead' - It is terrible to me that we have done nothing to help rebuild what we destroyed. Some readers of mine have complained that I only feel sympathy for Arabs, but I see this as part of Judaism, the responsibility for others, and if we lose our humanity we have lost everything.

One is not allowed to count people, because that awakens the appetite of the Evil One. So we always counted people by saying 'not one,' 'not two,' 'not three.' If i count the people who aren't sick I can do it on one not-hand. Swine-flu, shmein-flu - we've got colds, bronchitis, strep, and it's still not cold enough to heat the house. They better invent something to take the place of antibiotics soon because otherwise we're lost.

Around the fire, we never get tired. The night is dear and we sing our songs. And if the fire goes out, the heavens shine with their stars. So crown our heads with flower wreathes, we're going to dance around the fire, because dancing and singing are our lives, and then in sleep create beautiful dreams.

My mother used to sing this and cry, because of her partisan baby sister, but I never understood why - it seems like such a happy song. But now that I think of it, my aunt was in a mixed Russian-Jewish unit - they didn't sing Yiddish songs

And she had nothing to sing about. She certainly didn't think of survival, but revenge.

I'm not going to tell her story right now - but sometime soon.

These candles seem to be having an effect on me this year. Last year I was too involved in what was happening in Gaza to think about holiday spirit, but this year seems to be different. I go back to my favorite heroine, the one who didn't make it into the five books of Moses, the redeemer of the Jewesses, Judith. I like Judith in part because her name means Jewess, and because although a widow, she defends the town of Betulia, or maidenhood. The Panic Ensemble video of my poem about Judith is here. You can see us doing it together, with the Yiddish by be here

After a long busy day, Alicia and I watched "Der Yiddishe King Lear" - or at least the first part of it before we got too sleepy. The rest we need to be awake for.