First let me finish something of the promises of yesterday. When Newt Gingrich pointed out that the Palestinians could have gone anywhere they wanted to in '48 this was not true. No other country would let them in. They were unwanted by the neighboring countries, and were put into refugee camps where many of them have remained. Of course that original generation are dying out now, but their children and grandchildren maintain a refugee status. The idea of a homeland began then, in '48, as a substitute for the Jewish homeland. Until then, there was no concept of a national Palestinian identity.

None of this negates the necessity for the Palestinian people for a country of their own. They have not and would not be welcomed into another Arab country. This in itself gives them an identity.

Last night I got to see Pagliacci and Cavelleria Rusticana at the opera. The order of the 2 operas was shifted a bit so that Cavelleria Rusticana was introduced by the prologue of Pagliacci. I like things whole so I was chafing at the bit for a moment. You see, Pagliacci begins with an introductory aria about the blurring of distinctions between reality and art, and how, when this happens, the attempt to make a comedy may be interfered with by reality. But Cavelleria Rusticana, which came after the prologue, is a tragedy from beginning to end. Pagliacci, which followed, is also a tragedy, but there's a play throughout between living and acting. Now this is a particularly complicated time in Israel, and there are times we lose the distinctions between reality and comedy, and prefer to dream.

But when it gets dangerous, like the settlers believing they're in the wild west, and they are the cowboys against the Indians (remember Kahane grew up, like I did, in Hopalong Cassidy movies) we have to pull ourselves back into the real world.

Almost forgot - a poem of mine is in Haaretz today in hebrew translation. The poem is from 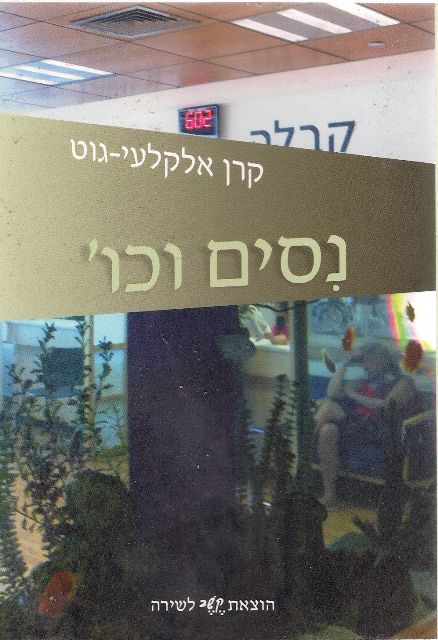 and you can order it here.

You know what always surprised me about Joseph's dream? The fact that when he tells his dream to his brothers and to his fathers, they immediately understand that it's all symbolic and it's about them. And then he goes to see them and doesn't even figure out they don't like him to the point of wanting to murder him. After he's gone and tattled on them. Why does his father send him out there anyway? Doesn't he get it? The guy who grabbed his twin brother's heel so he'd be born first doesn't get the idea of jealousy? Doesn't he understand how he sons must feel about that fancy coat? These bible guys may know a lot about God and sheep, but when it comes to human behavior they've got a lot to learn.

We are getting such short days around here they end before they begin. By four thirty it is dark. No wonder we don't know the difference between day and night.