you know how in kindergarten one kid gets to divide the cupcake and then the other kid gets to choose which half he/she wants. Well I was hoping that since Bibi got to choose the plane - and added all those extras that cost us so much money - someone else should get to fly it. maybe even Yair Lapid.

We really are fed up with all that politics. of course i blame Bibi, who would go to war with Iran just to scare us into keeping him. I see old films of him and think of how he really looked heroic in his early days here, but then i remember he was a furniture salesman and he would not be above selling me an awful mattress like the one i have just to get the commission.

i was not impressed with the restaurant Serafina in New York, even though i saw celebrities eating next to us. it seemed banal and boring. the menu here is almost the same, and there are our local celebrities here as well, but the food and the service seemed just a bit better. one step up. the prices are one step up too. but we had a wonderful lunch with old friends, and no one mentioned politics - in this case because we all believe the same thing and didn't want to ruin the day by discussing it.

One of my doctoral students needs certain books in Arabic and can't find them here or in friendly countries. Anybody from somewhere like Dubai want to find them for me? they are the recent books on Ghada Al Samman, who seems to have stopped writing lately, and therefore is a comfortable subject for research. We don't like living writers in academia, you know. they disturb the research...

Don't tell anyone, but the doctorate about Al Samman and the thesis about the yiddish woman writer I'm directing - they sound very similar. hmm

I met with a bunch of old peaceniks tonight - the guys that get into violent demonstrations and get called "Arab lovers" - years and years of experience with fighting for rights. it was one of the funniest nights i've had in years.

We got a little taste of the sanhedria train today. The dig in Usha I was told, seems very nondescript, but with the enthusiasm of our guide it came to life. I have a feeling it's all about bringing the Sanhedria back to rule Israel, so I'm a little wary, but it's also true that without the Sanhedria there would be no Jews today, that they kept the shreds of order after the Romans. 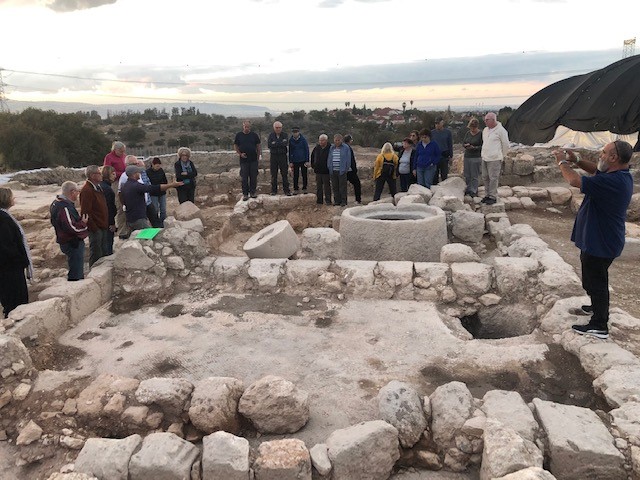 Here's part of a piece on Usha:

In Usha, where they say
the Sanhedrin, with its reformed
relaxed, religious court,
saved Judaism from extinction
I follow the enthusiastic speech
of the yeshiva-graduated archaeologist
with a joy of my own, translating his words
to what I see before me – the signs
of rabbis with real vocations—
wheelmakers, glass-blowers,
shoemakers, vintners, olive pressers –
people working as hard with their feet
and hands as their heads, laboring
to preserve a viable tradition
while knowing that life itself needs
to be defended, preserved,
ordered – knowing that leaders
have no right to anything more
than the lowliest peasant.


Or so I imagine them.
people like you and me,
with no special rights,
or money lending
or sacrifices,
and the knowledge
that if they do not help
to create life
none will exist.


Maybe, our guide admits
they’re wrong about exactly this spot
being the center of judgment
in those crucial hundreds
after the destruction of the temple
but I love thinking of our leaders
as simple craftsmen, with the simple goal
of keeping goodness in the world
flowing.

and as usual after an extended hike i go to the hairdresser. and as usual i come out looking worse than when i come in. And as usual no one in the shop has ever heard of the places i start to tell them about. and as usual their faces turn blank when i start talking. when we talked about tuscany, on the other hand, everyone had a good restaurant to recommend.

For the last elections in September we changed our entire trip, adding hundreds of dollars to our cost and screwing up many many meetings and events. But it was so important we felt we had no choice. 2 weeks ago we booked a trip to Egypt and paid 1/3 of the total. if the next elections come then i'm not going to change anything. i'm pissed at everyone. i know that Benny has to make a deal with the devil and there is no way out of demonic contracts, but there has to be a way to give him enough rope and watch him hang himself. After all, the submarine trials may very well turn up details we never dreamt of, and the remaining three trials have already brought up enough filth for the end to be near.