Because I haven't read a more clear explanation of the faculty strike in Israel than this one, here's the letter from Menachem Nathan again.

A cold or something kept me home today, and my head is too thick to make sense of things. Sorry about that. I like to start a new page with something intelligent.

Wait. THIS is intelligent. 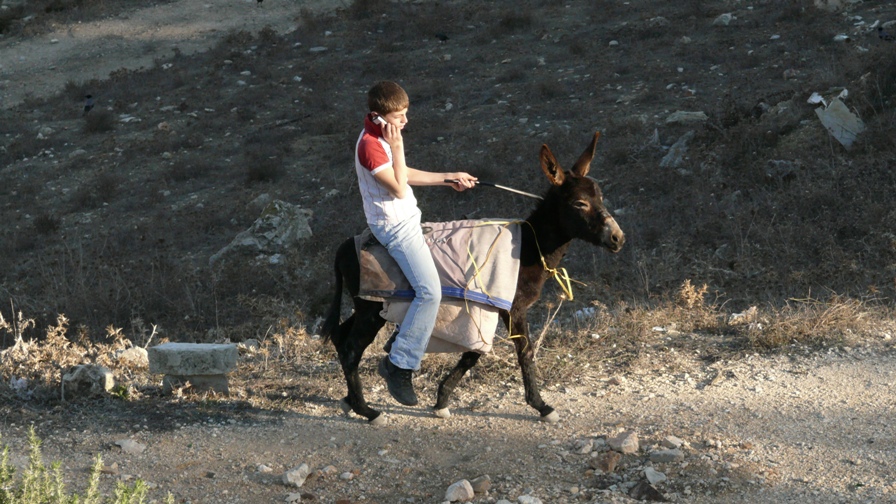 Ezi took this when we were in Jerusalem overlooking the wall somewhere. Ezi can rarely take the classic photographs because I'm constantly at his elbow diverting him with trivia, or at least with different subjects. This particular boy was wooed by my fascination with him and started doing trick riding with the donkey. The donkey however was not terribly interested in tricks and needed some serious beating to obey. I thought that it was better to get to know the boy, maybe tip him, and then suggest he train the donkey with treats, but a woman next to me couldn't contain her horror at the treatment and called out a criticism to him. The boy, the donkey, and the phone vanished immediately.

My delinquence in these pages was due purely to an overload of work. I didn't even demonstrate yesterday. Keep a worker busy and he'll never revolt.

But what i really wanted to do was walk down the beach. These are the last warm days of the season - soon we'll begin our struggle to get our neighbors to agree to put on the central heating (one of the first certain signs of winter.) In the old days it would be December 15 and the stone floors would warm with the hot water pipes beneath. it is heaven.

I continue to identify with the teachers' strike and of course with the faculty strike at the university. The more we strike the more I see how much needs to be changed. The basis for this society is education and no one but the teachers seem to care about making it better.

This evening in Ikea while I was sitting on a bench and waiting for something there were some children speaking Yiddish on the bench next to me. The two little girls sent their even littler brother to sit on the scales and the salesman didn't know how to tell him that it was wrong. So I intervened and said something in yiddish about it being a bad idea. The children all looked at me as if I were a creature from out of space. How could I know their secret language? And the mother suddenly appeared, "kim avek" she called out to her brood, and they left after her, turning around to stare and watch me wave.

This suspicion was particularly illustrative considering the fact that my general experience in Israel and my specific experience that evening have been filled with positive conversations and flirtations with little kids. I guess I'm a dangerous enemy to them.

I seem to be doing a lot of shopping. It's a great escape. Today I explored the shop in the Israel Museum, looking at jewellery I can't afford. It seems we spend a great portion of our shopping in gifts. So many celebrations.

For some. For the people of Sderot it is the opposite right now. No wonder the mayor of Sderot quit and had to be convinced to come back. So many years of making life-and-death decisions, so many dangers to be avoided in additional to all the usual mayoral ones... All I have to decide about is whether to buy a set of shabbos candles or a mezzuzah...