And here is the poem I wrote for Hannukah again

they always do it

then cut off your head

and all that teasing

and you can be sure

know how to please

they always do it

cut off your head

they’re always at it

Sometimes I look at the Arab construction workers in my neighborhood or in my flat, and I think, they know so much about building, about explosives, about all the latest techniques! And today, when I saw the tunnel that blew up under the soldiers, the complex methods they used - I remembered that thought. These are the guys we taught to do our dirty work, to build and destroy, and look how much further they have progressed in their studies!

We are all praying for the soldiers - I cannot imagine how awful the fighting must have been in Rafiah just now.

Can you imagine how the villages will greet the coffins? the ambivalence that multiplies the pain?

Lots of times their friends reject their decisions to volunteer in the army, and they are rarely recognized as heroes by the Jews.

The Beduin have been amazing in their roles in the army - always at the key positions, and the most dangerous.

My confusion about where things are in an up-side-down house has spilled over even into dates. I thought yesterday was the 11th.

Said Kashua won the President's Prize for literature. His picture in the paper is now on my kitchen table where the counter-top men are cutting the marble - wearing face-masks that cover the fact that they look just like him. I am thrilled - because I know he is too young to have won on his achievements, but because he addresses the issue of the problematics of Arab-Israeli identity. And this means that we too are beginning to see the other as part of us. Yes, yes, it may also mean we are tokening... but its a good beginning and he's a great writer.

Why have I never won anything? One of the judges for this prize asked me that only a few weeks ago (I don't remember the exact date - i just remember he sat in this very devastated kitchen and asked why we got into this mess in the first place - and i tried not to cry). Or more to the point, he asked me why do all the prizes exclude English writing. Please believe me, i have no problem with that, as long as Sa'id Kashua can win.

The other day I directed you to the article on education in Ha'aretz, about how Israeli textbooks also present a one-sided view of history (after all those years we've been complaining about Arab anti-semitism and anti=zionism in their textbooks). And now Kashua's 'narrative' is getting an audience. So people aren't ruined totally by their education, eh.

Abbas is proving to be the winner he promised - getting the Palestinians in good with our Arab neighbors, rejecting terrorism, thinking about improving the state of his people. I keep my fingers crossed for him. Now if only this coalition thing works, we may be in the right direction!!

Here's some catching up on old gaps:

I assumed too much that everyone knew the story of Holofernes. The book of Judith in the Apocrypha tells of an Assyrian tyrant who took over the town of Betulia. Judith, a widow, went to him with a basket of wine and cheese and got him drunk and chopped off his head, encouraging the Israelites to rebel against the conquerors. For some reason this story got meshed in with the Hannukah story. We always take the narratives we need, right?

The whole story of Hanukah, by the way, only got to be big after the Holocaust, I think, because we needed a narrative of success and survival.

TIME TO CATCH UP ON PAST PROMISES. I PROMISED A PICTURE OF THE AIR-CONDITIONING INSTALLATION. 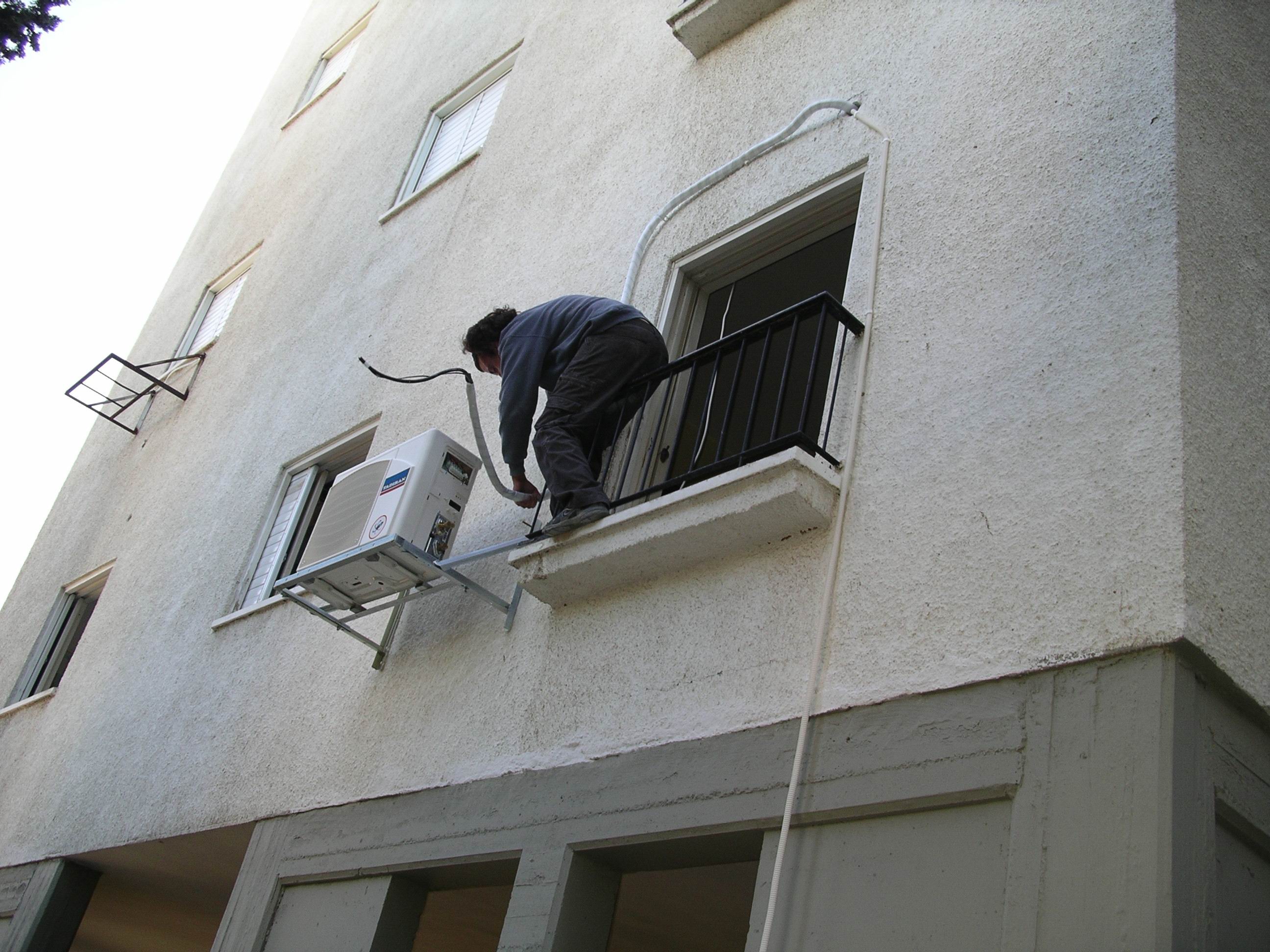 Now I see this is not a terribly unusual photo - but I saw these guys doing the same thing with Orit's air conditioner, hanging out of the window like that, and my heart stopped - while they could not figure out what i was marvelling at.

By the way, there are frequent and regular ads on the radio warning people not to take chances at work.

We are talking about banal things - gigs, comissions, contracts, etc. and different cities: London, Paris, Berlin. Then suddenly Moti says something about how he's been thinking about Germany lately, and how the German people say they didn't know what was happening during the Holocaust. He stops, then adds that we won't be able to say that.

He was talking about the foreign workers and the immigrant police. And every day I hear something else about people seeing foreign workers getting picked up and pushed into wagons, taken to the airport and shipped home. Everything sounds horrendous, and I have been careful to help hide people and help them get out since the government policy changed. But despite the really disgusting policies of this government towards foreign workers I remember many cases of this in England and the US . When I brought my first husband to the U.S. he got a letter from Grumman that they wanted to employ him and on that basis he got permission to work in the U.S. But by the time the papers came through Grumman had changed their project and didn't want him any more. So he went to work somewhere else. One night at 3 in the morning two men in grey coats banged on our door, waking all the neighbors and nearly giving us a heart attack. They were going to take him off to prison or something, and only when it turned out that we were married and I was a citizen did they let up.

I also have the papers of my parents to let them into England during the war. It says clearly and repeatedly that they will only be allowed to stay for a short duration because of the war.

So yes, we are awful. And the government policies, including the one about freeing up jobs for locals, are inhuman. And ever since I've been forced to take an Israeli to help me in the house I've been miserable. And all that. But I don't know how different we are from the rest of the world. I just don't know.

What happened to my parents after the war? Indeed they scrambled to find a country that would take them in after 1945. Palestine was out because they had shipped them back to Danzig in 1939 on the eve of the invasion. Lithuania was a graveyard to them, and anyway my father's convict status would have made it difficult. And then suddenly there was a survivor, my mother's aunt in rochester, who 'took them in.' 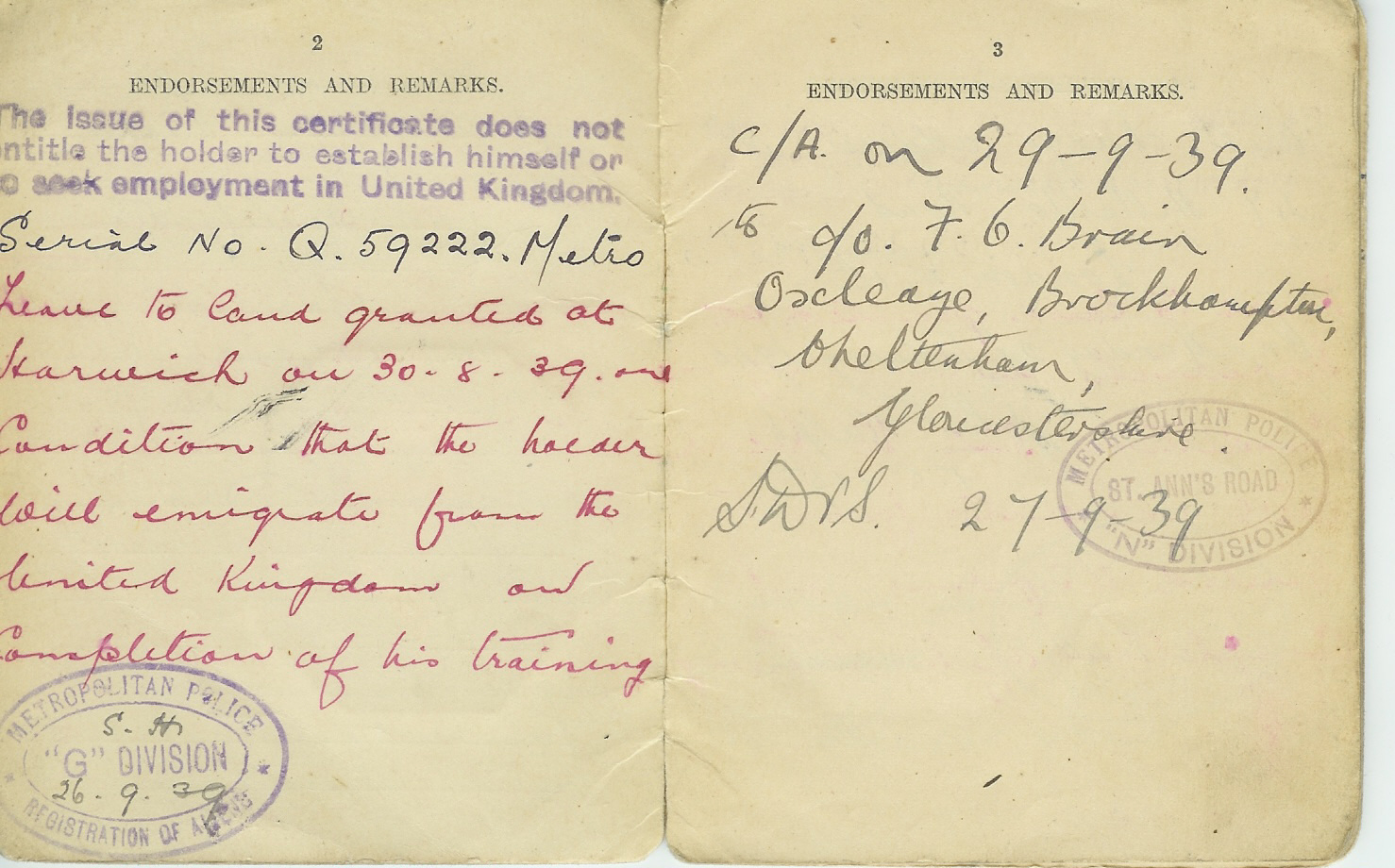 Zman Le'omanut, "Time for Art," the gallery-museum on Montefiore Street in Tel Aviv. I've written about it before at least once, here but each exhibit is like a new world. There is so much to learn, not only from the art, but also from the way the exhibits are put together The latest two exhibits - "There is no new nation," and "Shards" are very different but interact weirdly to create the effect of a third exhibit. "There is no new nation" is Jewish art in Israel. Here many artists, some known, some unknown, and many once famous but now forgotten, from the beginning of the 20th century, depict Jews. Gideon Efrat, the curator, discussed his considerations and his concerns about the refuting the standard narrative of the beginnings of art in Israel. We like to think that art sprang up here from the concept of a new nation, a new kind of Jew. But what Efrat shows is the continuity from the old world of established Jewish painters to Israel, how many of them came here and taught in Bezalel, how many kept their old subjects and transferred them to the streets of Jerusalem... And how many of the younger artists today try to reestablish the dialogue with Jewish and even religious roots.

I am always sorry the site is only in Hebrew and there is no translation in the museum itself, because it seems they have so much to teach the rest of the world about the complexities of Israeli art, and they limit themselves to a Hebrew audience. I am sure the consideration is financial but it is irritating, and it bothered me in the second exhibit, "Chards," (curated by Netta Tal Atzmon) which has some very amazing modern mosaics, showing the fragmentation of identity in contemporary society, with its connection to and distinction from the ancient mosaics in this part of the world. There was some discussion about how archeology was used to unify and develop a sense of identity in the beginnings of the State, but here works antithetically. Arab and Jewish artists show how they piece together the fragments of our society, sometimes with very innovative techniques and sometimes using the ancient methods. But I couldn't help but wonder why the language had to be solely in the dominant culture.