And now some local politics. In the light of the decision of the Minister of Education to fund separate classes for boys and girls in the religious schools, I have some suggestions. First, the party to which our eminent minister belongs - Yesh Atid - as the party of Yair Lapid, should follow the example of their minister and separate the men and women in their party. Different offices with male secretaries for male party members... Perhaps before the Knesset reconvenes (in two months)they will have time to build a balcony for the female members. I mean after all, the Yesh Atid party is holding the purse strings, they could do it.

But wait, will we need the Knesset in the long term? I doubt it. After all, since the same minister is now cancelling History and Literature matriculation exams, and the next generation will only know the past from religious studies, we won't need a parliament at all. We can go back to monarchies.

I got into my mind set already from the morning. When we got into the elevator there was another woman there, so I told Ezi to get the next lift since ours was only for ladies. At the shopping mall (the one next to Yair Lapid's home), I recommended the owner of Aroma Cafe to list separate hours for males and females. Everyone laughs.

Everyone knows this concept is only for the extreme religious population. Everyone except my American friend whose visiting for a few weeks. She saw that the public pool had hours for women only and went then. But the other ladies did not appreciate her presence. Not at all.

At the rehearsal run-through this morning I realized this show is really good. How Do they do it? I know too little. I didn't even know where Roy's studio was. With google it wasn't a problem getting to the address but once I found it, and managed to find a place to park, I had to find the studio in the building that was full of unlabelled Dental Technical Labs, I asked and asked but NOBODY SPOKE ENGLISH! It was all Russian. Until I finally decided to stand still and feel for vibrations I had no chance of knocking on the right door.

Because of the heat and my sensitive advancing age I'm becoming a night person. The other morning I woke up with some unidentified wound on my neck, red blood bleeding from one hole and the other hole scarlet but clotting. That's when I realized there are vampires in this country and I'm becoming one.

Politics first? Okay. We're still looking for someone to head our bank. Frankel might have been a bit of a shoplifter (or not - but he didn't handle it well. Leiderman might have sexually harassed some women. And now we have Mario Blejer as a candidate. All these guys have one thing in common - they studied with Milton Freedman who's work I've grown to hate more and more. That's it. I enjoyed mocking the first two, but the third is - unbelievable. He may be a perfect candidate for me because he seems to have somewhat abandoned the right wing, and supports Bernanke's policies. But for me the great irony is that he was married to Piroski Nagy, and since his name in Hebrew is pronounced "Blecher" then his ex-wife is - or was - FRAU BLECHER. Anyone remember? Do I have to spell it out? Young Frankenstein? Well, all right, here it is:

I'm sure her relationship to Strauss-Khan made me think of it.

And now to serious business:

None of my friends made it to this performance but I was thrilled that my family did. Here's my newest fan. 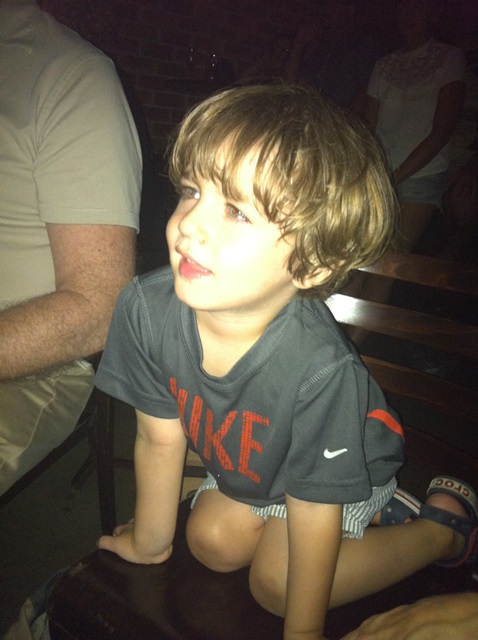 So many political issues, so few weapons.

The past few days has found me in the middle of many cafes in Tel Aviv. Landwer on Ibn Gvirol last night served us sandwiches so weird i was sure i was on my way to food poisoning. But then we went to Pappa's and Oren saved us with some of his secret herbal digestif that burned out all the rust. No one should eat mayonnaise outside in the summer. The cafe on King George the other night was much better (opposite Ozen corner Ben Zion) and today I had a meeting at "Streets" on King George that charmed me. 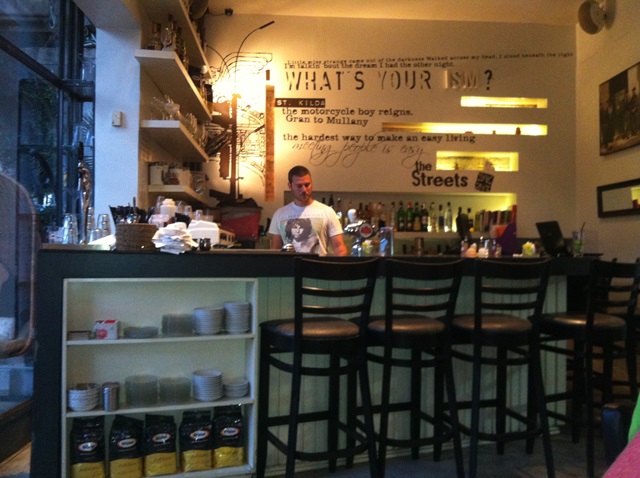 Right. It wasn't the food - the barman wore a shirt that said "An American Poet" with a picture of Jim Morrison.