Erev Tisha B'Av. Last year at this time I was in the labor room with Orit. This year I hope to be at a study group in Rothchild Blvd. Although I never know where a day will lead.

And it didn't lead in the direction of Tel Aviv, but to a shiva in Hod Hasharon. My wonderful old dentist who I will miss terribly. To meet with his fellow South Africans was a wonderful surprise - I saw how he got to be so great a human being. There is no doubt in my mind that people who set up charity clinics, assisted living, and all kinds of voluntary activities, have got to be the best in the country.

That was what this day of Tisha B'Av was about for me - how to get rid of the enormous social and economic and religious gaps in this country. If the temple was destroyed because of gratuitous hatred, we have not to mourn but consider how we can rid the world of gratuitous hatred.

The hatred in the world - the demonstrations, the revolutions, the fires - are not gratuitous. they emerge from great pain but they are reversible. There are ways to create responsible leadership here and in the world. In fact it is easier here. And maybe we can be the model.

Our own day was not that great - We went to the hemotologist this morning to discover that he had not seen the PET scan last week which showed the spreading of Ezi's cancer to places where biopsies are possible. This in itself was not at all unexpected, but in the five minutes he had time for us in between the half hour of telephone calls during which we waited between sentences, he managed to blame us for not doing tests he hadn't ordered, give us the phone number to call the surgeon to arrange the biopsy, and recommend we call him with the answers. Since he doesn't do call backs and doesn't answer his phone (phoner recognition) I know that despite our alacrity to obey his orders, we will have to wait a while before we get him to move.

In between blood tests and consultations for a biopsy, today was dedicated to helping to renew the Jerusalem Review. I would have loved to go to the poetry reading my friends are doing at 6, but have a doctor's appointment that can't be delayed.

In a moment of spontaneous freedom we decided to see the new exhibits at the Tel AViv Museum. I've been wanting to go for months but only tonight did we manage to get there. And there, at the entrance, was a crowd of people, protestors. The demands were basically for an actual artist to be on the committee choosing a new curator for the museum, but the feel and the taste was of total revolution. 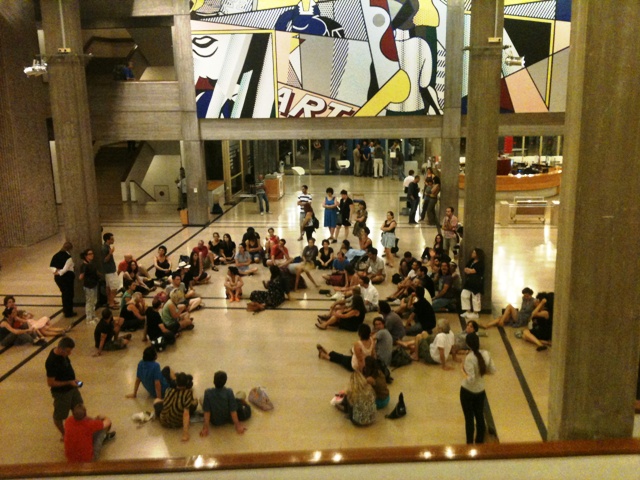 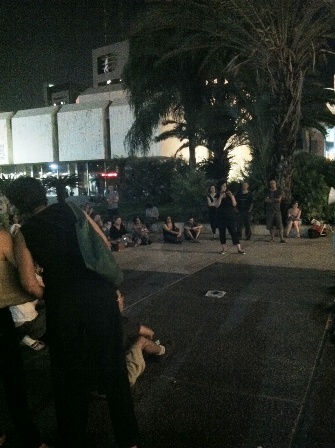 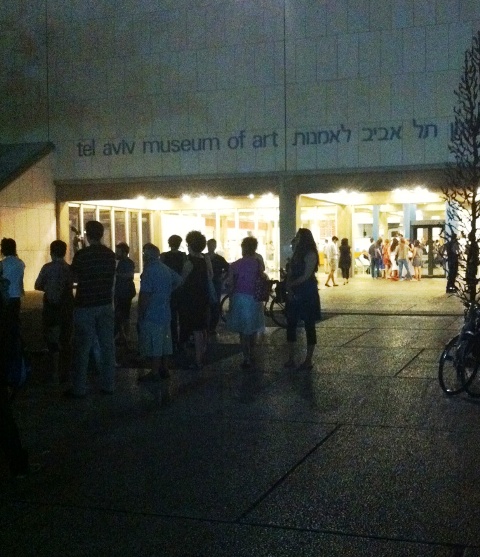 The Russian lady guards were immediately ordered to seal off all exhibits and we had no choice but to be part of the protest. So we left -

My point was, before I drifted off to sleep in the middle of a sentence, that the spirit of protest is everywhere. Even three-year-old Noa, who woke up in Disneyworld after sleeping the flight to the States, saw the crowds of tourists and began to shout: "The people/demand/social justice"