The story I have mentioned of my mother-in-law and the Nazis in these pages came backvto me today as i passed the place where we sat when she told it to me. It was in Cafe Nona, and we were sitting there during the days when suicide bombers were managing to explode themselves daily in Tel Aviv. "I can't remember when things were this bad in this country," she said, and then flinched, "Oh yes I can - when I lay in bed with my little daughters waiting for Rommel to invade." That was the first time I heard of the plan to exterminate the Jews in Palestine. Today I looked it up and saw this article about a documentary of Rommel in der Spiegel

Now I have to find the film.

This is Sara when she was persuaded to pose a few years later for an article about rationing: 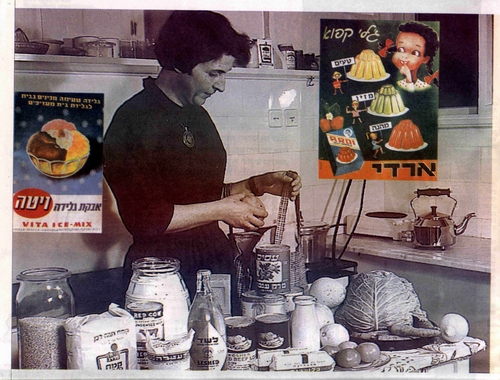 Notice the canned products - Ezi swears she never used them.

And while we're on the old photo line, here's a picture of Sara's mother and her cousins in Hebron. This is before the massacre. 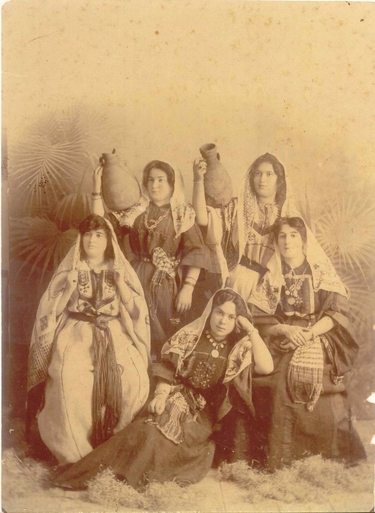 Would the British have deserted the Jews had Rommel invaded? Duh. While Sara was cowering in her bed her father-in-law, husband, and brother were building that bridge in Syria for the tanks to withdraw.

Here's the link that Jouke sent me to Rommel's Krieg. If you can follow the German you can see how close we all came to total extinction, and how Rommel was part of the plan to use the Arabs to kill the 60,000 or so Jews who came here to escape from the Nazis. There must have been an equal number of Jews living here from before. But now I have another fact to check.

And the Tunisian and Libyan Jews were taken away. I once had a Libyan cleaner, a totally mad woman who it was rumored murdered her husband by spraying his food with DDT everyday. She lived through some of the rounding up of the jews there - wore a star - but it was hard to understand what she was talking about most of the time. she didn't always make sense and she had this habit of pouring vinegar over her head that made me unhappy about being close enough to her to hear.

"Come on, enough with the general stuff," Rony writes me, "where did you have coffee today?" Okay - i don't know the name of the place - somewhere out of the way in Ramat Hasharon - very crowded with people in their forties plus, very pleasant, very tasty. It was like being in a different country. But I always say that - every area has a different population. These are comfortable, secure, settled people - not like the people from the main drag of Ramat Hasharon.

It must be the heat - I can't think about anything intelligent. And I dont seem to be the only one - all the news around here is stupid. That's why it took me such a long while to notice that the city - empty last year at this time - is crowded. No place to park. No place at the cafe. No place at the beach. I even heard today that the lifeguard - when he saw no one was listening to him - asked on his megaphone for a French translator. Ici on parle francais, says the hairdresser on Ben Yehuda Street.

All these people weren't here last year, I think as I'm dodging the slow walkers. Then I realize: That's why we're so stupid this summer. Its a delayed slow-down from last year's craziness.

An old-fashioned Shabbat. Except for a few forays to the recording studio where Panic is cooking up an amazing disk of my texta, we spent the day at home. I got my usual crank calls, my usual request from the neighbor to protect her from the cats, the usual old movies on tv like Shablul. My favorite part of Shablul by the way is the Yiddish karate instructor played by Uri Zohar who begins by teaching Pupik that the most important thing he has to learn is to stick out his 'techesl' for balance, and the second thing is the agressive look. The third thing is to give up karate and let the instructor defend him because it really doesn't suit a jewish boy. I don't know why but it grabs me every time. Uri Zohar became religious a few years later much to the shock and surprise of his many fans (So did Pupik). No one could figure out how such a wild liver could become - of all things - a rabbi. But when i see this shtik I realize that he was always obsessed with the idea of Jewish identity and its relationship to tradition. Even though the instructor falls in love with Pupik's 'techesl,' there's something very exploratory in the field of traditional identity.

There are no hotel rooms for love or money in Tel Aviv, the place is crowded with tourists, and Syria has rockets to flatten the city whenever they feel like it. Go figure.

I've been trying to work at home so my experiences in Tel Aviv are limited. But I don't have to go far to know what's going on. This weekend for example was a particularly bloody one for accidents. Even on our street. I didn't see it, but went to visit after the ambulance had taken away the victims. Some car had crashed into the behind of another which in turn smashed into a tree. 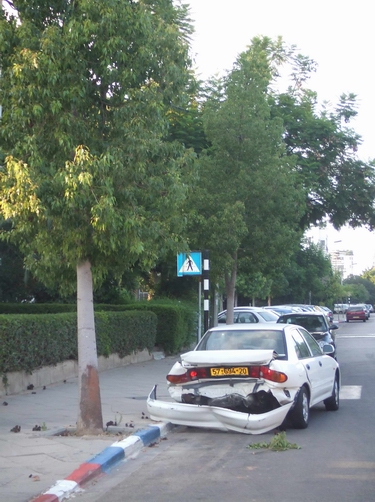 No big deal, but in the morning, just after the accident, there was a sign in the window that said "new driver." In the evening, when i went to take a picture, the sign was gone, ruining the irony of my art.