What can you do? Pizza! You can send pizza to people in shelters!

You can help the interfaith center at Maghrar: Yehuda Sokolov sent this: For those of you who do not know, Mghar has been subject to many rockets' attacks that unfortunately claimed also lives of two women and wounded many others.
Not only that this reality did not decrease the commitment of the group's members for the active building of a different future, but – as is the situation in other groups – the commitment increased as the need for it became much more evident. The members of the Interfaith Encounter groups in Mghar are now working day and night to take care of the children of Mghar in these difficult times. They do it mainly in the community center, which is IEA's partner in running the Interfaith Encounter groups in Mghar and also has the necessary protected area in it.
In this work they encountered severe lack of children toys and games. A package was sent to them from a sister-group, Eilat Interfaith Encounter, but more is needed. If you can – please send by mail to: Mghar Community Center, P.O. Box 765, Mghar 14930. They can also be reached by phone at: 04-6782416. I deeply thank you in advance.


You can donate to this site Let the Animals Live to help the deserted animals, wounded, frightened, who need to be taken care of.

You can support the arts, go to see the Jerusalem Artists House.

You can a petition to the UN supporting Israel's right to defend its citizens, return the kidnapped soldiers and stop Hizbollah's attacks. The petition is at Hillel

An old friend asked me why I haven't been posting poems lately, and it's only because they're not relevant. I'm writing - mostly in my head - but it seems trivial to write them down. Here's one from 1982 that's still relevant: To one in Beirut. There are some others on the same site from the same period.

This is pretty much a privatized war - citizens help in some of the places where the government hasn't gotten itself together. Hosting families who would otherwise be refugees from the bombings, sending food up north, doing whatever they can. It isn't enough, but there are a million people living in the north with serious problems, so everything helps. That's why I'm posting so many links to organizations trying to help. Esra is another one of them.

And this war is privatized because citizens are fronting for the army. On the side of Lebanon, it is a terrible tragedy, the numbers are inconceivable,and the suffering terrifying. On the Israeli side, we seem to have made a choice, to bear the bombings and endanger ourselves so that our soldiers do not take too many extraordinary risks, and so that the suffering on the part of the Lebanese people is minimized. Some people around here might say to bomb the hell out of Lebanon and get it over with but most prefer the greater care this method takes, even if it means hiding in shelters. And they vocalize this preference. Some others say to just stop and see what happens. (I wonder a lot about this - like if they're nice guys what are they doing with all those tens of thousands of rockets that could only be used to bomb cities and citizens...).

Yanky Fachler lives in Ireland. I haven't asked him yet for permission to print the following statement, but I think it should be read, so i'm printing first and asking later:

• I accuse the world media and the fickle public opinion of failing to respond with horror or disgust to the genocidal aggression of Hezbollah and its Nazi-like agenda
• I accuse Irish politicians of cheap and simplistic sound-bites as they demand that Israel retaliates in a more proportionate manner
• I accuse UN Secretary General, Irish Prime Minister Bertie Ahern, Irish Foreign Minister Dermot Ahern and others of using the phrase “disproportionate response” as a cynical weapon with which to delegitimise Israel
• I accuse the chattering classes of directing their anger against Israel for trying to protect its citizens, instead of against murderers who in the name of some peverted version of their god use women and children as human shields, and who use ambulances to transport weapons
• I accuse the media of failing to distinguish between Israel that never knowingly targets civilians, and Hezbullah that exclusively targets civilians
• I accuse Reuters of doctoring photographs
• I accuse media editors of accepting Hezbollah propaganda as the truth, and of sneering at Israeli statements as self-serving lies
• I accuse Unifil of active and passive collusion with Hezbollah
• I accuse the West of forgetting about a Nazi tyrant who within living memory cultivated a lethal climate of hysterical hatred that delegitimised the Jews
• I accuse Hezbullah apologists for ignoring images of uniformed Hezbollah terrorists raise their arms in a Nazi-style salute during their hysteria-fuelled hate rallies
• I accuse the political, journalistic and scholarly elites of cynically manipulating words, so that jihadi murderers become harmless militants, and their Jewish victims become war criminals
• I accuse those who ignore or downplay the annihilationist call to jihad uttered by Ahmadinejad and echoed by Islamic spiritual leaders around the world
• I accuse European politicians of being blind to a jihadi agenda that believes it can destroy Israel, win back Spain, and impose shari'a law in Europe
• I accuse the Muslim community in Britain of moral cowardice in its support of Hezbullah and other terror organizations that distort Islam
• I accuse European politicians of failing to see that the elimination of Israel is being actively planned and plotted by maniacs with the ability to put their plan into practice
• I accuse many in the Christian community for failing to comprehend that Israel is fighting in the vanguard of the battle for the right of Christianity and other religions to survive in a post-jihad world
• I accuse those Jews who have felt the need to publicly chastise Israel for its policies, of being overly concerned about what the goyim will think
• I accuse Britain of allowing the purveyors of jihadi poison to openly spew their genocidal filth in mosques up and down the country
• I accuse the organizers of arts events such as the Edinburgh Festival and the Irish Film Institute of pandering to populism by banning Israeli participation

ESRA is receiving requests daily and here are some of the areas in which we have helped:

ü    Financial aid for families from the North to cover food and baby supplies.

ü    Distribution of goods to equip temporary housing and hosting for families from the North.

ü    Thanks to the volunteers who have donated much needed clothing and household goods - keep it coming!

ü    And thanks to the many volunteers who have stepped up to help - your assistance is invaluable.

Please note that all requests are monitored to ensure that help is given where and when it is needed.

100% of your donation reaches those in need.

Donations may be forwarded to:

Donations from the may be sent payable to P.E.F. Israel Endowment Funds,

Donations from the may be sent payable to World Jewish Relief, The Forum,

. Earmark your contribution for

ESRA is an Israeli registered non-profit organization No. 580037455

I tell one friend I'm going away for 2 weeks. "Me too! We deserve two weeks away from this!" I tell another friend. He says, "I couldn't think of going away now - now with all that's going on." They're both equally good friends.

As we discover the weapons the Hizballah had -and have - we are more and more convinced of the enormity of the plans against us - of the fact that Russia has been arming irresponsibly, Iran has been distributing widely, and that plans have been enacted for the total destruction of us all. Few can argue against the decision made today to increase the forces up north. And few can argue against the pain it involves.

144 rockets today - our daily dose. We've had well over a thousand three hundred rockets. What will be left of the north and to what will the million and a half refugees go home?

I'm going away tomorrow for a short while. I'll be in touch if i have email. Don't worry. I'm in NY.

I'm not going away to stay safe - as Orit says - you take Israel wherever you go. Last night Nasrallah apologized to the israeli arabs he's killed (there are at least a dozen) and he warned them to leave Haifa. So he can kill only Jews. You don't have to be born in the blitz like me to appreciate the comparison.

Now that we are picking up (and picking off) Iranian soldiers in south Lebanon, it become even more clear who is in charge, that guy who keep asking for another holocaust.

There's a new song by Tal Segev called "What For." what's the point of our deep love if soon one of us is going to die. basically that's the jist. I wonder if the world knows to what despair we've come. How much our longing for peace blinded us to the arming of our enemies, and now forces us to rethink and begin to become bellicose. What was it that Golda said, that she could forgive the Arabs for killing our children, but not for making us kill theirs. 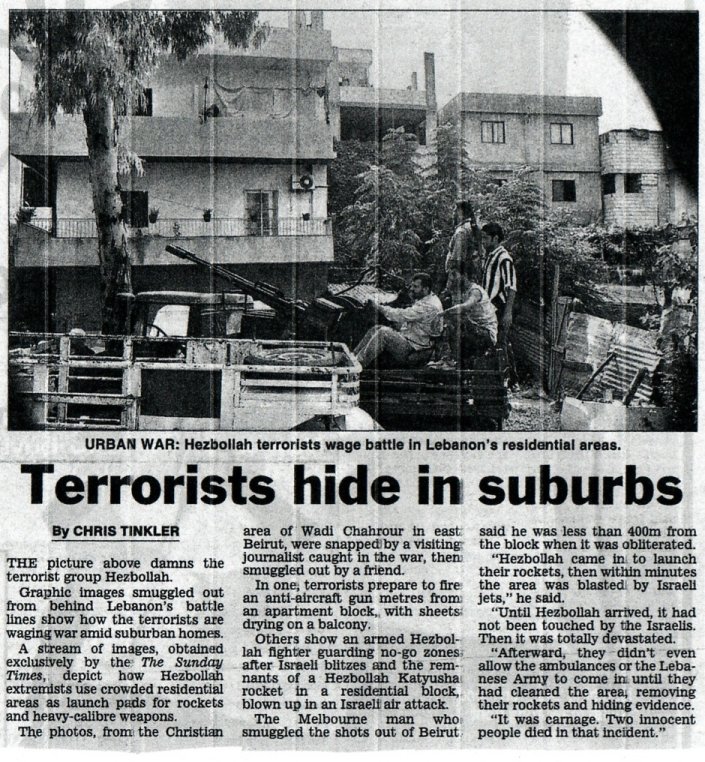 Unless something terrible happens I'm leaving for a little while. Check back with me soon.