Even if i am silent
I am thinking

even if i do not utter a word

never take me for a wall

There is just too much to digest - the strange fanatics who have invaded the vacated homes of settlers and are now screaming about being deported, the exhausted silent majority, the growing poor class who look out with impotent rage at the flourishing rich .

I'll give an example of each later.

In the meantime more immediate crises. While the police are busy down south with the demonstration of the settlers, some guy goes up north and kills three Arabs, innocent riders on a bus. Not enough police to control him or to stop him from being killed by an angry crowd. It is a terrible act of terrorism and is even worse given the fact that something in the national atmosphere makes an act like this possible.

But the acute and terrible crisis is one of many many chronic crises, greater and smaller. We're in the third week of municipal strikes of the Druze and Circassian villages because money promised by the government hasn't been delivered. No garbage collection. etc. to a people to whom we owe so much.

We've got hundreds of thousands of all kinds of people living under the poverty line. We've ....

Geula Cohen said today on the radio that Uzi Dayan was not only smart but daring, and that there we had enough smart people but were lacking in daring leaders. That was all she said that I agreed with. And even that only partially. Because we have Bibi. And in the long run he is not only not smart (not only because he's screwing the poor, AND going against disengagement, but also because his policies are not going to work for anyone - poor or rich - in the long run) but also because he's chicken.

But, as they say in Beit Levick, the Yiddish House I spent the afternoon with yesterday, "lomir reden fun freilecher zachen." "Let's talk about happier things." This comes after a long conversation between Tevye about the tragedies in their lives and their families, about Hodel's marriage outside the faith, "Let's talk about happier matters,.. what do you think of the cholera in Kiev?"

Actually, you might expect me to weep now over the sad state of Yiddish, but I was very impressed with the board members I met there and their dynamism. Beit Levick itself no longer looks like an old age home, and feels very good. The new lighting, plans for an elevator, sound system, etc., and most important, there are numerous younger members, plans, and willingness to head committees.

Beit Levick can be seen here.

Now Yiddish writers number in the 50s because of the new immigration from Russia. They need contributions, and you can donate from their website. Tell em i sent you.

The English Writers also has a site, but because we don't have a house and an amazing secretary like they do, our site is less impressive. Nevertheless, it's good. Here is the IAWE. We too need donations - for our journal, our

And get ready, we have an evening for the next arc in English on August 25, 2005. It will be at Beit Levick, 30 Dov Hoz Street, at 6:30 in Tel Aviv. There's another evening on the 31rst of August in Haifa. Details to follow.

Why do I get so involved in Writers' organizations? Because they are so basic to society, so deeply part of the culture, whether the culture recognizes it or not.

I learned to prepare my kitchen today for Kosher le-Mehadrin guests - well, more or less. But they were gracious, my guests, and ate carefully but warmly. It turned out to be more logical than I had thought. Most food here has a badatz label, and new utensils and paper dishes make it pretty much possible. Shabbat Shalom

The decision was suddenly made. We're going to California at the end of September. Even though there's a conference I really want to attend, I was going to cancel my paper because the other things I was supposed to do was cancelled. And then we realized we need a break from this place. Perspective. So I'm open to reading and lecturing invitations. Anyone out there interested? Usually when I go somewhere I'm pretty booked, but this is an adventure.

Apparently I've been blocked in some Arab countries. Some of the people who used to visit my site, and sometimes even comment, have disappeared, and I miss them.

I was amazed by how many letters I've received asking me to convey sympathies to the families at Shfaram. I'll publish only one press release, but there are many more individuals who feel this way.

Friday, August 5, 2005
NEW YORK: The Jewish Labor Committee unequivocally condemns yesterday's attack by 19-year-old AWOL soldier Natan Zada against Arab citizens of Israel in the community of Shfaram, in which at least four people were murdered.
JLC President Stuart Appelbaum said that "this act of terrorism by an unstable right-wing religious extremist, nurtured in the cauldron of hatred and intolerance, is an outrage condemned by the majority of Israelis, as well as the Jewish community world-wide."
"Our hearts go out to the families of the bus driver and the other victims of this attack. It is our hope that this horrible act by a deranged individual does not further inflame tensions between Jewish and Arab Israelis."

Why such an outpouring of condemnation? We need to distance ourselves from an act that we want to be so alien from us.

Robert Rosenberg at Ariga certainly has a good analysis of the problem.

I do know a couple of soldiers who got injured in a similar manner as Hillel described, by the way.

If you want to rinse your eyes, take a look at the site of David Najar. We've got a picture of his in our living room.

Why not do something actual and positive to stop terrorism?


Personalise and send to your local or regional paper please let UAT know about any successes.
Press release
For Immediate use
In a small number of days a largely unpublicised web site has attracted over 2,000 people from around the globe wanting to “Unite Against Terror”. Signatories include internationally renowned academics, journalists and authors plus (insert local signatories/yourself from) from (insert location).
Some have contributed short articles explaining their reason for joining the campaign
. These are many and varied including survivors of 9/11, London train drivers, philosophers and poets.
One of the most moving is from Alan and Franziska Norman who knew one of the victims of the London bombing Afghani refugee Ateeque Sharifi. Dedicating their signatures to his memory they explain he came to the UK after the Taliban murdered his parents only to die on 07/07 at Kings Cross. The go on to say:
“People are debating 'links' between the bombings and the conflicts in the Middle East. For us the link is very simple. Ateeque's killer acted in solidarity with the killers of his parents. Signing the statement is the least we can do to show sympathy and solidarity with his friends and his remaining family”.
Their full contribution can be read at www.unite-against-terror.com where the main statement is posted. Individuals can also sign here to demonstrate their opposition to terrorism.
Further information from:
info@unite-against-terror.com
Telephone:
Simon Pottinger +44 7970 494805
Etc

Diana wrote to me to ask how the army let a crazy soldier get away with deserting, much less run around with a weapon and murder innocent people. I have only a tiny example of my contact with the army.

When my son went into the army, he looked down at me protectively and said, "Do not worry that your role as a mother has now ended. It is now your duty to become intimately acquainted with my commander." And indeed I discovered more and more what I had originally felt with my other children, that the Israeli army is run like any other family, that it is composed of sons and daughters, and leans - usually - toward mercy, lenience and even turning a blind eye to irregularities.

There is much more to be said on this subject, but I have only a few minutes and have to say something about Bibi's resignation.

When one of my guests on Friday afternoon asked me if I was sure the disengagement would take place, I exercised my power as venerable hostess and virtual auntie and stopped the discussion by answering that I was sure it would, but that I was disturbed by the lack of dialogue in the process. This is the kind of sentence that can only be agreed with or inquired about, and therefore does not open an argument unless the 'other' has a lot more daring than most. It is not something I usually do, but it seemed to me that the question was unrealistic. How could it NOT take place? Only the fanatics seem to believe that something will come down from the sky and change the course of history. But Bibi's sudden resignation today was an attempt to play this kind of deus ex machina part, to pull down the government, to stop the process. And many say that he will now become the next prime minister, because everyone will forget that he signed the Oslo agreement, that he went along with the disengagement at first, and will think of the fact that his conscience made him pull out. Maybe it did. But it is a strange conscience that rises to the surface at strange times and then disappears.

Anyway Barak is beginning to look good to me. Even though he always has to prove how smart he is.

In any case, with all these enormous events troubling my life, I'm feeling like this picture: 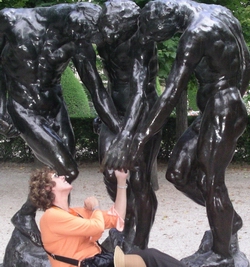 without the smile - Rodin's cast iron models here are tickling me, but they're bigger and much more powerful.

Anyway to get back to the disengagement, I now see how it is not be inevitable, and could be stopped at the last minute. But not by Divine forces. They wouldn't intervene. Sorry. I imagine that if God is involved he'd like to see Isaac and Ishmael give honor to their father together.

People are asking why Netanyahu quit now - after having been part of the government and disengagement for so long - but I suspect he quit because the poverty report is coming out - and he is going to get even more flack than ever on that. This way he's avoided the confrontation. He keeps saying that he doesn't want history to say that he was involved in disengagement but what will history think of a Minister of Finance who created poverty?

What could I have been thinking of? Has this situation driven me mad? Whatever could have made me think of Barak?