Bracha Kol was magnificently wicked as the Red Queen, but the children's opera "Alice in Wonderland" was a little too complex for my six-year-old. The afternoon picked up for him, however. when on the way to McDonald's we began to spot a lot of policemen on Ivn Gvirol Street. He is not one of those who feel an affinity with the guardians of the law, and became a little nervous immediately. So we walked the back way to our car, down Daniel Frisch to Dubnov and then to Shlomo Hamelech - when suddenly we saw them coming our way. 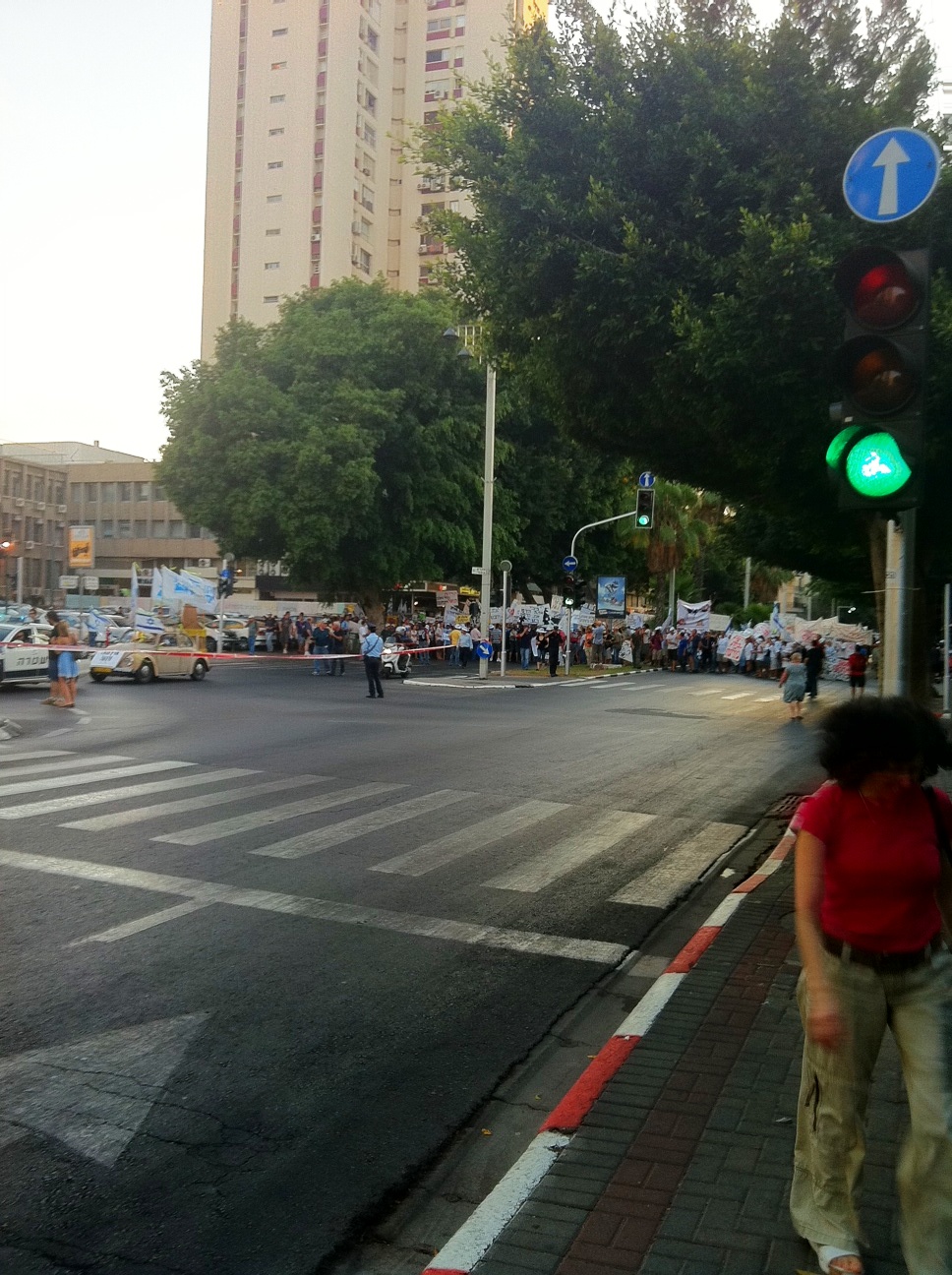 "What do they want?" asked the child - "These are dairy farmers," I explain, "worried about what will happen to their poor salaries when more imports are allowed." 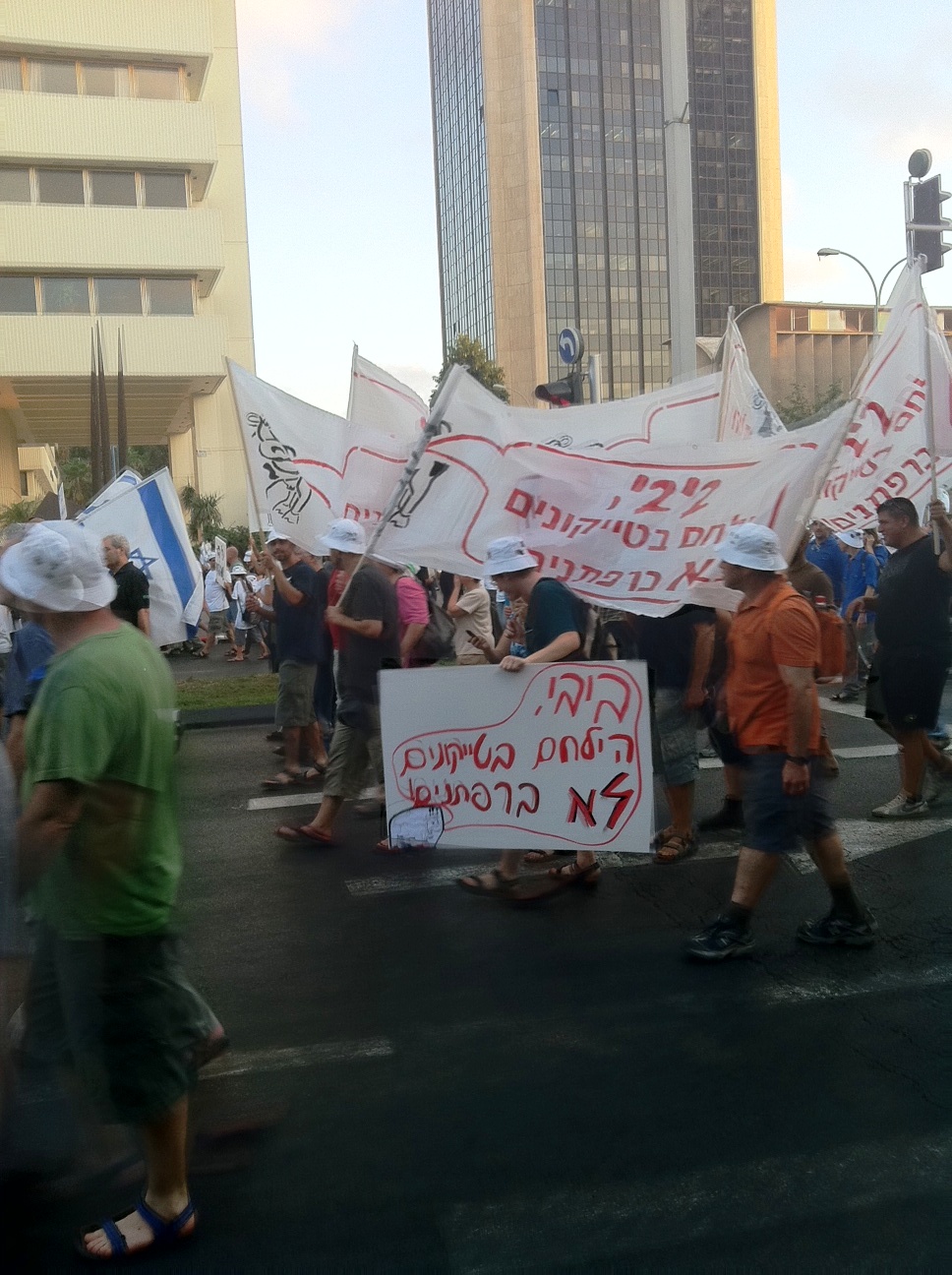 The crowd turns our way and came closer. "Why are they saying - punish the tycoons, not the dairies?" "They would be happy if he could reconsider the import laws and the cartel laws so that they might make somewhat of a profit." 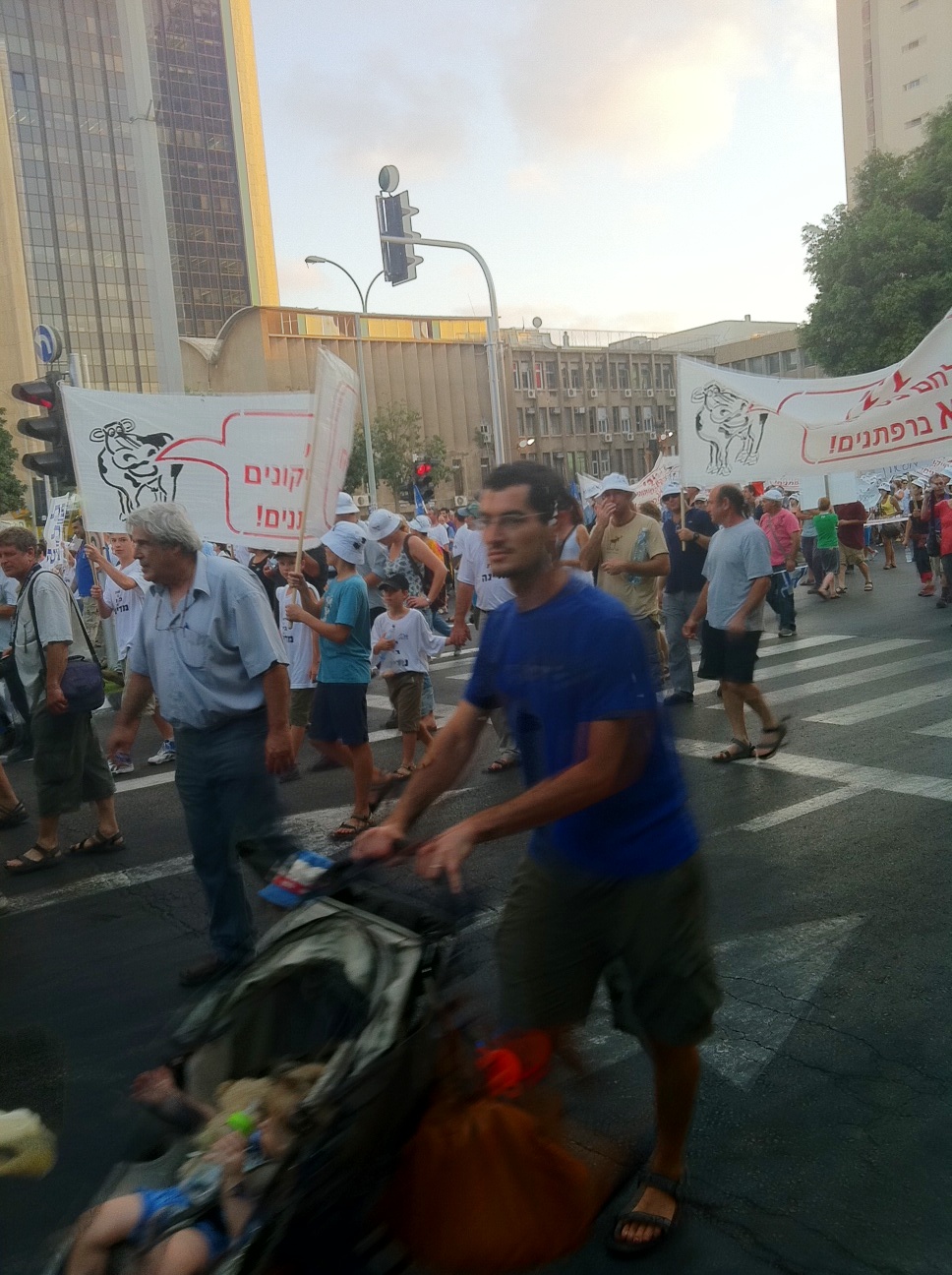 "Why are they shouting Bibi Go Home? Is this like Egypt?" At that moment I lost the paternal tone. The kid knows too much, I thought and answered - "this is not like Egypt because we can change the laws, change even the prime minister in a democratic process. We are - with all our faults - a democracy."

Our demonstration wasn't even in the news - there are too many going on - the doctors' strike is still going on, the taxi drivers strike snarled traffic today, and was followed by the teachers' demonstration ... Hey, maybe they're trying to tell us something. But then again, it is summer and not much else is going on.

Not much else is going on. We were in Jerusalem today at a bar mitzvah, and got back in time only to see the news and the summer live talk show on the main channel which was all about the Arabic programs we once watched with great fascination. The Restaurant, for example, or the Friday afternoon Arabic movie.

For almost thirty years I watch them,
the old Egyptian films with Hebrew subtitles.
Friday afternoon when Tel Aviv winds down
Cairo comes alive: the long-robed servants
cooking their masterÆs goose in the back yard kitchen,
the sly taxi drivers meandering the narrow streets
promising the visitor all manner of delights
in this mysterious cityģ the squint-eyed mothers
wringing their hands over what will happen
when Father
finds out.

Even if I miss them for years,
nothing changes.
They still keep the tradition for me.
Shukri Sachran still wins my heart
as he bends over the balcony longing
for the girl who disappeared
for no
apparent reason.
(We know
her misguided father has locked her up.)


Omar Shariff is still seducing
the sophisticated daughters
of the fifties.

(We know
heÆll marry them, in the end.)


as he sings
of eternal love
in the lush Cairo night clubs.


I love the way all the emotions blend ¢

Once
there was a poor orphan,
renounced by her ward, and sent
far away to an orphanage,
where she learned
from the cold nuns
to be a teacher.


But she longed
for more
and found employment
some where
in the outskirts of Alexandria,
at the lonely home
of a strange widower.


Do not tell me there are better things to do
with a Friday afternoon.
For me it is like shul:
even if I do not go,
what would Shabbas be
without it?

With the multiplication of television channels, the Arabic channel was separated from the main channel and although the tradition of the Arabic movie continues on Friday afternoons, we never remember to watch.

By the way, I wrote this poem at least a decade ago, and didn't know that there were two acts of thievery involved - not only were many plots from English classics, but in order to get the films for this series,Israel was resorting to all kinds of not-quite-legal methods.

In addition tonight I discovered the singer Noam Rotem - I heard him on the radio many times, but thought it was Rafi Persky. I love the social relevance of his work, and the clipped irony. Got to find his disk when it comes out.

But it's time to go back to reality and the fact that rockets have been coming at us from Gaza all day and will probably continue tonight.

Where did the day go? I lost the diary entry!

Later that evening: so it came to 320,000 - and half of our friends couldn't make it - either because they are too fragile, like us, or they have a terror of crowds. So double that number in theory. It is as if the spirit of the country has been crushed for decades and is now being born again. And the people are not unrealistic - what we want CAN be achieved.