and what do you know- no one sang hevenu shalom aleichem at landing. But when we got our gear and left the airport the pure patriotism rose in our throats. It was good to be back.

Yes we arrived to the quibbles of or neighbors - not just the big ones but the tiny ones too - the path in our garden was cast against the wishes of the majority. the guys in charge insulted at the lack of faith in them quit. and everything remains a mess. This reflects the country.

A strange sense of fantasy has accompanied my return to israel. i am sure it is jet lag and culture shock,but despite numerous inquiries, and many bombed houses, everything seems normal. My neighbors are still quarreling about the path in front of the house, my grocer looks a little more like he's drinking the vodka he desplays in his water fridge, and there are weddings and celebrations left and right.

I promised you a picture of my Macy's makeover at Lancome with Tarik Abbas: 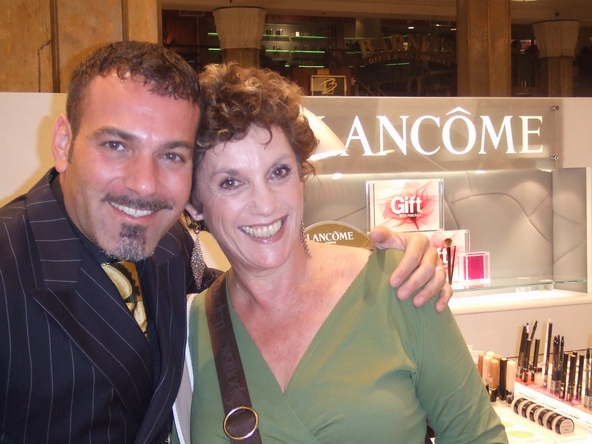 But since I don't usually talk about my frivolities, I should explain myself. I stopped at the Lancome counter because I saw Tarik was Lebanese. Now that did it for me. I suddenly felt at home.

How come you didn't take pictures? I asked my friends up north who barely documented their damages. They DID take pictures, they say - a few days after when they could get closer. But anyway their insurance doesn't cover... and the government isn't actually helping out too much... and we decided we've got to go up there and see what actually happened. So I think next week we'll go up to Metulla via Maghrar and Carmiel and find out. More soon.

Photography. Now there's a subject. Documentation. I've been realizing recently - as have most of the people in the world - that photography is no longer true documentation. Watching the footage of the captured navigator Ron Arad I thought it was probably very old, looked like a year or so after his capture. But then the whole idea of doctoring videos, making old news new, making up news, staging pictures, etc. suddenly came to me in full force. This was my first war where the whole idea of photograph didn't mean documentation, or even a semblance of documentation, but manipulation. The manipulation and staging was primarily on the Hizballah side; on the Israeli side there was simply an absence of visuals. And there still are a lot of pictures missing. But this is also the first war I experienced where official facts - from either side - just meant propaganda. That's why I need to go up north and see things for myself. Although I'll only be able to see one side, and only a little of that.

'Why are you so angry today?' Sally writes. 'What happened?' I think in addition to my sense of righteous anger over today's poverty report, I'm also very disappointed in the prime minister's criticism of the people of Tel Aviv who sat out this war in cafes. Even if it WAS true, and it isn't because so many of us contributed, if not our houses, then our efforts, to people who should have been taken care of by the government. But even if it WAS true, we had our share of terror and bombings, just a little while ago.