Being a companion to a patient in the hospital is a tough job. It's fortunate there's so much to do and i have to run around here and there, getting coffee, finding out about the parking, the social worker, etc., because the chair next to the patient is a killer. So even when i can sit down and distract Ezi, I need to go out to the mall next door to comfort myself with a little shopping. Not much to buy but I did need a new cover for my phone and who knows what friend may be hanging around the sushi bar.

Still, I came home too tired to listen to the news and way too tired to write. And last night Ezi had a bit of a reaction to the ritux - or more likely to the kubbe I bought at the grocers - so we had a totally sleepless night.

Today Ezi wanted to take my poor damaged car in to the garage but I was afraid he might not be the most accurate of drivers after a day of treatment and a night of pain, so i went with him. It's a very big complex of garages and hangars and Ezi wanted to see all the things the mechanic wanted to do to the car, so although i tried to keep up, I found myself alone in the labyrinth of cars and mechanics and garages, and slowly realized that i had been dumped. After all I've done for him, in the midst of all the machines he loves he forgot i was there!

We all get distracted easily, and I had almost forgotten the attack on me and my poem, when i got a call from the Times of Israel asking me for an op ed on it. Thank goodness. i really shouldn't let this go.

just a note - there has been a bit more talk than usual about the drug companies funding medical conferences and such, and I can't forget Chaucer and his description in the prologue of the collusion between doctors and druggists.

With us there was a DOCTOR OF MEDICINE;/ In all this world there was none like him /To speak of medicine and surgery;/ For he was instructed in astronomy./ He cared for and saved a patient many times/ By natural science and studying astrological signs./ Well could he calculate the planetary position/ 420 To improve the state his patient is in./ He knew the cause of every sickness,/ Whether it brings heat or cold, moisture or dryness,/ And where engendered, and of what humour/' He was a very good practitioner./ 425 The cause being known, the root of the malady,/ At once he gave to the sick man his remedy./ Prepared he was, with his apothecaries,/ To send him drugs and all electuaries;/ By mutual aid much gold they'd always won-/

The Times of Israel asked me to write a piece for their opinion page. so here it is.. i hope this particular experience is over because i have enough tsorus.

If you're wondering where my page disappeared to in the past few days, it was not a hacker or a disgruntled reader, but an html error i made. so sorry. i've really got to pay more attention to the details.

Read the article in the Times, react to it, and realize I am not trying to undermine the Israeli Army - i think we have to be strong and powerful and motivated. but i also think we should be aware of the responsibility that goes with it. I have nothing but respect for every soldier I have ever known. and i've known many.

Tomorrow is babysitting day - a terrifying prospect toward the end of the vacation. this summer has been strangely unstructured for school children, with no camps in the latter part of August and no places to go without adult accompaniment. My own days as a child were filled with camps and/or the library down the street, a place i came to adore. a place of individuality and escape. here the libraries seem boring and too far away for children to go alone. 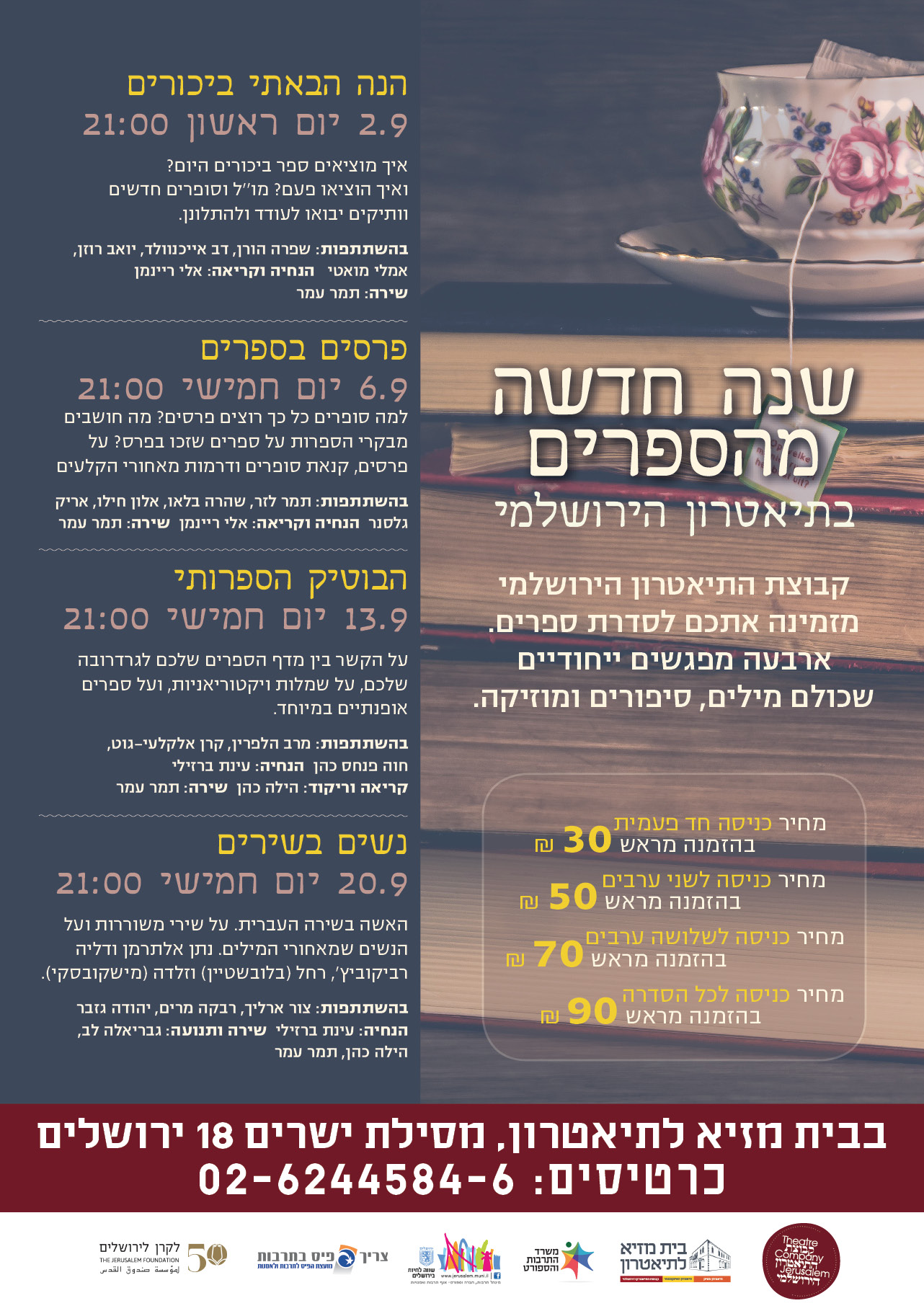 This is a notice of a few literary evenings I'm included in. Well, I'm only included in September 13, the one about clothes. in the Jerusalem Theatre. I know nothing about it, except that I will enjoy reading poems about clothes and art. if you're in Jerusalem, and want a respite from poetry about politics, come!

You'll have to agree I lived a charmed life - today my friend had a little lunch to celebrate her birthday at The Norman Hotel an incredible corner of luxury in a neighborhood that I have become accustomed to think of as frugal and modest. After all, the grandchildren who live in that area are encouraged to wear inexpensive clothing, "shuk chic," and discouraged from having iphones. this is contrast to other neighborhoods where the opposite is promoted.

Back to the Norman.